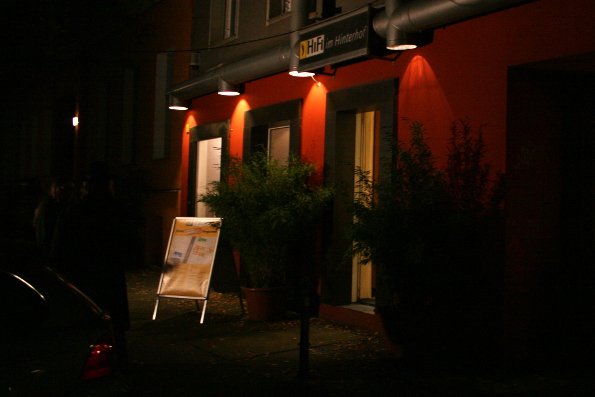 6. November 2014
The guest presenters are long gone, the demonstrations dismantled and the staff are back to being full hands on deck. What we are left with are the amazing times that were had at Lange Nacht der Ohren 2014, and ensuing discourse to in the coming days and weeks. Although these snapshots don't do the atmosphere and buzz of the evening justice, here are some highlights in photographic form

Up until the doors opened, we were still busy behind the scenes: final preparations being made and, as it turned out, much needed seating being arranged. When we opened up shop, we were happy to be met by a group of visitors waiting eagerly to kick off with us. As pictured below, our demonstration of the KEF Reference 5 Series was particularly well attended throughout the evening.

Johan Coorg’s lively presentation with its personal mix of German and English was in itself an experience to be enjoyed, despite most of our guests being primarily there to hear what the equipment itself was capable of. And capable it was: mastering numerous clips from across the genres (pop, rock, classical and electronic) with flying colours, the offerings from KEF really impressed, as did Coorg’s extensive wisdom on development and production, alongside some very philosophical observations!

The following hardware was used in addition: Even on the other side of the street, there was a lot to hear. AudioTrade, who distribute Ortophon gave us the pleasure of being instructed by their representative, Armin Kern, in a comprehensive demonstration of the Ortophon pick-up. Using the precious disks to show off what such a fine chain of audio fittings can achieve, we were also very grateful to his generous knowlegde that many inquries were met with.

The following hardware was used in addition: We were further fascinated by Richard Drees from Audioquest comparing the usage of different networks and USB cables, the later also including specifics designed for Apple mobile devices.
In addition to the conventional cables from Audioquest. Alongside their already outstanding range of cables within the Audioquest range such as the Forest, Cinnamon and Diamond series, what was demonstrated above all else was the incredibly positive influence a high quality digital cable can make. Going well with this setting was the discussion over the cables from Naim. Knowing that, Olaf Steinert was here to report from the frontline of the UK manufacturer on a device that may allow “un-hooking” for improved audio transmission. However, the real focus of the presentation was the comparison of All-In-One system and its individual components, as well as the many qualities and amenities of Naim technology.

The following hardware was used:

Another highlight of the evening was certainly introducing the new standards in surround sound Dolby Atmos. Despite a large amount of questions, Robert Schlundt and Dirk Witulski, ensured a seamless presentation through our home cinemas, and how new and existing components fuction with the new Dolby Atmos technology.

Robert Schlundt and Dirk Witulski ensured despite continued high demand for a smooth process and answered any questions about our home theater, the installed components and the operation of the Dolby Atmos technology. Additionally, our television crew made up of Robert Bode, Oliver Schrode and Stefan Zeltner; the headphone studio being was manned by Daniel Dimitrov and Robert Knaut; the additional guide through Home Cinema, Frank Wollsiefen; and the champion efforts of Emrah Cura, John Jurkat, Kay Moldenhauer all meant that the evening came together in an absolute success. Finally, we would like to thank our guest presenters for their support and all the visitors for their interest in this year’s program. We hope you had as much fun as we did, and have taken something special away from Lange Nacht der Ohren 2014.