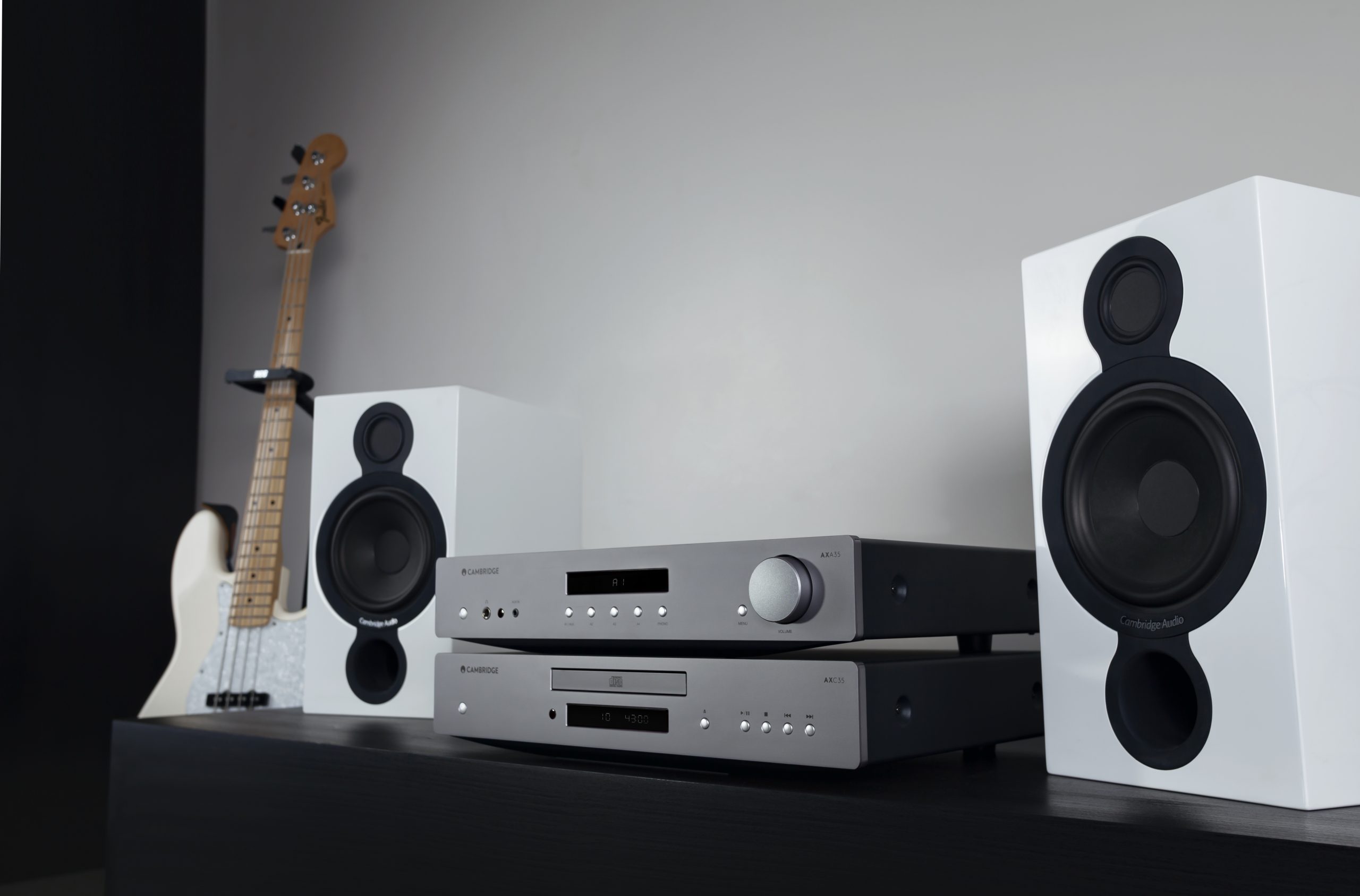 The British manufacturer has already made its business in the past to make good sound accessible to those people who cannot or do not want to spare so much money for HiFi. With the new AX series, Cambridge Audio continues this noble cause. Said series consists of a total of seven components. Consisting of two CD players (AXC25 and AXC35, and five amplifiers in varying configurations, the series offer high-quality sound at a low price. The explanation for the small price tag can be found on the back of the units: “Designed & Engineered in Great Britain – Assembled in China”. This is no longer an exception on the HiFi market. Whether the CD and amplifier combo of AXA35 and AXC35 nevertheless delivers what it promises, you will find out in the next lines.

AXA35
Behind the product name, AXA35 hides an integrated amplifier with an integrated phono preamplifier. The Cambridge Audio integrated amplifier relies on the classic playback via tuner and CD player, and in this case even record player. In terms of its range of functions, it is initially limited to the essentials, but it still has a lot under the hood in terms of sound. With a surcharge of 100€, it offers in comparison to the reality on a minimum reduced model AXA25 all kinds of additions. According to Cambridge Audio’s marketing department, the integrated MM phono preamplifier is basically the Cambridge Audio Solo. This is considered one of the best entry-level MM preamps on the market, and at €175 it costs half as much as the AXA35 alone. (More information on the model can be found in our corresponding blog post). Especially vinyl fans should be the choice between the two versions already at this point very easy.

In addition, the AXA35 convinces due to an additional LC display and the headphone output on the front as well as the Dreingabe of remote control. With an output of 2 times 35 watts, it also offers significantly more power than its little brother, which only has 25 watts per channel. Especially the generously dimensioned toroidal transformer clearly sets the model apart within its price range. On the silver-colored aluminum front panel is a volume control that is also made of aluminum. To the left of it is the menu button. By pressing it, the equalizer parameters, among other things, can be displayed and set in the dot matrix display. Digital audio players or other mobile devices can be connected via Aux In, for example. Four analog high-level inputs, including the phono input, as well as a recording output are located on the left side of the rear panel. As usual, the screw speaker connections are also located here, which also allow the use of banana plugs. Right next to the speaker connections, there is also a USB input.

Cambridge Audio’s small integrated amplifier presents itself as a real heavyweight within its price range due to its sensible and especially practice-oriented equipment – even though it won’t make any scales sweat with about 5.6 kg. Sonically, it knows how to convince with a lively and open sound. An effective channel separation enables a high spatiality and creates a large stage for your favorite music. Finally, however, it must be said that this Cambridge Audio amplifier is also not a performance miracle. It is not designed to play it on large floorstanding speakers, but it will primarily shine on smaller two-way baffles and cuts a good figure especially in rooms up to 20 square meters. 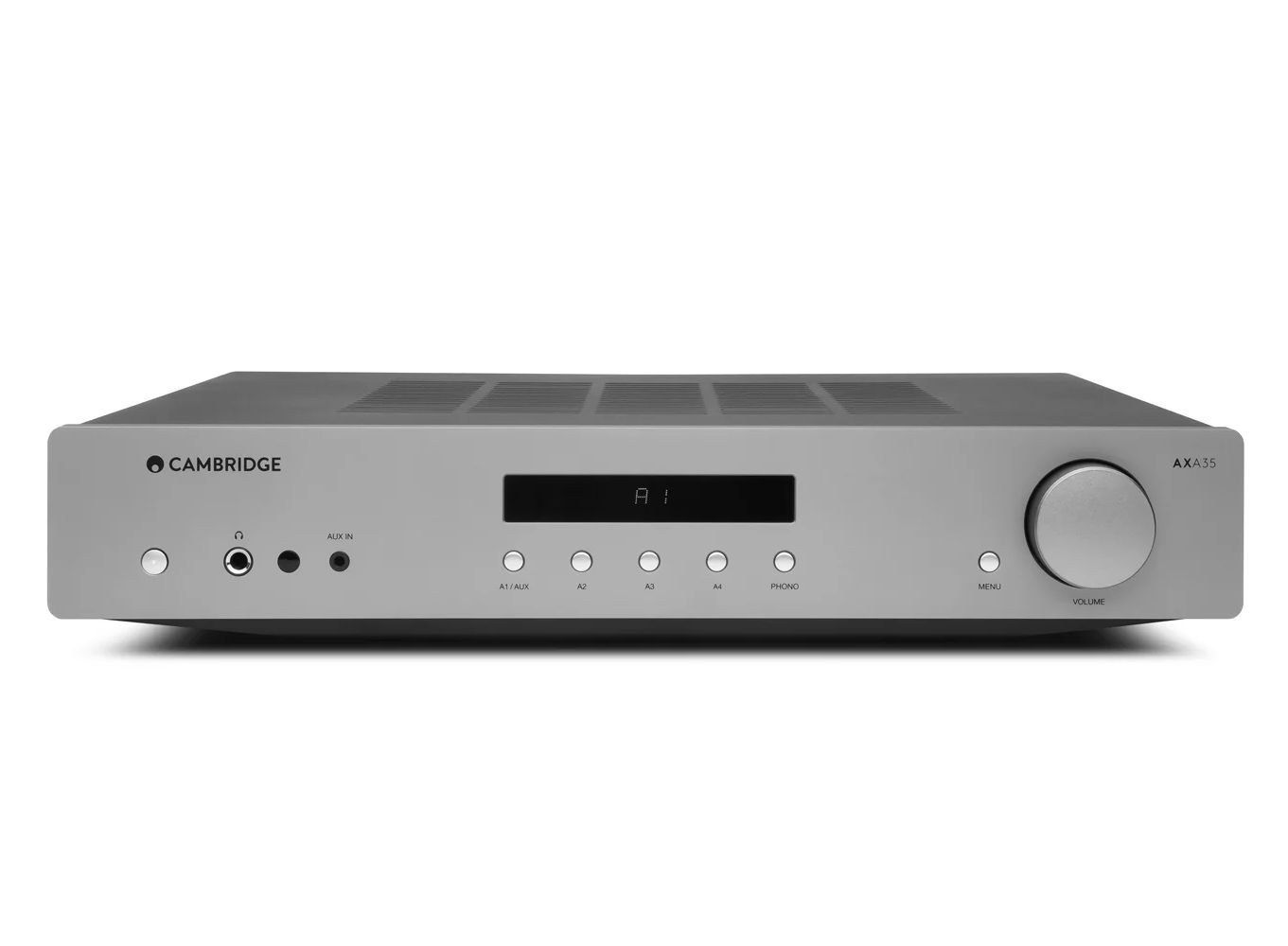 AXC35
The AXC35 is a real specialty within its price league. A cheaper CD player on this level is hard to find. The built-in, high-quality digital-to-analog converter (DAC) from Wolfson Microelectronics is particularly convincing.

With a frequency response of 20 to 20,000 hertz, the device delivers exactly the possible data yield of a CD – no more and no less. This statement can probably be made all-encompassing about the player, which does exactly what it’s supposed to – but on a really outstanding level. If one didn’t know that the AXC35 belongs to the entry-level league, one would almost be tempted to rate it higher. However, that would not at all mean that you would overestimate it. Even in direct comparison to much more expensive CD players from other manufacturers, the AXC35 didn’t have to hide. Especially its low distortion and the fantastically low jitter stand out. Offering high playability, there is no trace of digital harshness.

Besides regular audio CDs, the AXC35 also plays back specially recorded CD-R, CD-RW, and CD-ROMs with mp3 and WMA files without any problems. Two RCA outputs are initially provided on the back of the AXC35. An additional coaxial digital output makes it possible to transfer data from CD format to digital or to connect a separate DAC. The British manufacturer succeeds in creating a reasonably priced CD player, which is especially recommended for entry into the HiFi world. 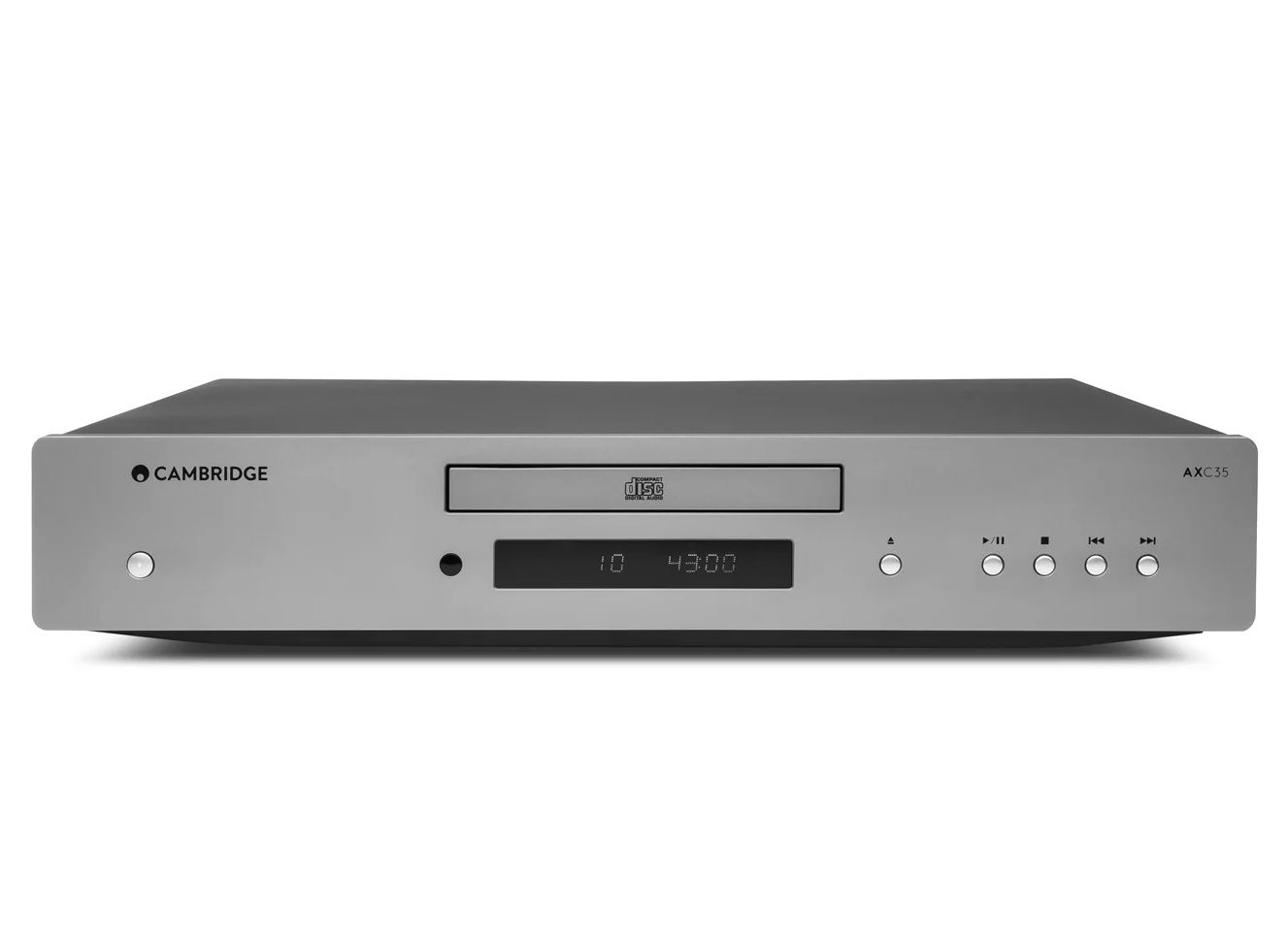 Final Thoughts
The AX series represents a democratization of good sound. You can only take your hat off to Cambridge Audio. Hardly any other manufacturer manages to provide such outstanding sound at this price. Using the AXA35 and AXC35 as examples, we believe that we have presented two special devices and have them in our range. We can only recommend these devices to beginners. In combination with smooth-running speakers, they truly play at HiFi level and will probably still mislead many HiFi enthusiasts in the future as far as the price tag of these natural talents is concerned.

Arcam AVRs Get An HDMI 2.1 Upgrade