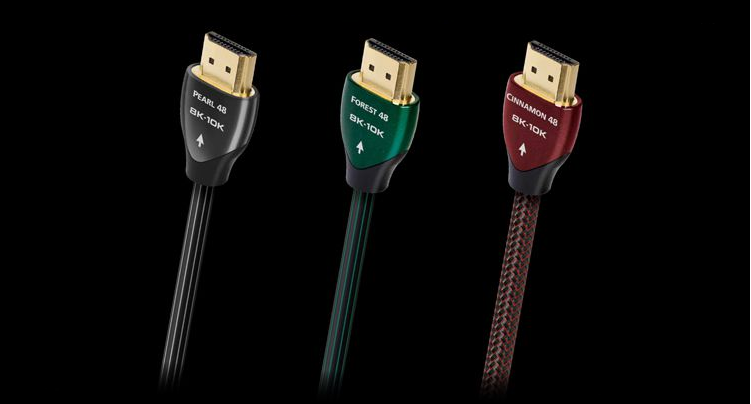 2. March 2021
AudioQuest audio and video cables have been in our range for a long time. But it's been three years since we reported on their latest HDMI cables. They still look quite similar, but in the meantime, the cables have received an update and are 8K and HDR capable. One more reason to take a look at the 48 HDMI 2.1 cables.

With the new 48 Series cables, Audioquest has put its focus on one thing above all else: Maximizing HDMI performance. Audioquest’s 48Gbps HDMI cables have bandwidth for video up to 10K resolution, as well as resolutions up to 8K/60 and 4K/120. Advantageously, the cables are all backward compatible to work with existing 4K displays. Available is the cable in three variants: the Pearl black cable, the Forest green variant and the Cinnamon red model. All three are available in lengths of 0.6m, 1m, 1.5m, 2m, 3m, as well as 5m.

Now you are probably wondering why the cables are available in three different versions. This can be explained quite simply: They all three differ in terms of cover and inner workings. While the AV conductor of the Peral, the cheapest version, is solid, long-crystalline copper (LGC for Long Grain Copper) and the reference ground is tinned copper, the Forest has the same reference ground, but the AV conductor consists of 0.5% silver. In addition, all 19 conductors of both cables are directional noise. The Cinnamon cable, the big brother so to speak, has an AV conductor consisting of 1.25% silver and a reference ground of again 0.5% silver. The smoke dissipation consists of a metal layer.

Why did Audioquest go to such lengths? That can be said quite simply: The previous shielding is no longer sufficient to provide adequate protection against the effects of the Internet, mobile communications and also radiation from satellites. This can also be heard. The conductors of existing cables, however, are directionally controlled, which minimizes noise. This happens by directing it away from the circuits. This ensures the best possible sound experience, because that’s what matters in the end.