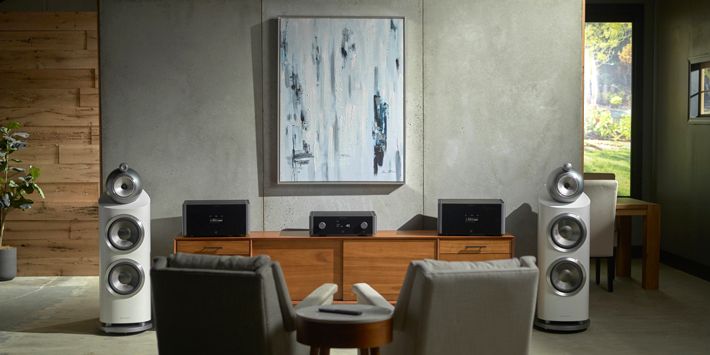 For many years, Rotel has stood for carefully and solidly designed hi-fi components, functional style and a mid-range price positioning. This does the experiment that has now been announced with the newly launched MICHI by Rotel series all the more exciting: MICHI not only brings a breath of fresh air to the well-known Rotel design, MICHI also sounds out what is technically feasible and has ambitions to stir up the high-end segment. Time to take a look.

A Rundown On The MICHI Series

Let us start with a few general remarks. The MICHI series, the name is, by the way, borrowed from Japanese and means “way” or “path” there, currently comprises three components, briefly titled P5 (preamplifier, DA converter), S5 (stereo power amplifier) and M8 (mono power amplifier). Optically, the devices are of course perfectly matched to each other: The cases are entirely black, with two heat sinks flanking the sides on the left and right. The elements on the smooth front are reduced to an absolute minimum: Power switch, LED display, the eye-catching MICHI logo, each arranged centrally on top of the other and, in the case of the P5, a selector switch as well as a volume control and the headphone output located below – that’s it. As you would expect, all connections are located on the back of the units. We’ll come back to this when we look at the specific characteristics of the three MICHI components below.

So let’s first take a look at the preamplifier with integrated D/A converter. The MICHI P5 is a Class A preamplifier of the highest quality. Its circuitry consists of carefully tuned components, some of which – as in the case of the two toroidal transformers used – have been specially developed and manufactured by Rotel. This ensemble of high-quality components is used to ensure a wide range of different applications.

The integrated phono preamplifier, which equalises and pre-amplifies both MM and MC signals, makes an external solution redundant.

Besides, the P5 has a separate subwoofer output so that the reproduction of the low bass spectrum can be additionally enriched if necessary. The analogue section also features one line, two pre-outs and four line inputs. Two stereo channels are balanced, as shown by the corresponding XLR sockets on the left (input) and right (output) outside in the upper segment of the connection panel.

In the digital domain, the P5 is also a master of its own; the digital section features two digital-to-analogue converters (AKM chips) operating in parallel and processing signals up to a maximum of 32 bit/384 kHz. In addition to the three optical or electrical digital inputs and one output each, there is, of course, a USB input (type B), which allows direct connection to a computer.

Unfortunately, the MICHI preamplifier does not have full streaming functionality, even though the Ethernet socket may imply something else. The LAN port is only used for updates and remote control if necessary. On the other hand, the topic of streaming has not been left out entirely: Bluetooth including The additional transmission standards aptX and AAC is also on board. In this context, it should also be mentioned that the second USB socket (type A) is only intended for charging mobile devices.

Something to note: When MQA data is fed in, the P5 recognises and converts it without any problems.

Let us now turn to the two amplifier components of the MICHI series. Here too, of course, the high level of quality continues. Once again, we are dealing with exquisite components and the powerful toroidal transformers from our own production. The architecture of the S5 stereo amplifier follows a double mono structure, i.e. the two 500 watt channels (into 8 ohms), although brought together in the same cabinet, are arranged in principle cleanly separated from each other. The sophisticated circuitry works in classic Class AB mode and combines efficiency and sonic potential in an exemplary manner.

The Rotel team is currently silent about the announcement of further MICHI components. However, the information that the results of the large-scale Research & Development project will be further used in the development of MICHI and that new Rotel product lines will be added at a later date gives reason to hope that we will see and hear more of the superb MICHI technology. Until then, we are looking forward to the three components. As soon as they are in our demonstration rooms, we invite you to take your time to get an impression of MICHI.

Perfect Audiophile Experiences On The Go: The Audeze LCD-1