15. October 2019
For over 80 years, Metz has stood for "Made in Germany" high-quality entertainment electronics, and the current TVs from the Franconian town of Zirndorf continue this tradition. We are therefore pleased to be able to present the Topas, Fineo, Micos and Cosmo models to you as an official Metz partner.

The traditional German manufacturer was founded in 1938 by Paul Metz and in the first years – in addition to a production program for Carl Zeiss – specialized primarily in the development of radio technology. In 1947, the know-how acquired in this way finally led to the introduction of the first radio receiver from Metz, which at the same time marked the entry into the field of consumer electronics. Further important milestones followed in 1955 and 1967, when the production of black and white (Metz 702) and colour televisions (Mallorca) began. These and the following models contributed to the long-term success and excellent image of the company, not least because of the exclusive distribution via specialist dealers from 1964 onwards. In addition, the company was also active in other sectors, producing flash units for cameras on the one hand and wooden housings for Metz devices on the other, in its own sound furniture factory. Later, the latter was even expanded to include Metz’s own plastic production. After Paul Metz passed away in 1993, his wife Helene Metz, who had already been responsible for the company’s finances, took over until 2010. After an insolvency in 2014 due to international competitive pressure, new investors were found and the company was split up. Today, Metz continues to produce in the Fürth area and has a number of high-quality LED and OLED TVs in its portfolio: Cosmo, Micos, Fineo and Topas. These are presented in more detail below.

We start with the top model Topas, which is equipped with an OLED display in sizes 55 and 65 inches. The ultra-flat panel sits in a noble metal case with a brushed platinum look on the back and is bordered at the front by a fine decorative panel made of black brushed aluminum, on which the characteristic Metz logo is emblazoned. Underneath there is an easy-to-read OLED display, which shows the time or the currently selected station (and can be deactivated if desired). To the left and right of it there is a black covering behind which the sound system of the Metz Topas is located – we’ll come back to that. After all, the entire construction sits on a solid and high-quality base, also made of brushed aluminium, and – this is particularly practical – can be rotated to the left and right at an angle of 30 degrees. Also included is a beautifully designed remote control with a brushed aluminium finish. As an alternative, the MetzRemote App for iOS and Android is also available in the relevant stores. 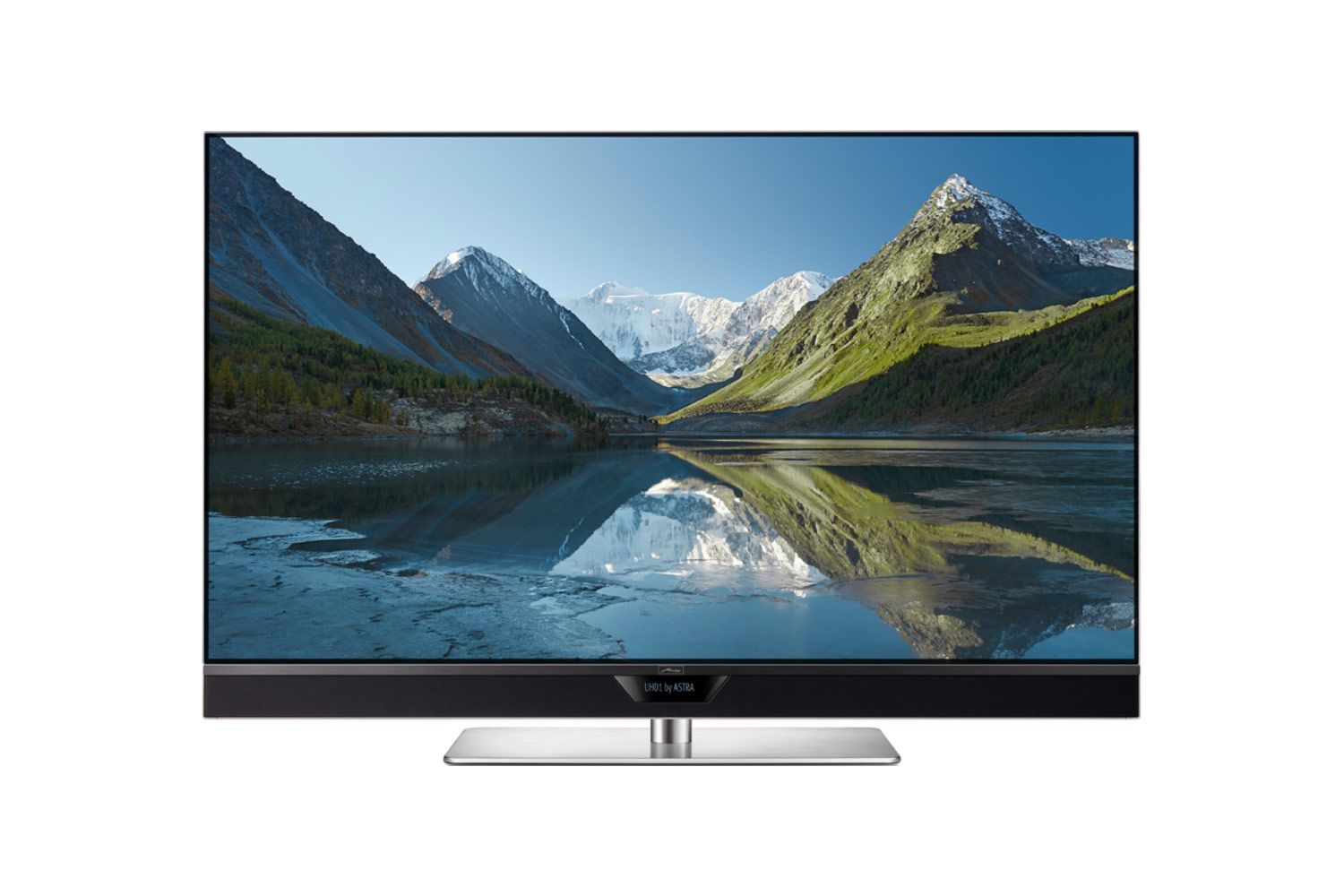 As already mentioned at the beginning, the picture is created using a current OLED display and offers all the advantages known from this technology – dynamic colors, perfect black and a wide viewing angle – in exemplary quality. 4K material, if available also with extended color space (HDR10 or HLG), comes to full advantage, signals with lower resolution are expertly extrapolated and polished. Altogether the Topas never tends to exaggerate, the picture always remains natural and balanced. In addition, the 2000Hz MetzVision image technology is used, which includes a whole package of measures for image optimization, including motion and sharpness correction programs that work without difficulty.

Let’s come back to the subject of sound: below the display there is an excellently tuned three-way sound system with two mid-range and one high-frequency loudspeaker on each side, which are additionally supported by a subwoofer. The sound processing technology ensures crystal-clear sound, offers further features from a parametric equalizer to the Metz Surround setting, which generates a more spatial sound image, and a specific frequency boost for better speech intelligibility.

Speaking of settings: Metz is known for its straightforward operating concept and all program information and menus are organized in a way that is easy to understand and intuitive. The digital recorder function is particularly noteworthy here. Thanks to the integrated 1TB hard disk and the Triple Twin Tuner, a program can be comfortably recorded ex works, even while the program is running, edited later and played back on demand.

Apart from that, the Topas has been equipped with all relevant interfaces and functions – from the fully equipped HDMI interfaces to various network features via Ethernet cable or WLAN (which can also be completely deactivated) to the Bluetooth transmitter with aptX support.

The next smaller model in the Metz range is called Fineo and we are concentrating on the 49 and 43 inch versions with LED displays. The design and features of these models differ from those of the Topas in some respects. Worth mentioning is first of all the foot construction, which is X-shaped in the Fineo and only allows a maximum rotation of 20 degrees. Furthermore, only a 2-way bass reflex system is used, which also produces a balanced and transparent sound image and is in no way inferior to the competition. 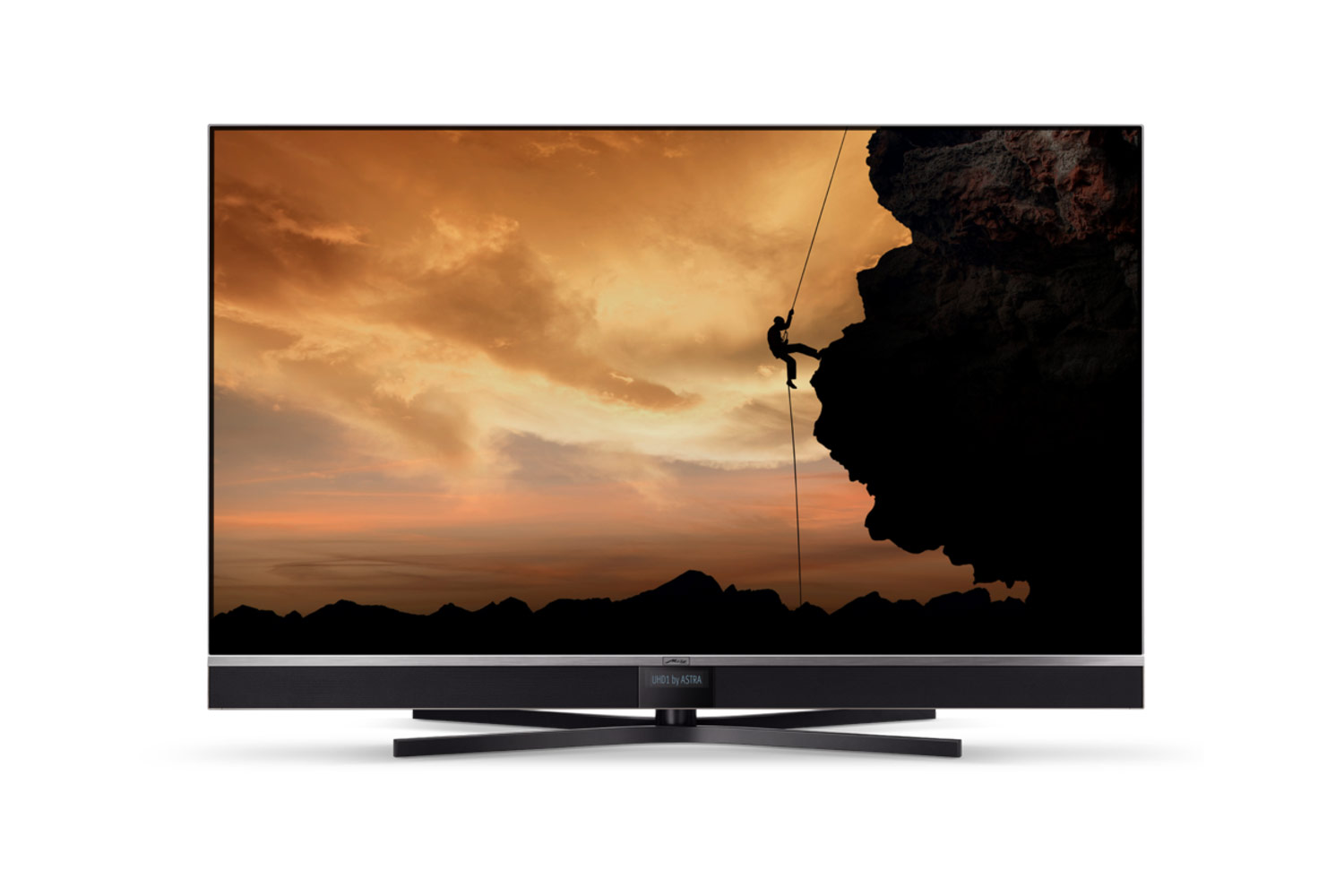 The biggest difference is undoubtedly that it is not OLED technology that is used, but a classic combination of LCD panel and LED backlight. However, Metz uses a so-called direct LED backlight with local dimming, i.e. individual areas of the LED lighting are divided into zones and controlled separately. In this way, dark and bright picture elements can be separated from each other much more finely and the picture gains overall dynamics and plasticity. The same applies to the integrated hard disk and the recorder function, whose capacity in this case is only 500GB. With regard to the basic ease of use and the other functions, the Fineo doesn’t make any major compromises and is therefore recommended as a high-quality option in the LED TV segment.

Finally we would like to briefly mention the two models Micos (49 and 43 inch) and Cosmo (32 inch). They complete the lower end of the Metz range, the Cosmo “only” has a Full HD display. Although the features of these two variants are not quite as luxurious, they are absolutely convincing and competitive solutions in their respective price ranges, so that it is definitely worth considering the Metz devices. 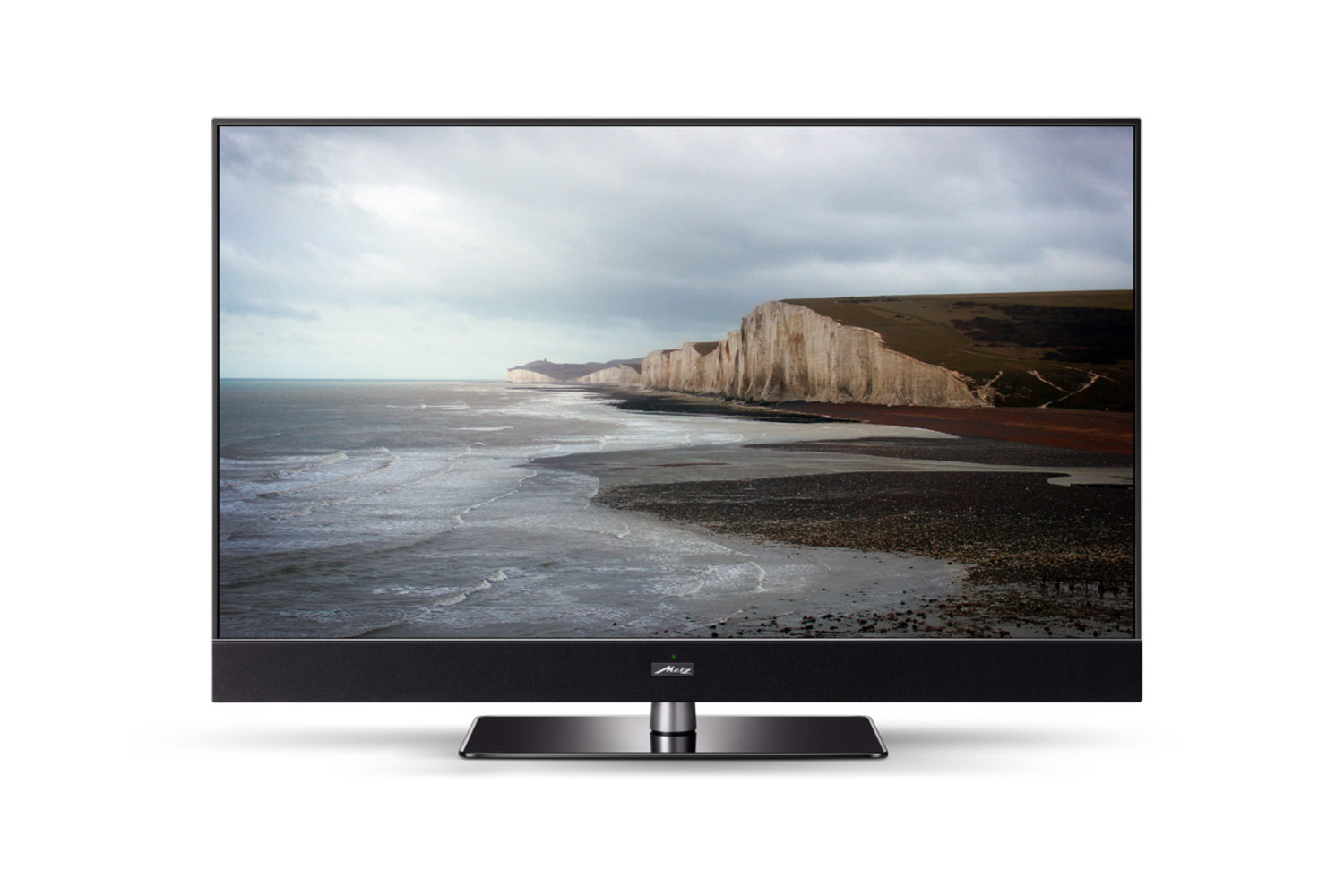 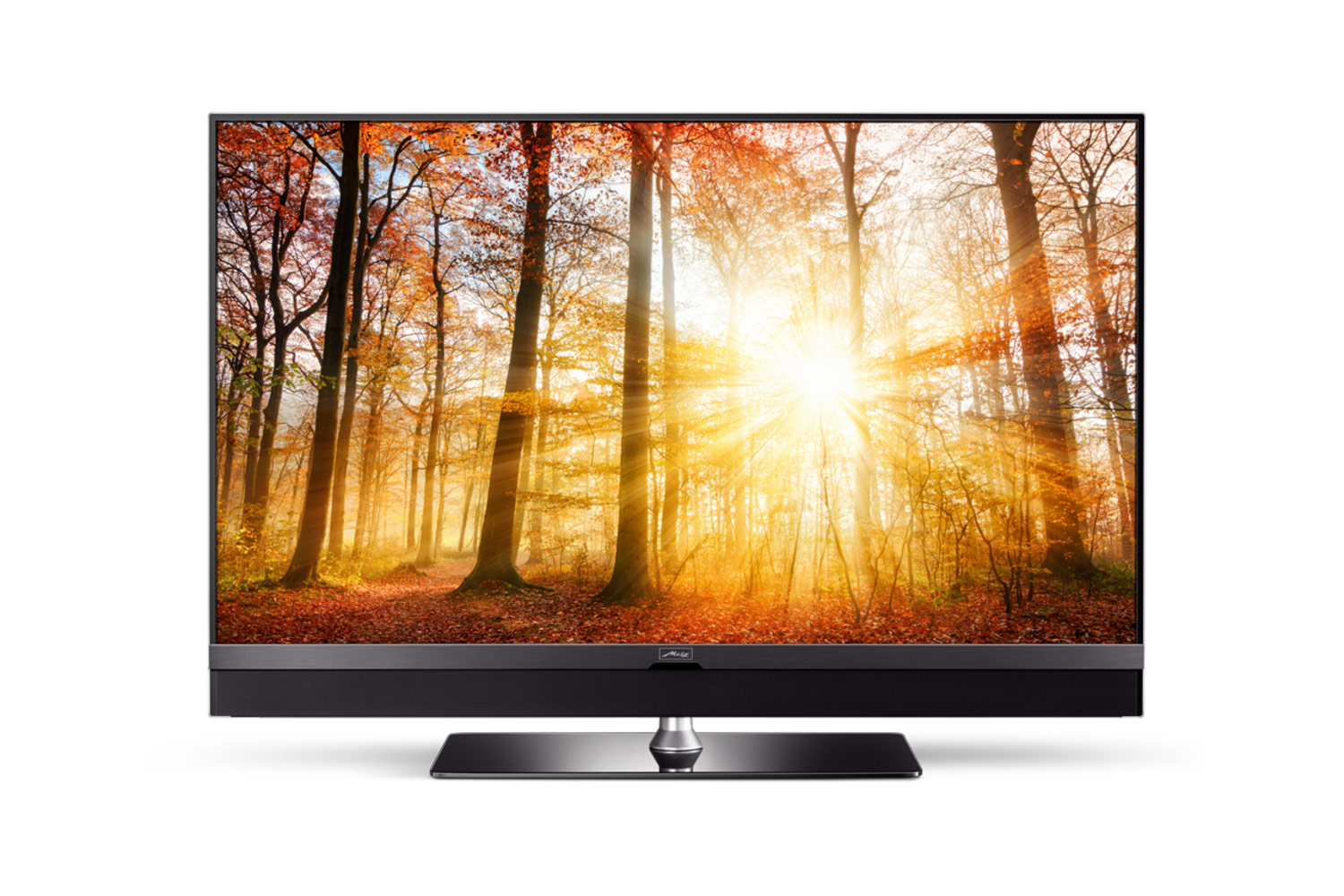 This brings us to the end of our presentation of the current Metz program. If you have any further questions about the individual models, please do not hesitate to contact us at any time. If you would like to get your own impression of the devices, this is now possible in our Berlin TV studio.

We look forward to your visit!

Just In: The OLED-TV S9A from METZ Blue