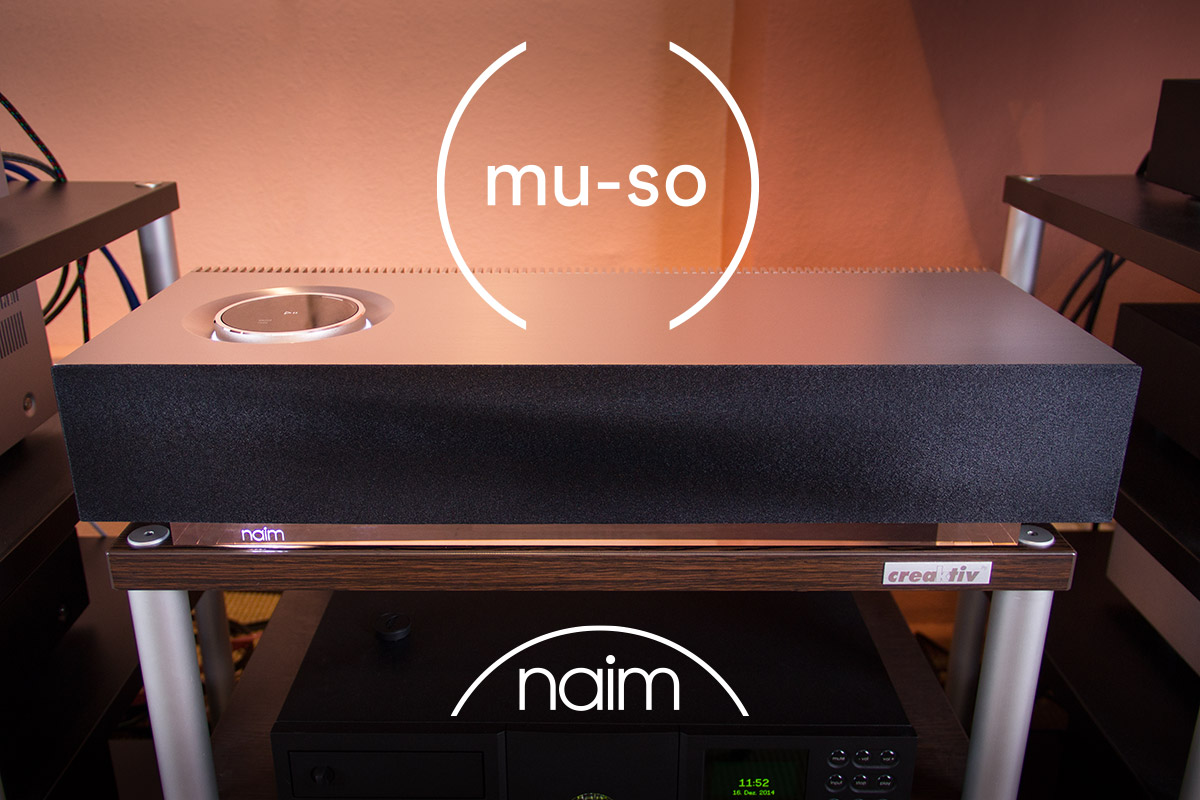 When heritage British manufacturer Naim presented its new release, Mu-so at this year's High-End electronics fair in Munich, it was met with great interest. Naim, now a renowned Hi-Fi specialist has been booming for years but at the same time the industry has been neglecting to those manufacturers specialising in streaming-complete systems. As high as the expectations were, Naim would manage to balance between flexible compact solutions and high quality sound. We take a closer, considered look at whether that such high expectations for the Mu-So were fulfilled.

Already at our intitial impression, our test leaves no doubt in our mind that it is certianly not just another Bluetooth-enabled shitbox but a serious, high-quality music system. With a not-so-compact size of 62.8 x 25.6 x 12.2cm and a handsome weight of 13kg, the Mu-So has been made to be both precise and robust. This is because it is comprised of both MDF material with a brushed aluminum- finish coated housing for sockets and for the large cluster controller, which consists of touchpad and rotary volume control. The latter, as well as the overall design of the Mu-So, is reminiscient of the typical outrageously priced statement series currently being produced by most other product lines. Accordingly the iconic illuminated green Naim logo is absent in way for a white, shining Mu-Su light. Rounding off the thoughtful-looking design concept by a anodized ventillating grill at the rear and a curved front in a deep black (which in the future will also be available the curved front in deep black, which will also be available as an option in the future in shades of Burnt Orange, Vibrant Red and Deep Blue.

The positioning of the ports is rationally organized, though perhaps not perfect. Located on the side next to the status LED, the more frequently used inputs for USB and analogue audio signal buttons are in a slightly recessed housing. The connectors for the power supply, the Ethernet cable and the digital audio input are beveled at the bottom of the unit. These are presumably rarely reconnected which is a good thing, because they are a little cumbersome. Although, as expected, the supplied remote is up to par it does not contribute a whole lot to the overall impression of the Mu-so. Via Ethernet interface receives the Mu-So wired contact to a network and the optical input provides, inter alia, the possibility of the Mu-so to use it as a soundbar, if the sound output from the TV set takes place as a PCM signal. By the way: If the TV only have an electric digital output, the signal through converter for the optical input is used to recycle. Regarding the wireless transmission, the integration into the house WLAN, Bluetooth is preferable in general. While working to communicate using short-range wireless standard is easily and ensures the support of aptX Codec – if this is also possible with the sending unit – even theoretically a decent quality in audio streaming, integration with a wireless network is, however, particularly in the combination with other devices such as computers or media servers, the more flexible and nimble alternative. Naturally processed the Mu so in addition to the more specific codec aptX all popular audio formats MP3, WMA, AAC, and Ogg Vorbis FLAC and ALAC on to WAV and AIFF. In this case, a maximum resolution of 24 bit / 192 KHz is supported on the cable run, the optical input is limited at 24-bit / 96 KHz and radio maximum sampling rate of 48 kHz are possible.

Although the music data is ultimately designed ultimately to go via cable, wireless connections needn’t be avoided because the remote control of the Mu-So with the Naim app has been created for both iOS and Android devices, making the system both fascinating and comfortable. The central importance of control in my app actually is demonstrated by full access to all functions and settings, only made possible by the control. We couuld be critical of this decision however there is a fundamental development underway of smartphones and tablets being increasingly used as third-party devices. As long as this fact is clearly communicated accordingly and the compatibility is ensured by a reasonable upgrade policy, there is nothing wrong with it especially when the integration of the two elements succeed as well, as is the case in our test candidates.

First, of course, a connection between Mu-So, my app and the network must be established. These are several approaches to choose from, which are explained all step by step in the manual. In the test we opted out for the variant of the Naim app, but it is also possible for example to crosslink the Mu-So app for the time being without smartphone or tablet and instead using the web browser on a computer wirelessly. Once the setup is complete, leave the main menu of the app all the inputs, the radio with a seemingly endless number of channels, the streaming service Spotify Connect and possibly over the network protocol UPnP (Universal Plug ‘n’ Play) provided music files to select. Access via Apple AirPlay and Bluetooth is also possible – we used iPhone software in the test. Overall, the app does a good job functioning as the control centre, and manages potentially multiple network-compatible Naim equipment simultaneously. A clear interface has reduced the menu down to essentials. Small details like the reflection of parameter changes on Mu-So controller; in the software, being able to hide and change sources and the different backgrounds within the app, the interchangable colours of the optional front panels – these features should not simply be dismissed as gimmicks. This is a piece of equipment obviously worked carefully in the terms of operating conveniently yet also visually and aurally to establish a connection between all the seperate elements – something that has been achieved.

All this would hardly worth anything if the Mu-So weren’t so adept at bringing quality to bring to the air. But even on this point Naim does not disappoint and the six class D amplifiers (á 75 Watt) present in conjunction with the specially developed three-way stereo speaker system, a pleasantly rich sound without outliers in the frequency spectrum. The positive impression remains at both low and high levels obtained and succeeds in Mu-So in addition to also contribute to the dynamics of a piece of invoice. In other words, does the conscious listening to music with Naim’s compact system genre boundaries really enjoy, but it is undoubtedly qualified for different tasks of the melodious background music, and the serving party sonication. Tone-sculpting stand next to the obligatory loudness circuit two more settings available that allow for an adjustment in the near-wall or free standing installation. The stereo stage is conceptually related not comparable to a full-grown and prepared in accordance speaker pair, which, however, was not to be expected and can therefore only partly be taken as criticism of law. Overall, does the Mu so when playing an excellent job. Although the Mu-So combines many good properties its real quality draws not on a single element alone. In case of their network integration, is at Naim’s newest prank to one of those things that are ultimately more than the sum of its parts. Consistently thought through act not only the workmanship, the design and the clear design of the device, but also the structure of the Naim app as well as the communication and interaction between the two elements together. The sound can be for a unit of this category leaves nothing to be desired, and thus the Naim recommend Mu-So as an excellent All-in-One streaming system.

Amplifiers: A Guide From Class A, Class B, Class AB to Class D