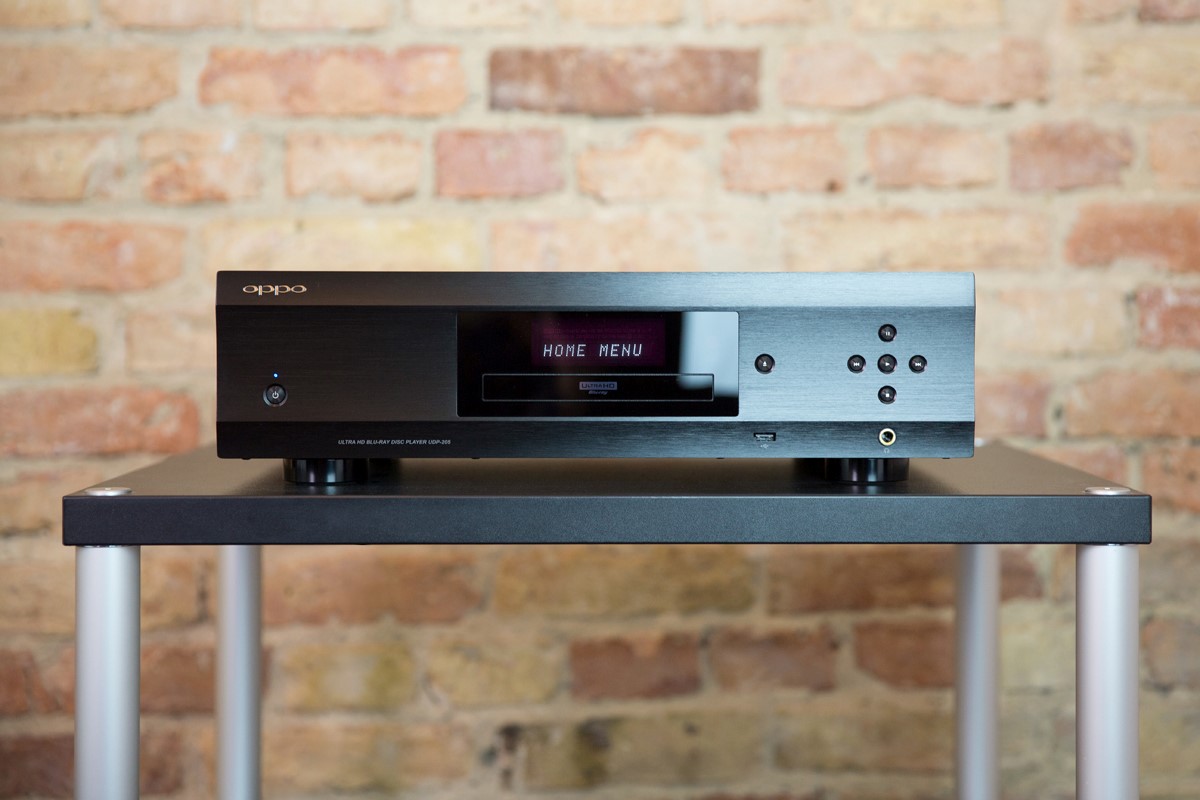 1. June 2017
Last year OPPO made a remarkable achievement with the UDP-203 in the category of 4K Ultra HD Blu-ray players. The OPPO UDP-205 has raised the stakes of the device concept and has presented a versatile player that combines the features of audiophiliac HiFi playback with first-class AV performance.

Let’s take a look at the basic concept of the OPPO UDP-205, its external appearance as well as its technical capabilities. Basically, there are the two major functional areas that have already been mentioned in the introduction. These are divided into different subcategories. In terms of pure stereo playback, the areas of source management (physical and digital media), preamplifiers / converters and headphone amplifiers, the AV section, media playback, video processing and the 7.1 preamp, D/A converter.

These different areas, of course, also reflect the connection field on the back. On the upper left, the stereo section is clearly recognizable, which – according to a Blu-ray player rather unusual XLR jacks – signals symmetrical according to the internal conversion. To the right of this are three digital audio inputs (optical, coaxial, USB type B) to feed material from external sources to the excellent ES9038PRO converter, which is currently the spearhead of the ESS Saber Pro series. If this is again avoided, signals can, of course, also be tapped digitally. An optical TOSLINK and an electrical coax-out can be found between the self-explanatory USB 3.0 sockets and the HDMI section. The latter allows the separate transmission of video and audio signals thanks to two outputs and also offers an HDMI input. In addition to various remote control options, the analogue multi-channel pre-amplifier outputs must also be mentioned. A separate ES9038PRO converter outputs up to 7.1 channels for any kind of power amp or active loudspeaker solution. Furthermore, the OPPO UDP-205 can be connected via LAN cable or WLAN into the network. The headphone input and another USB port are located on the front.

All this takes place in a straightforward and double-reinforced metal case with a noble-looking aluminum front. The connections are all firmly fixed in place, four solid feet ensure a low-vibration stand. Finally, the lavishly dimensioned ring core transformer and the precision drive can be mentioned in terms of hardware, which – as we will see in detail – and highly releavnt in terms of the disk.

For the use in home cinema, of course, the current 4K Ultra HD Blu-ray and the conventional Blu-ray (3D) are to be mentioned here. With regard to the use for the music reproduction, which will be discussed in more detail below, it is already said here that in addition to the conventional CD, rarer formats such as DVD-Audio and SACD were also taken into account. In addition, video files from USB mass storage devices or media servers can also be streamed over the network (via DLNA). Video portals such as Netflix or Amazon Video are not directly integrated and may have to be fed via external devices.

When it comes to the playback of HDR material, the OPPO UDP-205 is still limited to the HDR10 standard. However, a firmware upgrade, which is provided by DolbyVision support, is already scheduled. Furthermore, it has been ensured that the conversion of HDR material to SDR quality – for example when using a full HD projector – is at the highest level. Otherwise, there is little to say in terms of video playback – the OPPO player provides a first-rate video signal in every situation. Taking the audio features of the Oppo UDP-205 under the magnifying glass, the dual HDMI output is of particular interest. As a reminder, it was originally a workaround from the time when AV receivers were not yet equipped with the current HDMI standard, and a 4K signal from the player was transmitted directly to the TV or projector via a separate connection had to. Oppo has now thought about this emergency in the sense of a high-quality home cinema reproduction and developed a solution to make timing disturbances during the transmission of the digital audio data via HDMI (keyword: Jitter) as good as possible. The complete problem description including the solution describes Oppo very extensively on his homepage. We are content with this short version:

HDMI was developed primarily as a video interface and transmits audio data (bits and clock frequency) together with the video signal, so that no additional data line or bandwidth is required. However, the video clock signal is ultimately decisive for the transmission, whereas the audio clock signal is reconstructed from the former only after transmission. This process can cause errors, which can result in audio degradation. The separation of video and audio transmission now gives rise to potential for the circuit configuration of the second HDMI interface, since it is previously known that this audio signal must transmit exclusively audio data. Oppo has made appropriate modifications here, for example a specially crafted clock with a specific frequency, so that an optimal transmission of the audio signal is ensured. While the effect in PCM and DSD signals is always effective, the positive effect on compressed bitstream signals depends not least on whether a synchronous clock, which is based on the clock of the incoming video signal, is operating in the receiving device

Thus, a few key words have already fallen with regard to the supported audio formats. Before we finally take a closer look at the stereoscopic playback, be sure to be short and precise for the home cinema area: apart from the generally rare Auro 3D standard, the OPPO UDP-205 plays out all the formats that can be found in the home cinema – Including Dolby Atmos and DTS: X. If one uses the eight analog outputs, one receives crystal-clear converted surround signals, otherwise the player proves to be a reliable supplier in the digital way. It is also worthwhile to take a look at the operating instructions: There are a lot of different types of filters for the conversion to the possibility to use the dedicated stereo-out for the front-left and front-right channels.

Operation in the Stereo Department

As suggested in several places, the OPPO UDP-205 is ready to take the place of many well-defined HiFi players. The separate converter performs exemplary work, supporting PCM signals up to unlikely 768 kHz / 32 bit and DSD data up to DSD512. In this case, the multitalent is not at all selectable (WAV, FLAC, ALAC, AIFF, …), even other formats such as APE (a lossless codec from Monkey’s Audio) converts Oppos Multitalent without a problem. The quality of the signal, which is internally symmetrically transported after the conversion, meets the highest demands – you have to drive up a heavy gun to punch out the Oppo UDP-205. The only drawback: just as Oppo, the integration of the popular video streaming portals have renounced, one searches synonymous in vain for vendors such as Spotify, Tidal and consortium.

If you look at the lack of integration of music and video streaming services, the OPPO UDP-205 offers pretty much the most complete package you can ever imagine with a Blu-ray / Multimedia player and in a very impressive quality , The UDP-205 is an excellent choice for high-end home cinema solutions and / or combined applications, however, whether hi-fi enthusiasts prefer the oppo player of a corresponding special solution.

Sony Bravia A1: The First OLED Televisions From Sony