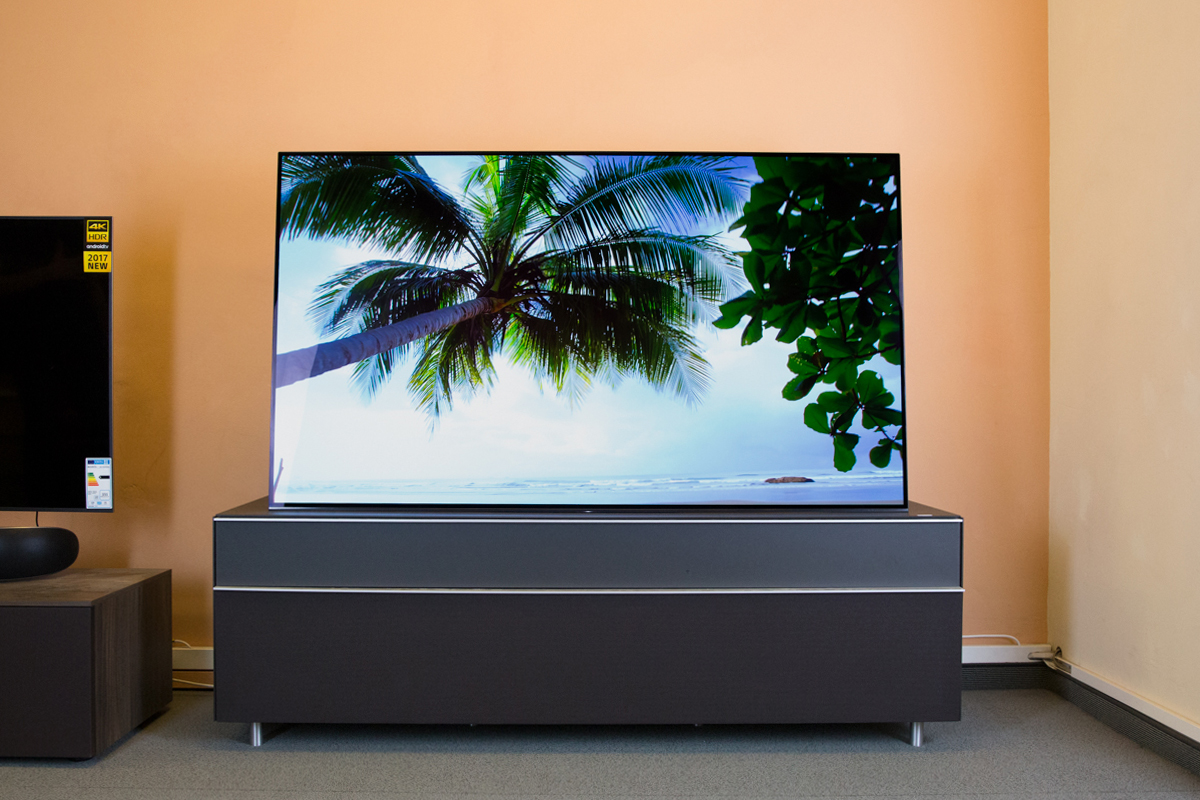 30. May 2017
This year Sony is venturing into new territory in several aspects with its two new television models, the KD-55A1 and KD-65A1. These two are the first fully-fledged OLED televisions from Sony although the brand had released a compact 11" format in 2009 however since then the design and sound concepts have seen a lot of experimentation. So let's clarify whether the results of these experiments can be seen (and heard).

Let’s first take a look at the Sony Bravia A1 models which are remarkable in several respects, firstly with the characteristic absence of different elements that one would normally expect; no stand, no built-in loudspeakers and no soundbar from the screen, no Sony logo (only discreetly placed at the lower left edge) and no status light (can be deactivated). Sony has removed any redundant optical features leaving the absolute focus on the picture. And that can be quite impressive. But before we look at the display quality, we first look at the back: There is the stand, runs obliquely to the display and closes flush with this on the preferred shelf. At the lower end of the cover covered with fabric, the connections are located – thus ensuring an unobtrusive and orderly cable routing. In detail the devices have: 4x HMDI (2x 4K HDR capable, 1x ARC), 1x Triple Tuner, 2x USB (and 1x side on the TV), Ethernet jack (and WLAN), 1x AV In (analog combo port) , 1x 3.5 mm audio / subwoofer out, 1x optical audio out. This should not leave any wishes unfulfilled. Furthermore, it is of course possible to mount the Sony A1 TVs on the wall. The suspension is also carried out on the base, which is, of course, folded beforehand on the back of the panel. Whichever option is ultimately decided, concerns about stability are unfounded. In particular, the design appears unusual at first sight, an additional weight on the foot and a metal strut extending from there to the display back ensure sufficient stability.

Let’s come to the actual highlight of the new series: the OLED display. After LG has established itself as a leading producer in recent years, it is hardly surprising that Sony is taking advantage of the technology of the competitor. The current 2017 displays, an optimized version of the previous year’s model, are being installed. Obviously, the usual advantages compared to LCD / LED panels – the pixel-precise control results in fantastic black values, rich contrasts and intense colors.

However, the final picture quality is by no means dependent on the panel, the image processing and optimization technologies operating in the background also play a role that should not be underestimated. Here, Sony fully relies on its own achievements, which thanks to the 4K HDR X1 Extreme processor with more than sufficient resources operate. Of particular note are three technologies. The object-based HDR revision does not analyze material that is not in HDR resolution as a whole but identifies associated imaging elements to optimize them separately. In contrast to a general color or brightness correction, this results in significantly more differentiated results. In addition, the Super Bit Mapping refines the color coding encoded in the video signal. Conventional 8-bit and 10-bit HDR signals are dissected and computed to 14 bits. In addition, Sony is using image optimization on large image databases. Thus, the data of the currently displayed image is compared with matching information from Sony’s databases and on this basis, on the one hand existing image noise is effectively suppressed and on the other hand the detail representation is optimized. In addition, the motion flow algorithm, which provides very good results with a little manual fine tuning, is also mentioned here. Another word on the HDR playback: HDR comes on OLED TVs generally very well to the validity. The Sony TVs are no exception here and present signals with enhanced dynamics capture in beguiling quality. Although it is currently only supported the most widely used HDR10 standard, which is usually used on Ultra HD Blu-rays. The two alternatives DolbyVision and HLG (Hybrid Log Gamma) should be submitted by firmware update.

Two details on the back of the Bravia A1 TVs we have hitherto underlined, as they deserve special attention. In this case, the horizontally extending component, which is located directly on the back of the display, must be viewed first. This houses two so-called actuators on the left and right, which actually vibrate the OLED display itself and thus transform it into a large high / mid-range stereo system. This is made possible by the flexibility of the OLED panel – with your LCD / LED screen such a sound concept would not be possible. In the upper part of the foot, a subwoofer was installed, which gives the sound more depth. As with all other TVs, the sound does not reach an external sound system, but you can hardly avoid the engineers: the sound is good and the concept in the TV area is a successful innovation. Finally, a few words about the software are said. Sony continues to rely on Android as an operating system and accordingly, functions like voice control and mirroring of mobile devices are implemented on the TV via Chromecast and of course the Google Play Store. Furthermore, various streaming providers such as Netflix, Amazon Video, Maxdome and Spotify were integrated and also communicate via Bluetooth the Sony Bravia A1 TVs. The menu corresponds to the currently known state of the other Sony TV devices and can be controlled by a classic remote control with a block of 10. Thanks to the double tuner, these can also be used to program recordings that are stored parallel to the current picture on an external mass storage device.

The two Sony models KD-55A1 and KD-65A1 are outstanding OLED televisions, which can reach the competition of LG in any case the water. The designers and engineers have also done a lot of work and created optically exceptional TV sets, which also offer an interesting and sound sound concept. Here it is worth taking a closer look!