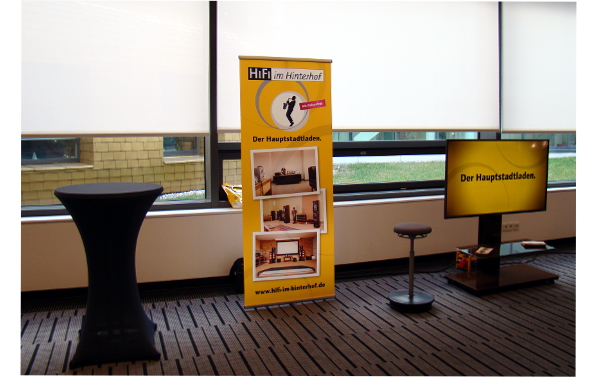 As previously announced, the High End on Tour was hosted last weekend in Berlin at Andel's Hotel. We were there with a minimalistic though convenient stall and also had plenty of time to have a look around.

Overall, the mood at the hotel at the High End on Tour was one of contentment and definitely relaxed. This offered the attendees an experience that was in stark contrast to the hectic sensory overload of an event such as the IFA, where one has little chance to escape the awe-inspiring sensory overload. Most presenter-manufacturers received separate areas on a large area on of of two floors allocated and the doors to the individual meeting rooms remained closed during the presentations. In a central hall on the ground floor a number of exhibitors were gathered along with either headphones or without sonication. There are also a few attending representatives from local dealerships. Since neither visitors nor the representatives of the exhibiting companies distinguished themselves, rather all just took part in vociferous discussions, dominated by and large a comfortable silence the entire scene of the action so you could concentrate on the essentials: Hearing of the presented systems and components. As was to be expected really not much different, it was possible to pre-launched systems, the full range of subjective taste scale of “I want to get out here quickly” to “Pretty impressive” cover. It was carried to the one used in the context of such presentations musical spectrum. In the truest sense of the word carved out the socks ultimately gave us none of the demonstrations, may easily counteracted the cozy atmosphere too exuberant outbursts of emotion. We were able to record one or the other nice conversation for us so we punctually at 16 clock satisfied overall and remains deeply relaxed mined our small but nice booth on Sunday, and we set out for back towards Kreuzberg.