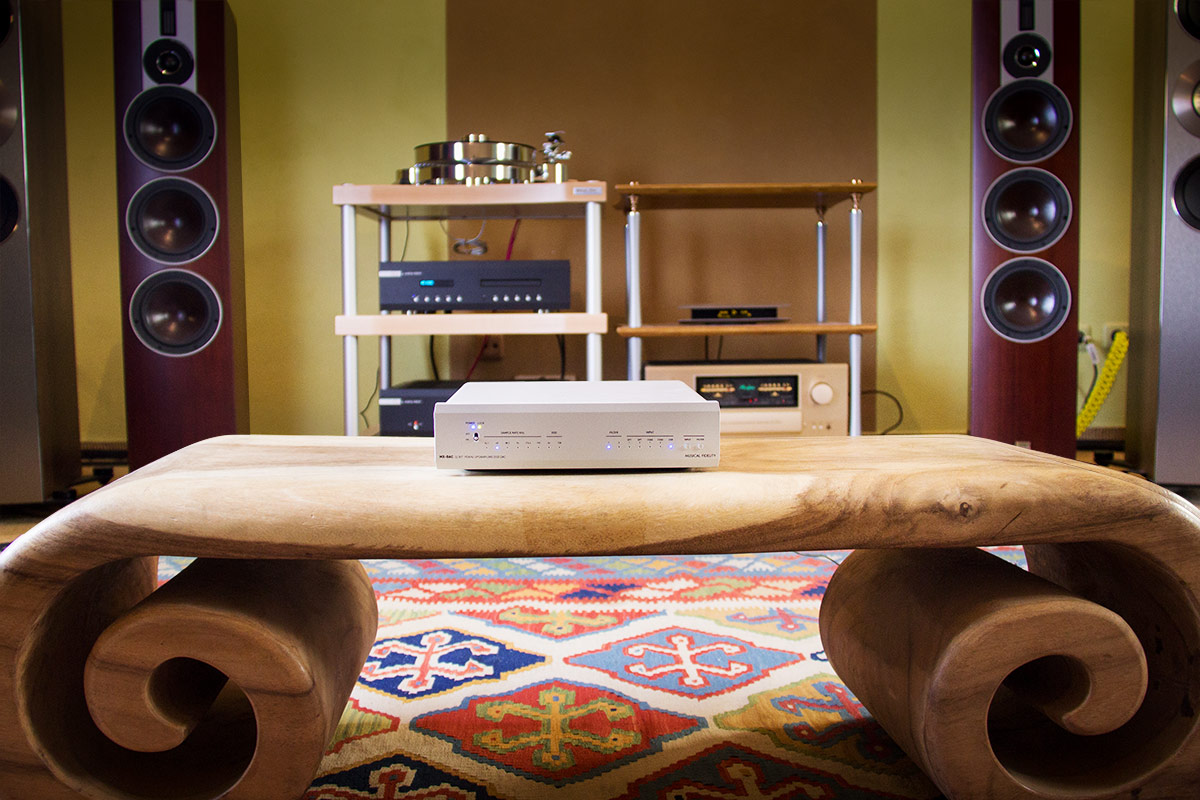 26. November 2015
This year's High End exhibition in Munich, the featured digital-analog converter Musical Fidelity DAC MX suceeded once again to win the benevolent attention of experts. We also liked the new digital specialist from Great Britain a lot, so we decided to introduce the Musical Fidelity MX-DAC here in even closer detail.

The history of Musical Fidelity we have already recapitulated in a little more detail, so let’s restrict ourselves to the essentials: In the 1982 by Michael Anderson in Middlesex from the baptism upscale business is not just about one of the established names in the HiFi world, but that it may be said with good reason after 33 years, now also a producer with tradition. Part of this tradition is to recognize and take up has always been relevant developments – not in vain put Musical Fidelity as one of the first hi-forging digital to analog converter ago – and at the same time to operate in terms of price comprehensible dimensions; two qualities which are also reflected in the new MX–DAC.

On the very first glance, the MX–DAC initially does not seem to stand out from its congeners, but reveals itself upon closer inspection, both in comparison to all other Musical Fidelity converters as well as the majority of the D / A converter in total a significant difference, which be reduced to three letters: DSD. In a nutshell is it doing to an alternative, digital encoding method that is different from the usual PCM coding, already at Sony’s Super Audio CD (SACD) was used and is currently in the course of making available digital high-resolution formats for the end customer a veritable comeback. This latest development contributes Musical Fidelity now with the MX–DAC bill so can not only PCM–based formats to play up to a resolution of 192 KHz / 24 bit, but also DSD streams in single-rate (DSD 64) or Double–rate (DSD 128) can be fed. To this end, Musical Fidelity has the MX–DAC total of five digital inputs donated. In addition to two coaxial S / PDIF jacks (up to 192 kHz / 24-bit) are two optical TOSLINK interfaces (up to 192 kHz / 24-bit) as well as an asynchronous USB input (192 kHz / 24 bit, DSD 64/128) available , On the output side, the device delivers naturally analog signals that can be output either via the balanced stereo output in XLR format or unbalanced stereo output with RCA connectors. All connections are located on the rear panel and act solidly processed, also providing the unerring presence or repositioning of the front, thanks to the straightforward connection field and the sufficient distance between the bushes, hardly a problem. The completely made of aluminum housing radiates longevity and also scores with its elegant design. The front panel dispenses with the now almost obligatory digital display, instead giving labeled Status LEDs in powerful bright blue at any time information about the currently used input, the type and sampling frequency of the applied signal and the currently active digital filter. Which there are two different versions to choose from, and both color the sound subtle in slightly different ways. Here decides the personal taste. The button and the small on / off switch blend both visually and qualitatively seamlessly into the overall picture and four generously sized rubber feet ensure stability. The MX–DAC performs an inconspicuous job in the best sense. Sovereign recognized the different formats and resolutions, which will then be brought from the amplifier stage clear and punchy on the air. This applies both for playback of DSD files – this is generally a bit “analogeres” Feeling at a slightly lower “audibility” attests, what can be reconstructed entirely in the case of the MX–DAC – as encoded for PCM material with precision and transparency will be presented without the musicality falls by the wayside. The reproduction of all frequency ranges is done perfectly, also the beautiful drawing of stage and space when playing is to be mentioned positively.

Musical Fidelity’s latest coup in things digital to analog conversion the first time offers the DSD support currently popular and does a good job in this domain as well as in the conversion of common PCM data. Equipment and processing can be virtually nothing to be desired and beyond it, the designers have understood very stylish to “pack” the qualities of the MX–DAC. As all this were not enough arguments, running with us continues to be the Musical Fidelity Cash-Back Promotion

The Dali Opticon Series in Our Showrooms