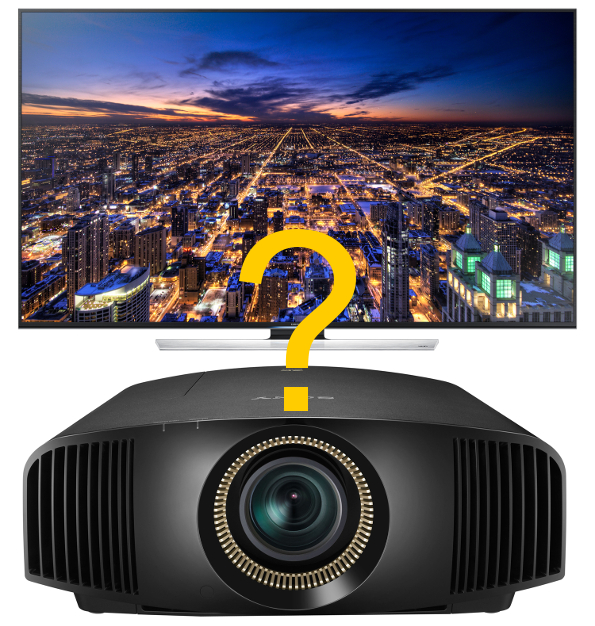 Every now and then you still come across CRT televisions: bulky and often small in size, they've quickly dropped by the way side. For some it may even make it to a second or third repair service, for almost all the others they end up as junk on the street corner, serving out the last of their existence. Their modern TV successors have been on a long race for first prize in functionality, design and screen size. Fueling this trend of home cinema ambitions is the horde of customers, who are watching sporting events, games, and evening blockbusters, whilst wanting to get the perfect viewing experience across the genres. While this promise so far was apparently solved with a projector screen now in the equation, one may still now weigh up the options: Big Screen TV or Projector?

To get stuck into the topic, here’s an overview of the current technologies for imaging devices in both categories. In the second part, foregrounded are considerations regarding the equipment and user behaviour because both of these aspects are possibly end up much more decisive than the original desire for a large screen size. Finally, we conclude with recommendations both variants.

Current Smart TVs are mostly equipped with so-called LED screens. The abbreviation LED stands for “light-emitting diode” which is misleading at first, because it refers strictly to liquid crystal displays however the “liquid crystal display” (LCD) term still applies, but arises only on a second glance. The crystals act as a filter and do not emit light themselves, so that the panel must therefore also be illuminated. During this purpose until a few years ago cold cathode tubes were installed to take over performing this task now, now as LEDs. To draw attention to these technological changes, the reference has cross-vendor enforced the term LED lighting, and for good reason. It allows a more compact design and ensures increased energy efficiency with longer service life and higher reliability. This LED screens are particularly ideal for large displays as well as very high resolutions. It actually offers a variety of models that can offer a new take on old material in Ultra-HD playback with a resolution of 4K, while lower resolution content be adjusted accordingly via upscaling. Important at this point is the argument of energy efficiency, which points towards the market place of the plasma TV. As an alternative technology they play virtually no role, since large panels with many pixels would drive the energy consumption disproportionately higher. Projector technological diversity is much greater. Let’s focus on the most important solutions for home users and start with the DLP projectors. This projection technique – the acronym stands for “Digital Light Processing” – consists of three key elements: projector lamp, colour wheel and Digital Micromirror Device (DMD). Wherein the digital micromirror device is an integrated circuit on the surface of a large amount of very small mirror is mounted. Each of these represents a mirror image point, and is tiltable by an electrostatic pulse. There are in fact two multivibrators switching between where the light is reflected or not reflected. The regulation of the brightness of individual pixels resulting from variations in the duration of the tilt intervals. Rare switchings lead to greater brightness, fast switching up to 5000 times per second will give correspondingly darker pixels.

Before it impinges on the mirror, the light passes through a rapidly rotating color wheel having at least three sections corresponding to the basic colors. For better color representation are the wheel now often added more color segments, their colors and sizes vary from manufacturer to manufacturer. The finished image impression ultimately results from the rotation speed of the wheel, the tilt of the mirror as well as the inertia of the human eye. In addition to the variant with only a digital micromirror device, there are models with three chips, the total bit are then constructed differently. Due to the high price rather intended for professional use, it’s mentioned here only as a supplement.

Quite common in turn is also in projectors, the use of LC displays, is the third of the displays often at work. If this is the case, the models are also advertised in accordance with the abbreviation “3LCD”. Again, the light is produced by a projector lamp and then split using dichroic mirrors reflecting only certain color components in the three primary colors. In the next step, the light components are filtered by a respective one of the three liquid crystal displays. The final image impression again using a dichroic mirror in the form of a prism that assembles the filtered color components again. In contrast to the DLP technology, the colors occur here simultaneously and not sequentially.

This also applies to the last method presented here, which simply put is a mixture of the two previous. The LCoS technology (Liquid Crystal on Silicon) is often found in expensive devices, based on their Ultra-HD capable models currently prevalent. LCoS projectors are also provided with LCDs, but they are similar to the mirror of a DMD, when running on a micro display chip. As described above, the light is also here first broken down into its basic colors and then hits each one LCoS chip. Again, the LC microdisplays act as a filter and a reflective electrode layer under each of the LCDs throws back the light after the finished image merges through a dichroic prism. When marketing the manufacturers use different name. Keep optionally for terms such as SXRD, D-ILA DLA or out. A lot of elements create a cinematic atmosphere

Television or Projector – who wants what?

Unlike which has developed a technology currently established mainly in televisions, bringing the three presented types of projectors each specific advantages and problems. However, this naming standard rate is only of limited use, because the assessment depending on the manufacturer, instrument generation, budget and purpose necessarily be the same. Here you should previously be well informed and, where appropriate, try different alternatives. We want to take this opportunity merely hold that the choice of the right projector is not made easier by this additional level while competitive TV sets are executed in a rule than LCD / LED combination, so it is in this respect not much to consider.

Also in other respects it seems to be at most televisions to the simpler and the more universally usable option. Given is not just dependant on the screen size, the image quality is very good. Apart from situations with extreme sunlight that applies for day and night time alike. The projector technology for the private market has done great strides in this regard, but the light from the projector must first get to the screen to be reflected from there to the eye. This additional path is mainly under daylight conditions represents a physical challenge, the TV does not need to ask. On the other hand you have to be stated, of course: When “good” light-performance projectors can now produce excellent images. Then is still enough space available, there is no TV that can keep up with the image dimensions to be achieved.

However, as already indicated, Ultra-HD projectors are unfortunately still very expensive. If this feature is desired, but price/performance considerations still play a role, one should keep in mind that it is often not done with the purchase of a projector alone. We outline the maintenance cost of the device itself. Depending on the intensity of use, from time to time replacing the bulb due, which can devour several hundred euros depending on the model used. Furthermore, one should not give up a canvas, the course also proposes additional impact. The acquisition is recommended, since the bare wall and other workarounds usually swallow too much light and reduce the dearly bought Projection unnecessary. Depending on its own claims to atmosphere, amenities and ease of use, there are other aspects to consider. If the projector is not in the middle room, an overhead suspension offers itself. However, these must first be assembled and wired at best unremarkable. Maybe it is the stated goal more passing options – Computers, Blu-ray player, satellite dish, gaming console, … – integrate to drive a surround system or build a Multiroon network. As an interface for all kinds of incoming and outgoing audio and video signals is an AV receiver then virtually indispensable and also has quality at a price.

The modern Smart TV, however, is with powerful processors and multiple connections for the implementation of such scenarios often also very well equipped without additional purchases. The tuner for the obligatory television is integrated, a variety of external storage media and playback equipment can be connected directly via USB or HDMI and connect a recording feature is also available. Via Internet, you can access apps, websites and other deals while streaming portals provide fresh film and series feed from the network. Although internal speakers deliver the sound but hardly great cinema moments, but at least present when just is desired about the night Zapping No imposing surround sound. And if they do, then there is no external AV receiver several options sound good to realize.

It’s always advisable to have a clear idea of each technological conceptions before you decide on one or the other alternative. Are current TV with a screen size of about 60, 70 or even 80 inches, if you again think back to the aforementioned tube TV, huge and impressive. If this is too little, or who has a specific application in mind, might still be a projector based solution is prefer. Maybe it can therefore be best summarized as: not for nothing that exists, the separation between “TV” and “home theater”. While the latter is a project for enthusiasts, almost infinite leeway offers and is just not for everyday, but for the special moment you get with the TV on for the all-inclusive package including a great picture, excellent features and best for everyday use. The ambitions are big here, but the separation exists just yet (still).

UKW and DAB+: The Official Rankings
Digital Music: How It Works
image