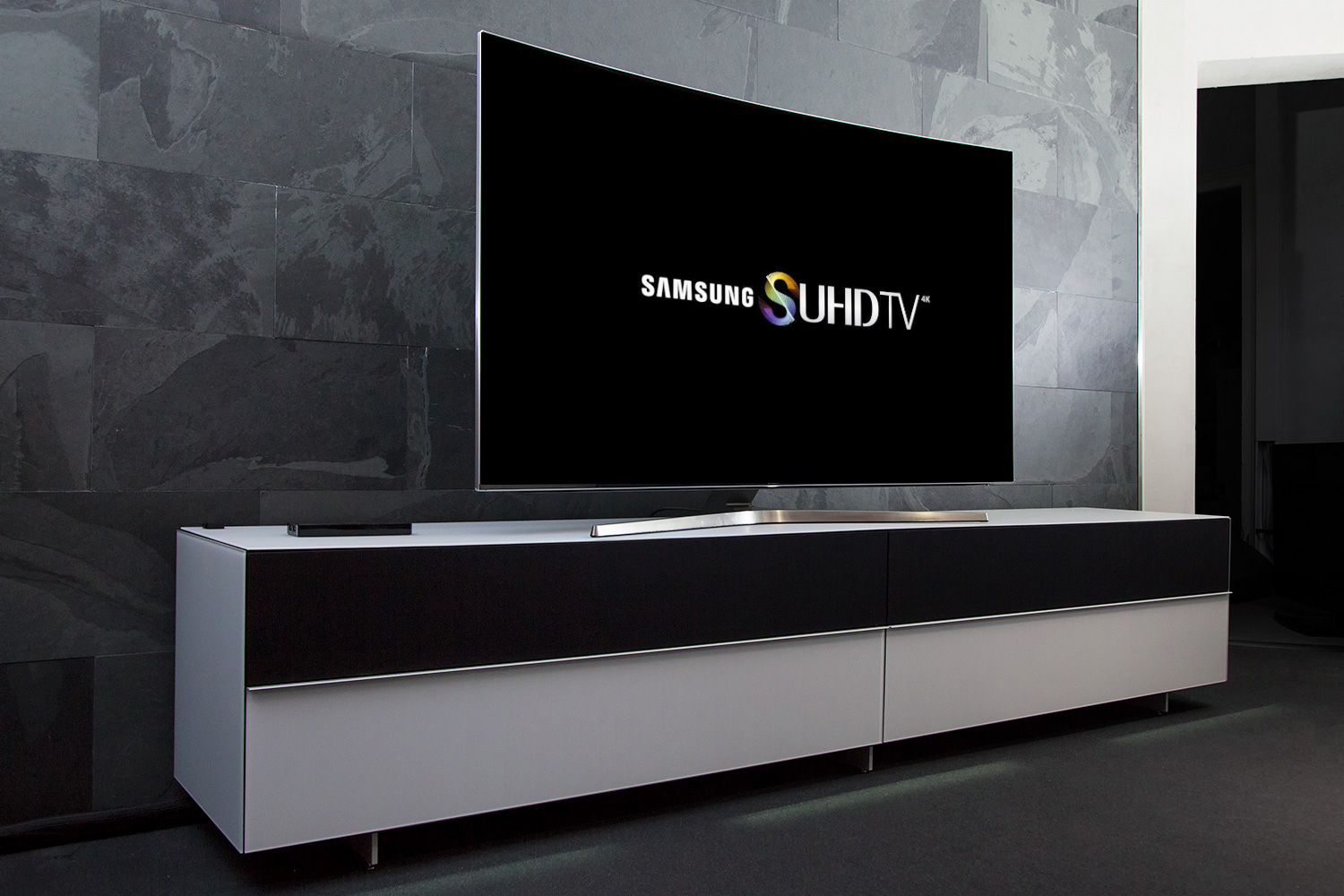 We've been waiting long enough: last week Samsung UE65KS9590 has finally arrived to our showrooms. We've taken the opportunity to do a photo shoot and give a brief overview of Samsung's top model from the 2016 SUHD series.

A certain expectations can not be dismissed out of hand when Samsung posted a new high-end model in the running for the best TV screens of the year. For some time the Koreans defend with outstanding TVs not only their reputation but also the undisputed market leader in this product segment and have demonstrated with the already available devices of the current generation, that they are able to set new standards also in terms of the new HDR technology, the Samsung UE65KS9590 now comes the special task to the bar here another notch to create and define the state of the currently possible in the house of Samsung. Here, the manufacturer continues to set the time-tested combination of LCD display and LED backlight, but used in the UE65KS9590 a luxurious full array backlight. The LEDs lining here not as usual the frame of the panel (Edge Lit), but are distributed behind the whole screen and can be controlled in small groups. Thus, the precision of the backlight is increased considerably and the simultaneous display of light and dark parts of the image succeeds much more convincing – especially in view of the now strong competition OLED from LG is a not unimportant factor. Further comes the UE65KS9590 again proven Quantum Dot Color technology for use, d. H. A layer of so-called nano-crystals ensures a more neutral white backlighting, thereby improving both the displayable brightness range and the color dynamics of the display. These two aspects are of course important for the image quality in general, but in particular ensure that the Samsung UE65KS9590 play qualifies for the Ultra HD Premium Certificate of Ultra HD Alliance and thus expressly recommends for playing HDR content. This succeeds in our first short test run with the previously available HDR gemasternten Ultra HD Blu-rays impressively well – the UE65KS9590 has extremely vibrant colors and great depth on the Full Array Backlight doing an amazing job and delivers a convincing black. But HD content or 4K material without HDR rendering must be no hiding little thanks to the potent quad-core processor that drives the SUHD remastering Engine. Both the 4K upscaling and other optimization processes work exemplary and deliver despite the limited feedstock very good results. Samsung has even refilled with the HDR + update recently released again and created another way of image optimization that is available for all signals.

But also on the exceptional image quality also raises the UE65KS9590 a number of good arguments to bear. Here would be the most obvious example, under the slogan “360 ° design” firmierende design and connection concept of the new SUHD models mentioned: On the one hand, the entire television and especially the reverse has been designed so that a free-standing position under optical aspects definitely is an option, at the same time can use the one Connect Box to be a unique feature – exuberant clutter cleverly hide, so that probably important argument is made against a free-standing largely from the world. With the new generation Samsung outsourced connecting terminal has also received a welcome update. The current version does not need a fan, and contains the obligatory four HDMI ports, two USB ports, a digital audio output in TOSLINK format as well as the connections of the integrated twin tuner. On television itself contains only the socket for the power cord, the CI + slot, another USB port and the Ethernet jack to possibly produce a wired Internet connection. On interfaces for transmitting analog video and audio signals omitted Samsung now fully, but other than that leaves the equipment a complete impression. Finally, we want to dedicate ourselves nor the operation of the Samsung UE65KS9590. After it in recent years, many manufacturers usually had two remotes – a classic version and a modern smart remote – shaped frame, Samsung has now taken the step and gives the latter final preference. Unlike some less edifying experience with this new remote control type in the past, the implementation acts in this case positively and it can be navigated quite fluid through the surface of the operating system. Here Samsung is of course still an in-house system Tizen, its structure and now good speed contributes its part to the positive user experience. Popular features such as access to the major streaming provider and the ability to connect an external hard disk record of course back on board. Who is not the way, in spite of all the smart Ferbedienung warm, was reassured at this point: The old remote control still works with the current models and we put our hand to wish happy with such a copy at.

The Samsung UE65KS9590 masters his task brilliantly and is sovereign to the top of the current 2016 SUHD TVs. The picture quality is beyond doubt and the current technology can really flex its muscles in particular in combination with the new HDR-material. The decision only you can certainly criticize settle a smart remote, on the other hand leaves this in conjunction with the latest version of Tizen a really good impression and use the classic Samsung remote control is still possible. Other improvements such as fanless One Connect box round off the already excellent package.

And here is the link to our unboxing video:

New in Our Showrooms: The Samsung UE65KS9590
video