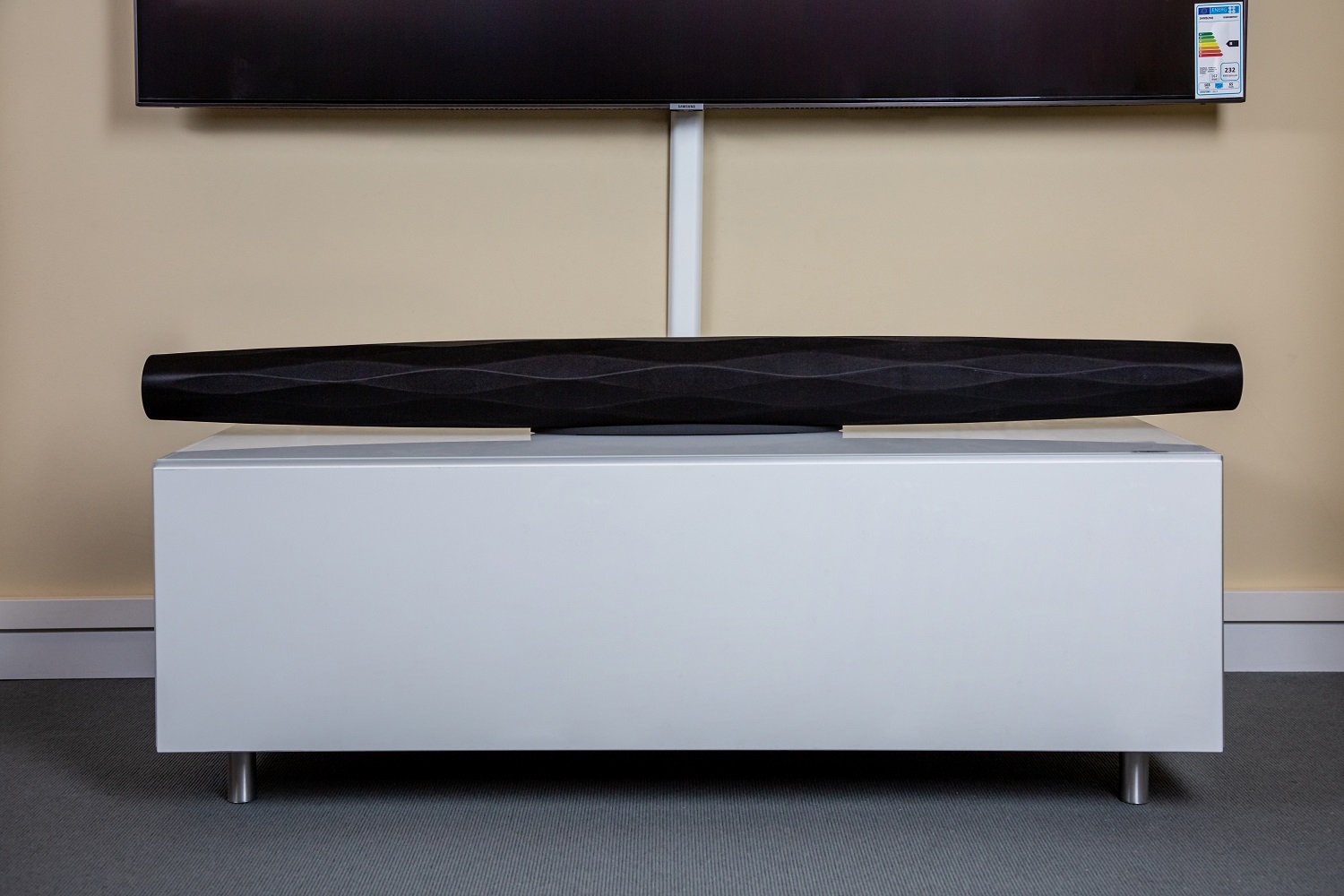 The latest design masterpiece from Bowers & Wilkins is called Formation Bar and is part of the new Formation series, whose individual components are ideally matched to each other. The series consists of a subwoofer and audio hub, a music system, speakers and a multiroom sound bar. This promises great sound when watching television and listening to music and is therefore the focus of the following.

At first glance, the design of the Formation Bar is striking. With its fabric covering in a rhombic pattern, it stands out significantly from other sound bars. Visually, it creates the impression of a noble work of art that can be seen in any living room.

The subject of connections is quickly solved with the Formation Bar, as it only has an optical input (Toslink). Any instability that HDMI can bring with it is avoided. Via the input, the sound bar can be connected to the television, which then plays back at the preset volume. Conversely, this means that the volume must be controlled via the sound bar. The Formation Bar itself does not have a remote control, but can learn to control the volume using the remote control of the television, as already known from other manufacturers. And in the last instance the volume can of course be easily adjusted via the app.
The sound bar is connected to the home network with the network cable or via WLAN. But, of course, wireless streaming is now at the forefront of music listening. Thanks to the integration of Apple AirPlay, Apple users* find it particularly easy to operate the Formation Bar. But also Spotify, Roon and of course Bluetooth are integrated in the sound bar, so that there are numerous possibilities of connection.

As expected, the Formation Bar convinces in terms of sound all along the line. In total, three tweeters and six mid-bass drivers are installed in the sound bar. You can therefore look forward to excellent sound in the highs and intoxicating low tones, which makes the TV sound an absolute experience. In addition, there is a separate center channel that ensures that dialogues are clearly reproduced. And the bonus: The 3.0 speaker system can be expanded into a 5.1 surround system in combination with other formation models.
The impressive sound of course also refers to the playback of music, which can compete with modern stereo systems.

Sound or comfort? This Soundbar can do both! It is very clear that the Formation Bar not only has an impressive appearance but also has all the advantages that wireless Soundbar can offer and therefore it is an ideal addition to the home cinema. This is rounded off by the Dolby Surround and Dolby Digital sound formats – an excellent combination. And since Bowers & Wilkins has announced that they will be releasing regular updates to the soundbar and the complete formation series, there are plenty of highlights to look forward to.