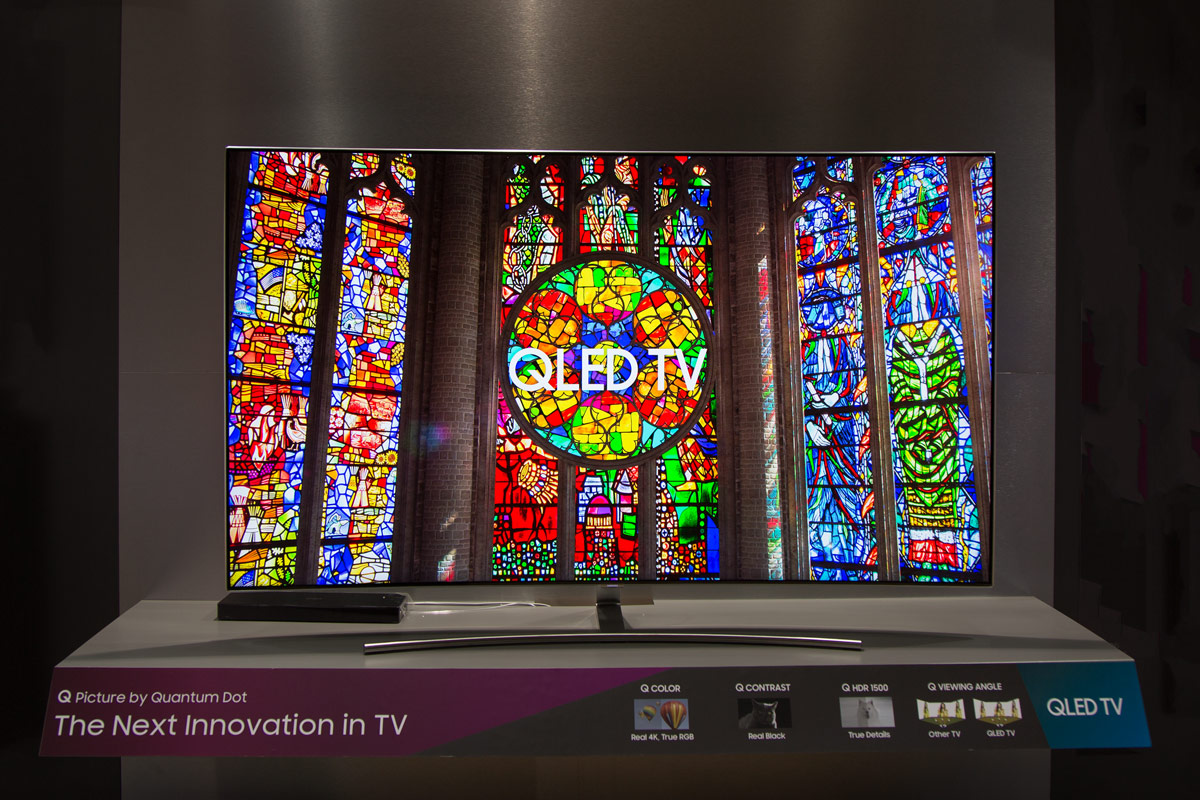 Every year, the big TV manufacturers presenting their new model series in Spring. This is of course also true for the industry mainstay Samsung, which this time the has entries in so-called QLED displays in the race for the best picture sends. After we visited the roadshow in Cologne this week, we now have a small preview of the special features of the new top models Q9F, Q8C, Q7C and Q7F.

The term QLED has been haunting the net for a while and is, of course, reminiscent of the OLED technology, which has been pushed ahead of the competition LG in recent years. While the latter is now increasingly used by other manufacturers, Samsung is still consistently dispensing with OLED displays and has instead decided to go another way: the goal is to produce displays without LED backlighting which are based on Samsung’s ‘Quantum Dots’ (hence QLED).  In this respect, it is ultimately possible to circumvent various disadvantages of the OLED technology. For example, OLED panels offer known black values, for example, but they can not keep up with current LED backlight TVs in the opposite direction with respect to the maximum brightness. However, this aspect will become more important in view of the increasing availability of HDR material in the future and QLED displays could bring the decisive advantage here – a pixel-accurate control without background lighting and at the same time significantly higher brightness potential. While this technology is still under development, the 2017 models are already benefiting from the intense research that Samsung is pursuing in this regard. This is particularly noticeable in three points. The limit of the technically feasible with regard to the potential brightness in the last year was about 1000 Nit – Samsung explicitly applied this with the abbreviation HDR1000. The Q9F is capable of producing up to 2000 nitons (Q HDR 2000), Q8C, Q7C and Q7F reach 1500 nitr (Q HDR 1500). Since the image quality tends to lose depth and force, particularly in the case of high brightness levels, care has also been taken to optimize the chromaticity especially in such image sequences. At the same time, all QLED models cover the DCI-P3 color space almost 100% – also a significant improvement over the previous year.

Also the design of the new Samsung TV has been updated, Samsung continues to offer a mixed range of Curved (Q8C, Q7C) and flat displays (Q9F, Q7F). The frame as well as the table base are made of metal in the 2017 version and leave a correspondingly valuable impression. Here the designers have done all the work. The same is true also for the efforts unsightly to avoid unsightly cable and/or disappear. The connection between TV and the latest version of the One Connect Box is now made via a thin, thin optical cable, which can be routed through the inside of the foot together with the power cable. As an alternative to the standard version, Samsung offers on the one hand the noble “Gravity” round foot, which allows the display to be tilted up to 35 °, on the other hand, the “Studio Stand” allows a free installation in the room without the TV on a piece of furniture Should be placed. In addition, the optional “No Gap” wall mount was conceived, which reduces the distance between wall and TV to an absolute minimum. As in the past year, a conventional remote control is no longer included with Samsung, but the compact Smart Remote is included with the QLED TVs. The housing of the current version is matched to the TV design made of metal and is therefore very comfortable in the hand. The operation also works well in practice: The Smart Hub software has been optimized and can be operated quickly, if desired via voice input.

Finally, we want to lose a few words about the One Connect Box. This is equipped with a twin tuner, thus receiving two DVB-T2, satellite or cable signals in parallel. In addition, there are sufficient connections for external devices with four HDMI and three USB interfaces, as well as an optical audio output and an Ethernet jack. Due to the optical cable, which connects the TV and One Connect Box, the latter now has its own network connection.

The new Samsung QLED TVs Q9F, Q8C, Q7C and Q7F leave a consistently positive impression. Many successful detail improvements from the picture quality through the design to the elegant cable management will undoubtedly ensure that Samsung’s top-class TV will again be very popular this year. We expect the first devices to be available in the middle of March.