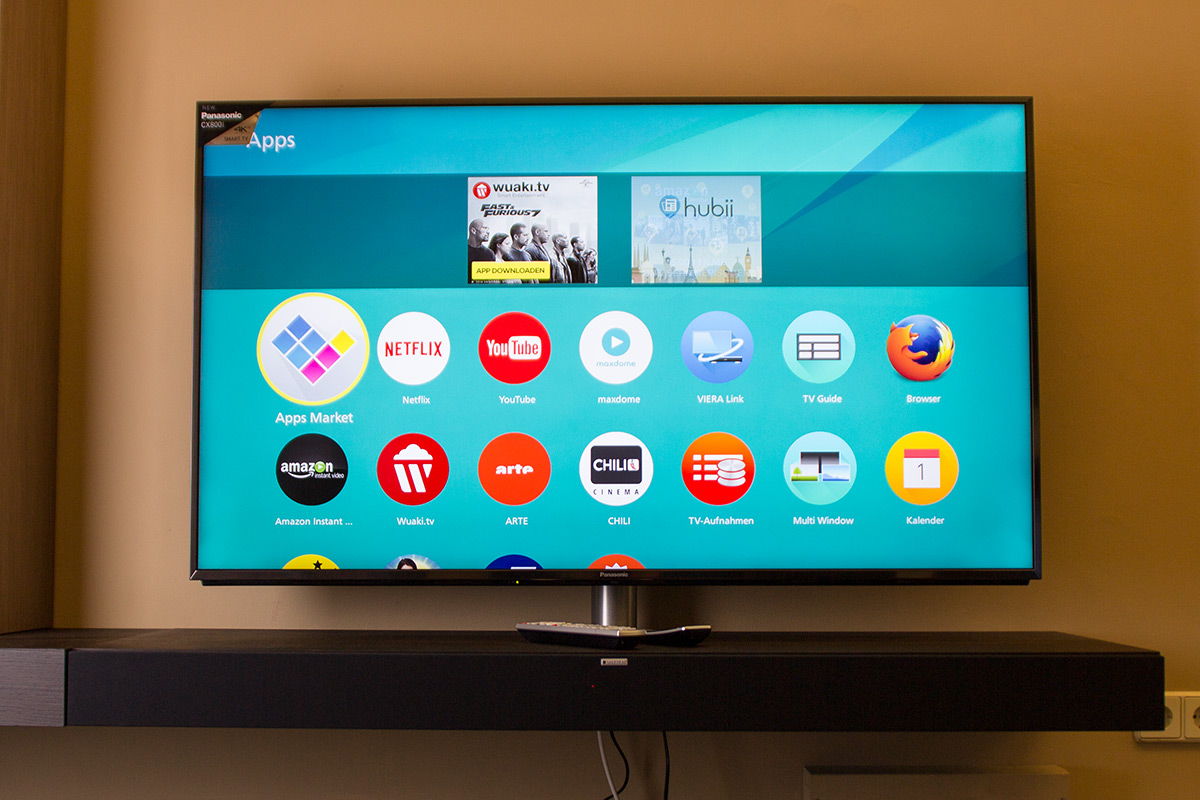 Having already have announced the availability of several new TV models of the major manufacturers Samsung, LG, Sony and Panasonic in recent months, now the top class series of Panasonic in Curved- (CRW854) or Flat design are (CXW804) in the starting blocks. Now the 55" model of the flat variant, the Panasonic TX-55CXW804 is in stock and we are able to test out its new performance. Here we take this opportunity to briefly introduce the new devices.

Already in these first and on the most important TV market discipline understands Panasonic surnamed Series – Reference – cater. The 4K Studiomaster image processor conjures up in conjunction with the other key technologies – Local Dimming Pro for rich blacks and subtle chiaroscuro transitions, Studio Master Colour for natural color reproduction, Dynamic Range Remaster for optimizing very bright parts of the image and the luminous Super Bright Panel – extremely harmonious and positive images on the screen. The colours are saturated, but act no exaggeration, the sharpness is precise to act without oversubscribed and the juxtaposition of light and dark parts of the image works at the highest level. If required, also can make, ranging from six general picture modes to comprehensive video equalizer diverse settings. The HDR support currently talk much (High Dynamic Range) is not given at the factory, but is later by a firmware update submitted werden.neuen appliances briefly introduce. Another important point is the upscaling of such content which are not included natively in 4K resolution. This property is not losing too much about the forthcoming introduction of the Ultra HD Blu-ray also important – think of the current standard in the broadcast of the normal TV channel or an existing movie collection. Our demonstration masters this task with flying colors and can also be pictures in 1080p or 720p look very good. Also convincing is the 3D playback, which in recent months has been, however, a rather less hot topic. So it is hardly surprising that the required active shutter glasses included with neither the CXW804 still in CRW854 series.

The first-class image quality particularly the advancements of the Firefox OS-based system and the “Panasonic TV Remote 2” app for iOS and Android are very welcome. The latter replaces now – assuming a compatible mobile device – the supplied remote controls (touch and classic version) perfectly and also offers some exclusive features. Falls into this category, for example “Swipe and Share,” which allows with simple swiping media content and even accessed websites from the mobile device to the TV and in the reverse direction to transfer. Also notable is the ability to configure all settings of the aforementioned video equalizer directly from within the app (Smart Calibration) and save different settings if required.

The operating system Firefox OS presents itself tidy and well structured. The minimalist home screen includes the first three categories Live TV, apps and devices, but can at any time to other elements, such as favorite channels or apps, are complemented. The navigation is straightforward thanks to the menu depth and the good response to control commands nimble of hand, so that the new models a good impression briefly introduce in this area. The same applies to the various connection options:three HDMI inputs on the state of the art (4K @ 60 / 50p, HDCP 2.2) accept digital audio and video signals, in addition to signals from analog source (SCART, Composite / Component) can feed without additional adapters. On the output side, the series CXW804 and CRW854 feature a TOSLINK optical interface and a headphone socket in 3.5mm jack format. A network connection is established either via Ethernet cable or via the integrated WLAN module, further allow three USB ports (1x USB 3.0, 2x USB 2.0) and a SD card reader to access a variety of external storage media. Last but not least are the three terminals (DVB-S2, DVB-C and DVB-T2) and the two CI + slots (Common Interface) secure sign that fitted well in the current generation of typical for Panasonic Triple-Twin-Tuner has been. This opens up flexible usage scenarios of the parallel recording and playback of different programs up to the reception of the two tuner signals on a smartphone or tablet with the “Panasonic TV Remote 2” app. A unique selling point over the competition is still supporting the SAT> IP technology based on the widespread DLNA protocol that allows the transfer of the incoming satellite signal to a compatible client such as SAT> IP-enabled mobile devices, compatible set-top boxes , other Panasonic TV sets, computers, etc. – enables more than the in-house network. With the two model series CXW804 and CRW854 it Panasonic succeeds not only in the major unquestionably aspect of image quality ostentatious. The integrated tuner in conjunction with the network streaming capabilities, the app model control and the clear Firefox system result in a harmonious overall picture, so you can consider this product update as successful in its entirety. If the basic search parameters – screen size, price range, etc. – agree, it is definitely worthwhile to consider the new Panasonic series.

Headphones – Advantages and Principles of Construction