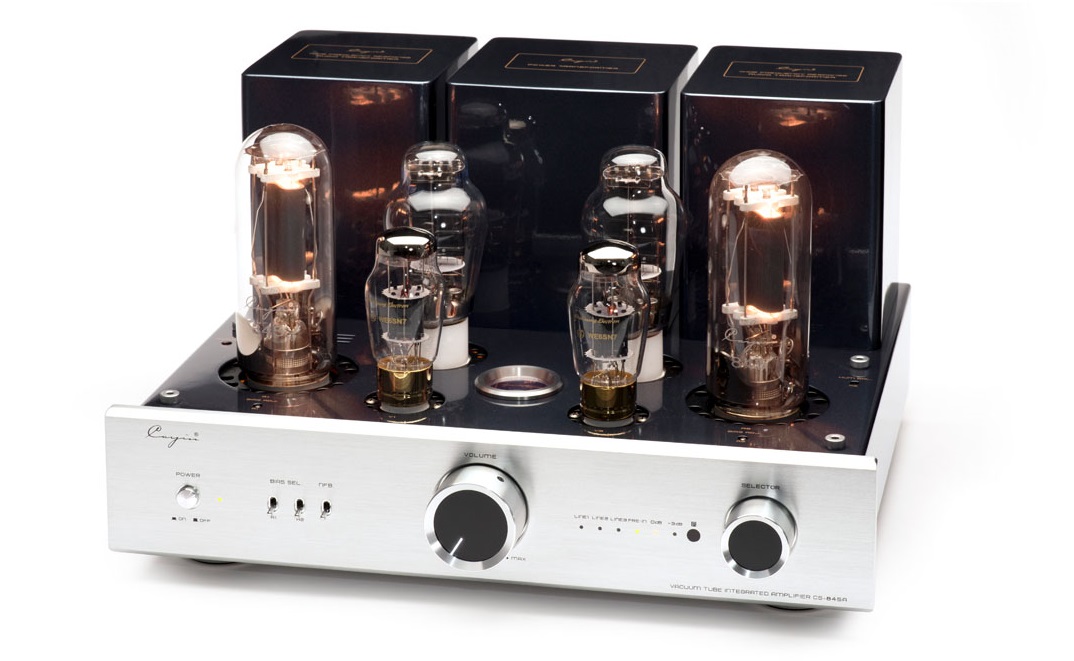 14. March 2018
Although some people are a bit shy about the use of tubes, they have already moved into music rooms far and wide. Often thanks to the German audio company Cayin Audio Distribution GmbH, which is known for its distinctive tube amplifiers. They are not just visually striking, they also impress on the tonal level. This is exemplified in the CS-845A.

The fact that the CS-845A is an elaborately designed integrated amplifier can be recognized at first glance. The analogous charm of the model is evident even in its manufacture because the thick silver-plated signal cables were freely wired by hand.

At around 37 kilos, the CS is a true heavyweight in the hi-fi class. This is mainly due to its generously dimensioned toroidal transformer with solid iron core, which reduces the spread of the three transformers. Those tower in the back of the case while the tubes are in front of them. The voltage gain is implemented by the WE6SN7, the 300B work as a driver tube. They drive the eponymous final-stage pistons 845, which are about 15 cm up and designed for single-ended operation. The combination of the tubes ensures a broadband reproduction. The A at the end of the name comes from the fact that the amplifier is running in Class A mode. (What brings class A, we’ve already looked at with other amplifier classes in an older article.)

In turn, there is a bias indicator between the tubes to facilitate maintenance and adjustment. It even gives feedback thanks to an integrated measuring instrument. The setting is operated via two buttons on the front of the housing – one each for the right and the left channel. Connections have three line inputs, a pre-in and a tape tap available. While pre-in leads pre-amplified signals into the final stages, the tape taps the active source.
In addition, the CS-845A has a switch with which the negative feedback can be activated in two different degrees. The individual sound tuning can be freely selected between 0 dB NFB and -3 dB NFB. Of course, this sounds a bit different depending on the connected speaker. The output, in turn, gives 24 watts per channel to the gilded speaker terminals.

All the functions of the amplifier can be controlled not only on the device itself but also with the associated infrared remote control. This is a pretty great innovation and provides a high level of comfort in the hi-fidelity pleasure. The volume is controlled by a high-quality, encapsulated Alps potentiometer with motor drive. The high-end amplifier not only has an open look, but also an open, clear, mature sound. Above all, space is presented in a considerable and tangible way.

Although it is not an all-rounder, the CS-845A brings without question the certain something and therefore deserves the predicate of a special model. For example, it can also be used as a pure power amplifier via its separate preamplifier input – a truly fantastic innovation!