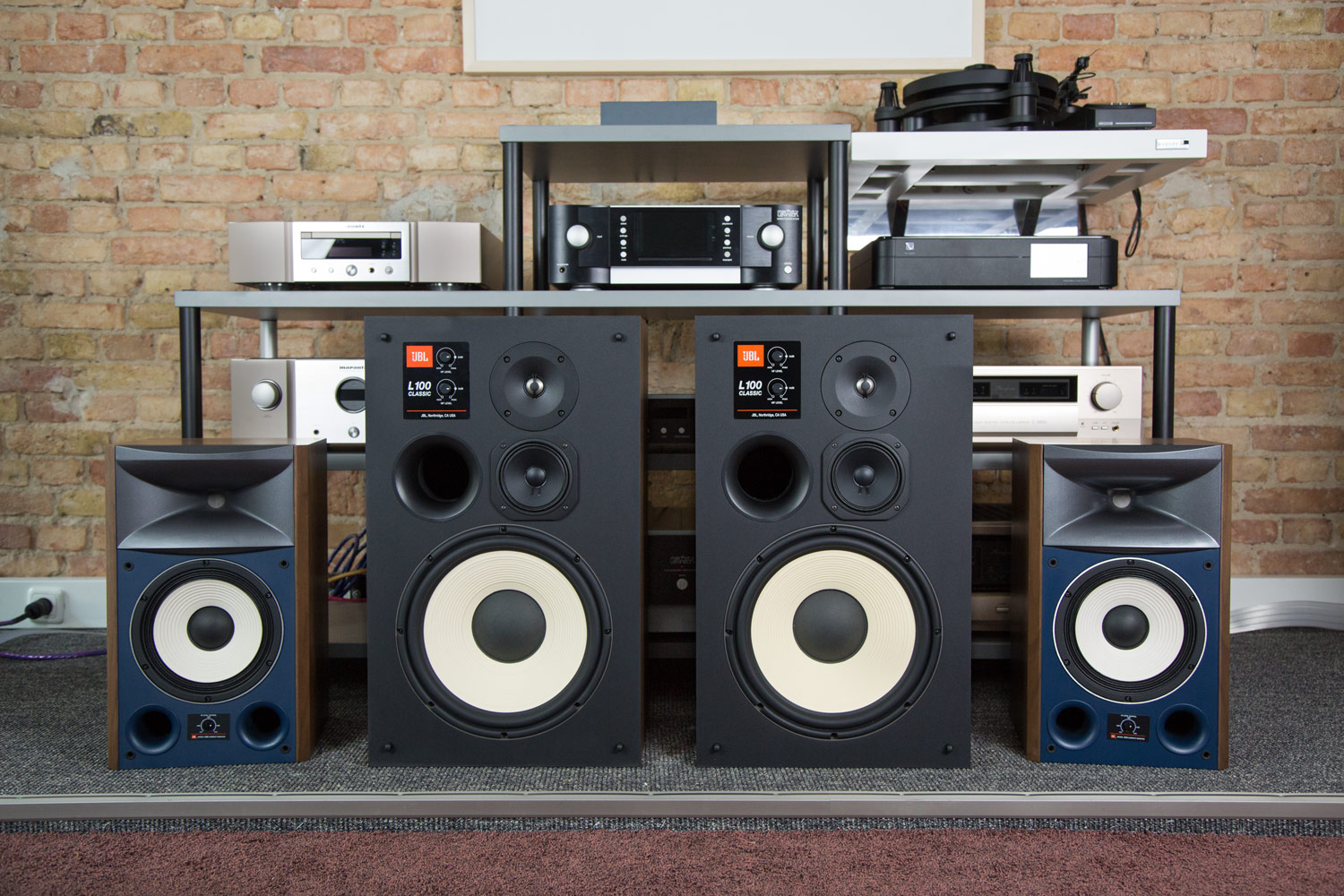 14. February 2019
Since 2017 we have had the unconventional high-end loudspeaker JBL 4367 in our range and are still enthusiastic about its performance. We're happy to demonstrate that the typical JBL sound doesn't necessarily require the refrigerator format with two smaller models, which we've just added to our demonstration: JBL L100 Classic and JBL 4306!

The L100 Classic may seem familiar to some, after all it’s the new edition of JBL’s most famous loudspeaker by far. The model, the L100, first appeared on the market in 1970 as a consumer version of the studio loudspeaker JBL 4310, quickly became a true hi-fi icon and can also be seen in Steven Steigman’s famous advertising photo for Hitachi Maxell (“Blown-away man”) from 1978.

Although the L100 Classic is basically based on the concept of its famous predecessor, all elements have of course been updated to the latest state of the art in order to adapt the sound characteristics to today’s standards. A newly developed 25 mm dome tweeter made of titanium is responsible for the high-frequency spectrum, which is slightly set back into the cabinet and surrounded by a flat waveguide. Just below is the 130 mm pure cellulose midrange driver, stabilized by a cast frame. The cream-white 300 mm woofer is constructed according to the same principle. 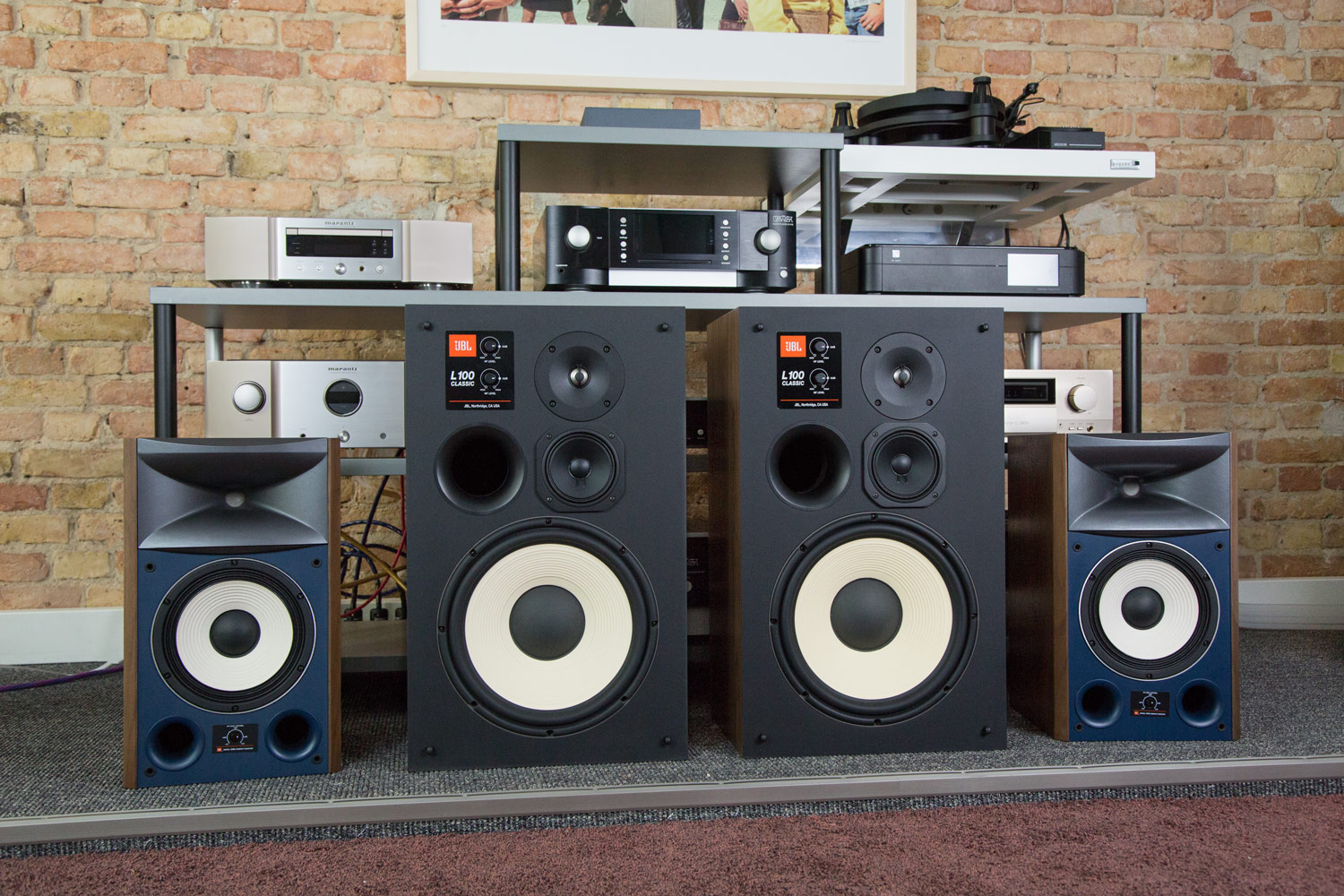 To support the low-frequency range, the L100 Classic also has a bass reflex channel at the front. The panel above with the two potentiometers allows fine adjustment of the mid and high frequencies. This is to be taken literally. Changes can probably be heard, but the tone control is rather subtle and the basic character of the loudspeaker is retained at all times. 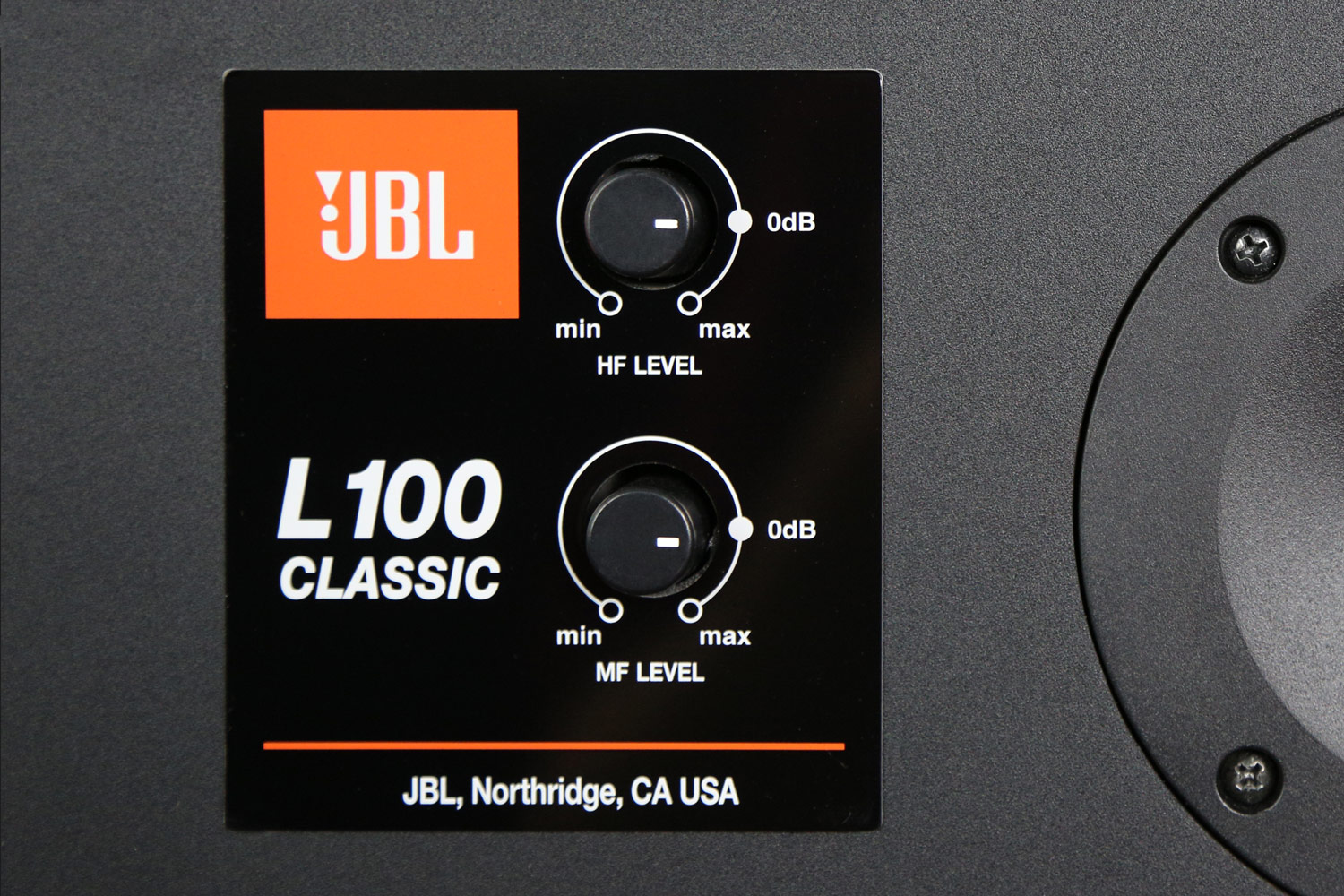 A few more remarks about the case: Here, excellent work has been done, the entire construction looks solid and the beautiful walnut veneer looks great. The black front transports the typical 70s look into the 21st century and can be covered with the stylish cover, which is available in orange (!), blue or black. It remains to be seen whether the matching stands will allow an acoustically perfect installation in any situation, but they fit perfectly into the overall picture. 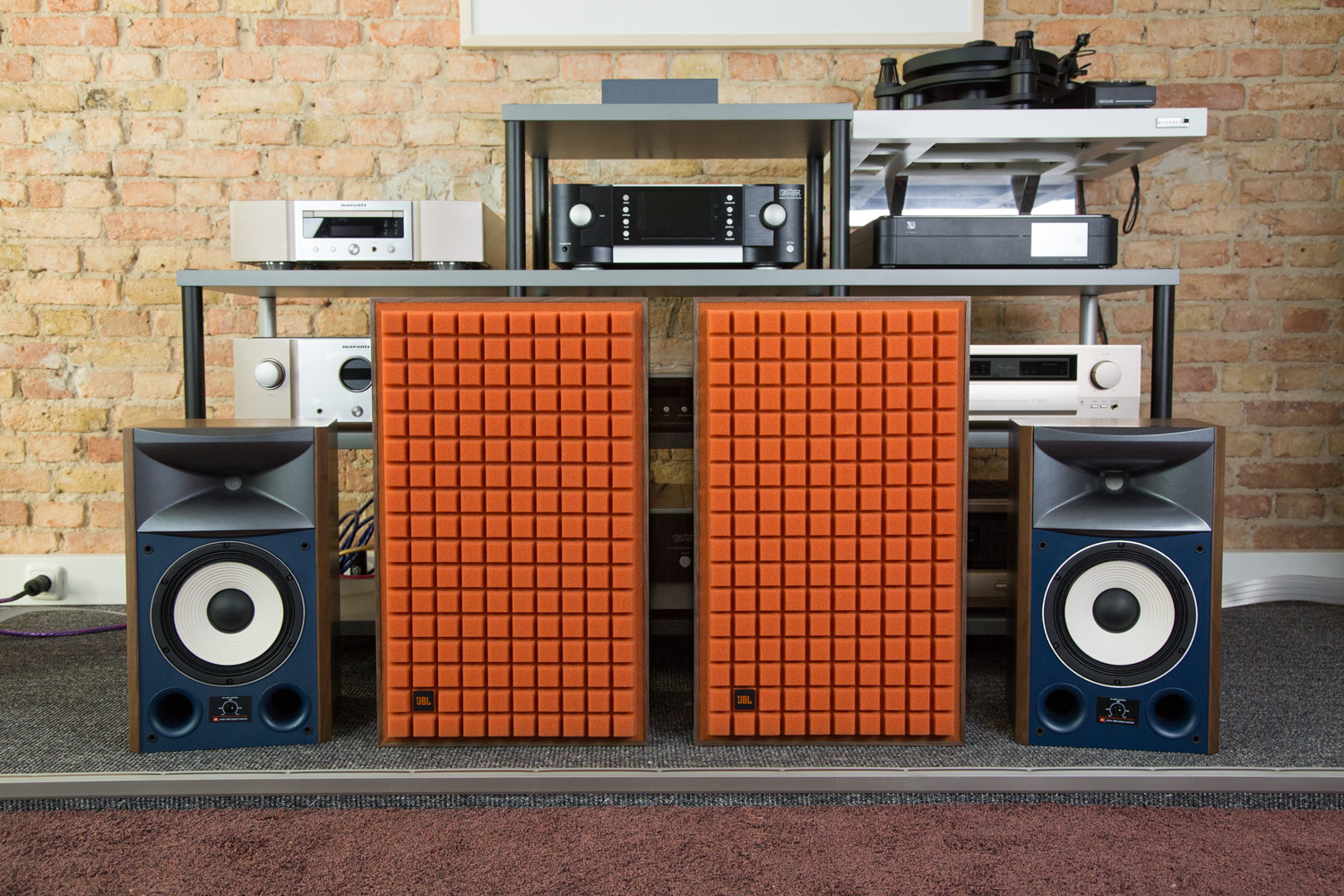 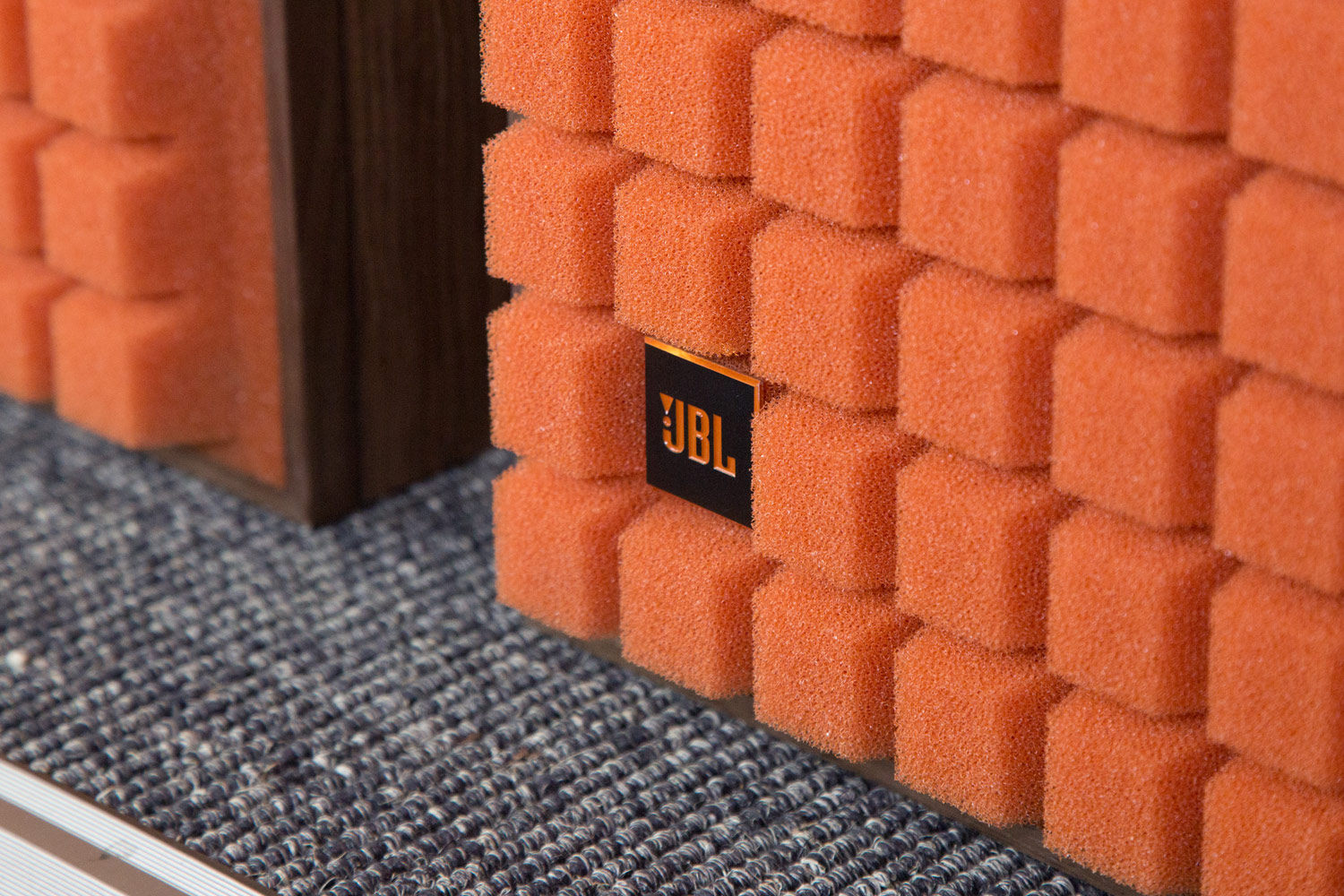 The JBL 4306 is the perfect choice if you want to be one number smaller and do not need to remember the classic L100. Like its much bigger brother, the JBL 4367, it is equipped with a tweeter/midrange horn. A 25 mm compression driver works in the centre of the horn, which – hence the name – is larger than the opening of the horn and thus achieves a high degree of efficiency and the typical horn loudspeaker sound due to the strong air compression. A 200 mm driver is used to reproduce the depth spectrum, which, like the L100 Classic, is made of cellulose. The two bass reflex channels on the front provide an additional foundation, and there is also a controller for reducing or increasing the high frequencies. The JBL 4306 has also been given a real walnut veneer, and the supplied covering is much more discreet than that of the L100 Classic. 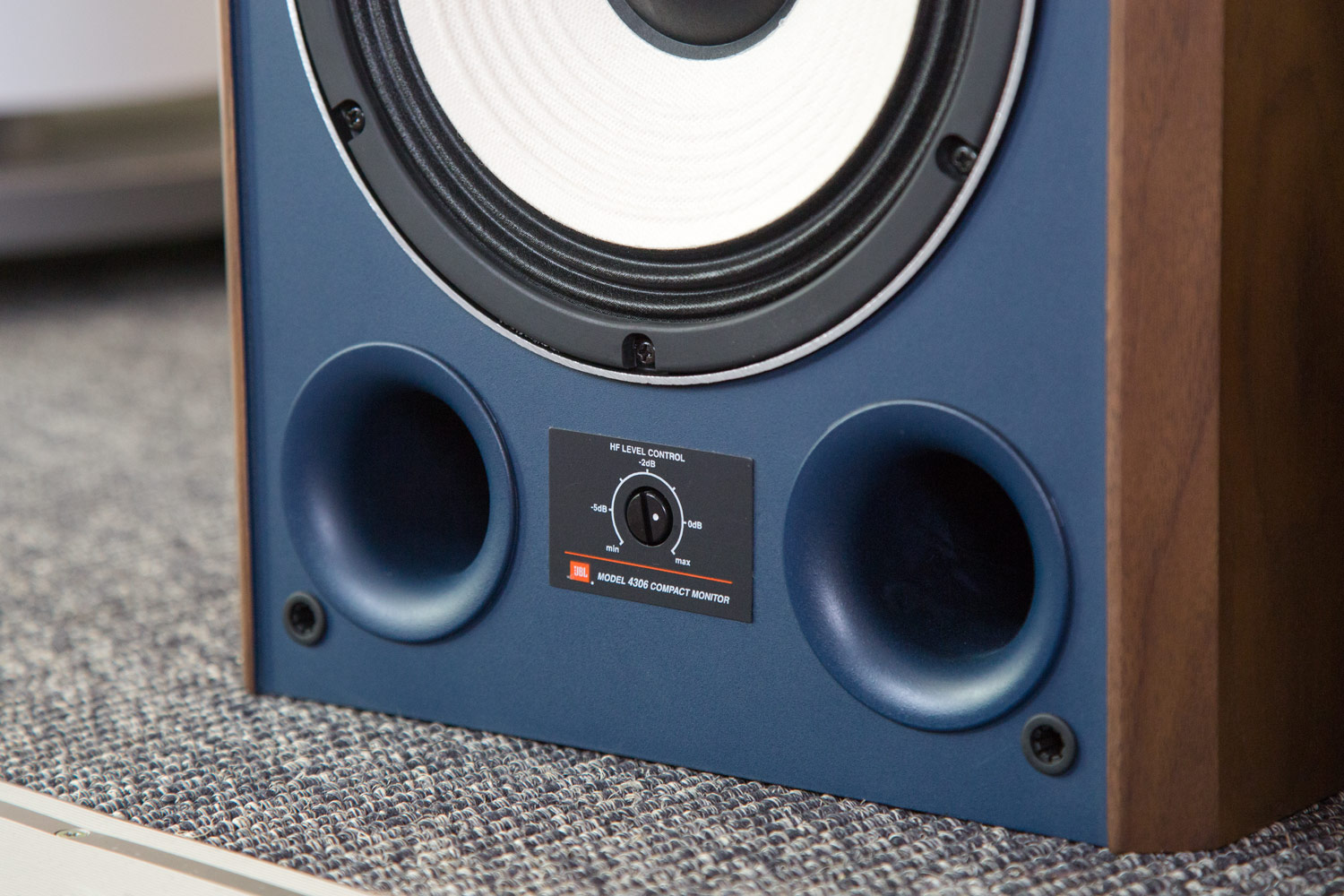 First impressions and the preliminary conclusion

If you take a seat in front of the JBL L100 Classic, you inevitably have a certain time machine effect. This loudspeaker radiates a special aura and proves once again that the optics play more than just a minor role in audiophile environments. When brought to the system, an open, clearly staggered and relaxed sound unfolds with good resolution and powerful bass. The reproduction is both focused and open at the same time, dynamics take precedence over merciless detail drawing, yet nothing is glossed over here – weaknesses in production are bluntly passed on by the L100 Classic.

The JBL 4306 is basically similar in design and the skilfully crafted horn driver ensures that there are hardly any losses, even a good deal away from the sweet spot. Here, too, we are dealing with a wonderful musical loudspeaker that has already found some enthusiastic listeners since its arrival in our demonstration studios. All in all, the JBL L100 Classic and the JBL 4306 are a real enrichment for our program and we really like them!

A Soundbar For All Tastes: The Intensive LG SK10Y