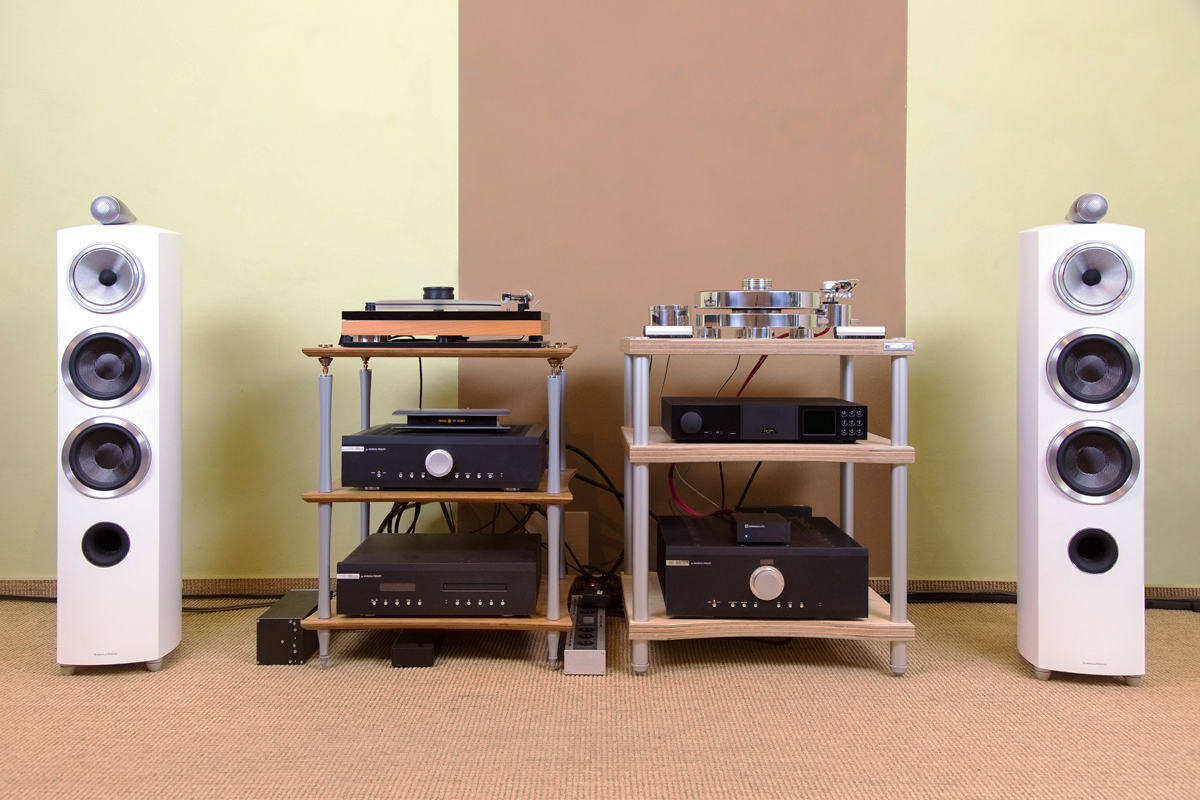 5. January 2021
Music has accompanied humankind since the beginning of time. But there was a long way between the first drummed rhythm, the introduction of universal musical notation, and the first sound recording in 1860 by Édouard-Léon Scott de Martinville's phonautograph. On this path, technology and music have always been closely intertwined and are still impossible to separate today. How has the way we consume music changed over the centuries until today?

It all starts with Thomas Alva Edison’s invention, which would later become known as the phonograph. This made it possible to record an acoustic event around 1877 and to play it back for the first time. Although Edison’s phonograph was never designed to reproduce music, let alone to be commercially successful in this respect, his invention nevertheless laid the foundation for today’s music listening. The phonograph allowed music recordings to be shared and sold for the first time. However, Emil Berliner’s patent for the gramophone and the gramophone record, filed in 1887, made the enjoyment of music accessible to a broader audience thanks to their more practical construction. While Edison’s phonograph still played music via a wax cylinder, Berliner used a flat disc instead, which only allowed the playback of sounds (in a comparatively small spectrum). The form factor also improved reproducibility. Instead of being recorded individually, Berliner’s records could be duplicated more efficiently than ever utilizing zinc plates known as matrices.

Originally made of shellac, these records dominated the market for almost 60 years until they were eventually replaced by vinyl-based long-playing records made of plastic. In 1948, physicist Peter Carl Goldmark presented his invention the “LP” (“Long Playing” Record) with a diameter of 30 cm with 33 1/3 revolutions per minute and a playing duration to the public. With a significantly longer playing time of 23 minutes per side and its higher resistance, the LP had decisive advantages over the shellac record. In 1949, the New York Radio Corporation of America (RCA) finally introduced the single with 45 revolutions per minute and a diameter of 16 cm. At that time, the designation “HiFi” was already considered a seal of quality for extraordinary sound, reserved for records with a wide frequency range, i.e. a higher reproduction accuracy. Vinyl records were initially to remain the predominant medium throughout the 20th century.

Radio For All
The first broadcast of radio transmission in 1895 consisted of Morse code. The first experiments with the transmission of spoken content and music took place as early as 1905. The radio format experienced its commercial breakthrough in the course of the twenties. By 1950, most households owned a radio set, with most content still operated by the government. In the 1960s, the first transistor radios appeared on the market. This invention opened up entirely new possibilities, as listening to music was now not only limited to one’s own four walls, but the music was now made available to a larger audience.

Tape & Cassettes: A Unique Form Of Attraction
Around 1898, the following form of audio technology was in its infancy. Physicist Valdemar Poulsen’s invention of the “telegraph” was to form the basis of the magnetic sound process. In this process, the recording and reproduction of sound events initially functioned based on magnetizable steel wires and later magnetizable paper tape as sound carriers. This tape technology, revolutionized by Fritz Pfleumer, was used in particular in dictation machines and automatic answering machines. Finally, in 1935, this process underwent a new development in the direction of music consumption in the form of the Magnetophon K1 – the world’s first tape recorder. However, at just under 100 kg, this was still somewhat heavy and unwieldy for home use. The first real home tape recorder in Europe, the KL 15 magnet phone, was introduced by AEG in 1951 and came onto the market in 1952.

The first sound cassette with a matching recorder was presented by the Dutch company Philips at the International Radio Exhibition in Berlin in 1963. Philips did not demand any license fees, which meant that this technology soon became established worldwide. Two years later, the first music cassettes appeared on the market. Apart from the Decca Portable record player, for example, cassettes made music listening genuinely mobile. Another advantage of the cassette was the fact that they could be recorded quickly by the user, allowing specially curated mixtapes to be created. The auto industry, in particular, recognized the potential and cassette players were quickly found in many car models, which only added to their success. This and their mobility were to be further increased in 1979 by the Japanese manufacturer Sony. The Walkman was born. The TPS L2 model was the first small, portable cassette recorder and came with lightweight headphones. Favourite music could now be listened to from anywhere. The cassette probably experienced its most significant popularity between 1970 and 1990. In 1983, the cassette overtook vinyl, which had previously been the best-selling medium, for the first time. But the cassette was also to experience what had happened to every medium along the way: that technology never stands still.

Digital Record?
Digital audio recordings have existed since the 1960s, but the compact disc (CD), developed in collaboration between Sony and Phillips, did not appear until 1979 and combined all digital advantages. It combined better sound quality with a smaller footprint. Thanks to the implementation of CD players by car manufacturers in cars and the first portable CD player presented in 1985, it was also suitable for mobile audio content enjoyment. Today, many manufacturers still rely on digital medium CD. We recently introduced Hegel’s Mohican (the last of its kind), but manufacturers like Cambridge Audio also carry CD players in their lineup. The audio quality of 44.100 kHz at 16 bits still represents the industry standard today. However, if this quality is not enough, SACDs are recommended, which have much more to offer sound quality. So CDs still have their place in the hi-fi spectrum.

Vinyl Is Back
In the 80s almost displaced by the cassette and the CD, the medium of records is experiencing a not negligible revival in recent years. Last year, the record overtook the CD in sales for the first time in almost 40 years. So it’s no wonder that manufacturers who had nearly fallen into oblivion are suddenly reappearing on the scene. In recent years, renowned record player manufacturers such as the Swiss company Thorens have launched technically refreshed classics with a 70s look.

Music In The Digital Age
The digital revolution changed how we listen to music and completely turned the music industry upside down after 1999, its most significant sales year. The development of Internet-enabled new ways of distributing and accessing music. This circumstance was not the least suitable fairway for data pirates. On a small scale, what had been made possible through the cassette medium could now be carried out on a large scale thanks to the Internet’s infrastructures. File-sharing sites like Napster dangerously shook up the golden age of the music industry. This circumstance was only made possible by the MP3 compression process, developed as early as 1982 by a research group at the Fraunhofer Institute. This made it possible to reduce audio data’s data size with hardly noticeable loss of quality by removing barely perceptible signal components. These low-memory data packets could now be played back using a so-called MP3 player. They were once again more portable than their Walkman or Discman predecessors, and access to music was also more comfortable than ever before thanks to Napster.
With the introduction of the iPod, Apple’s version of an MP3 player, Steve Jobs finally brought renewed balance to the industry in iTunes in 2003. Songs could now be purchased individually in digital form. Besides, iTunes also provided ways to organize music and set standards in this area.

In the following years, subscription-based models with limited music libraries gradually developed. For example, Internet radio stations such as Pandora offered their music for listening over the Internet with intervening advertising blocks. Since 2011, the Swedish streaming provider Spotify has become the most dominant force in the music business. You can think what you want about that at first, but they have permanently turned the industry upside down in every respect. Instead of purchasing our music, we pay a monthly fee or listen to the advertising. We already published an article on the topic of streaming some time ago, in which we talk about it in more detail. Besides Spotify, there are a large number of other streaming providers with alternative models.

Network Streaming
As our colleague Daniel so aptly put it, the current trend is towards the record (fixed and vinyl). Last year, we added one or the other amplifier with network function to our range and presented it in our blog. More and more manufacturers see this trend back to their independent music library and configure their devices accordingly. We expect this to become increasingly apparent this year as well, and for this reason, we are already planning an article in which we will present how to use DLNA and Co.
Access to music, especially new music, has become immensely easier in recent years. On the other hand, this also increases our responsibility as consumers towards the music creators. We should increasingly ask ourselves what the medium of music is worth to us and whether Spotify’s monopoly position might also have its downsides. Either way, it remains exciting to see where technology, and with it, the music industry, will go in the coming years. One thing remains certain: We at HiFi im Hinterhof will continue to be there for you — despite all obstacles — with advice and support.

We Bid You Adieu, Dear Norbert

Wishing You Happy Holidays & A Prosperous 2021