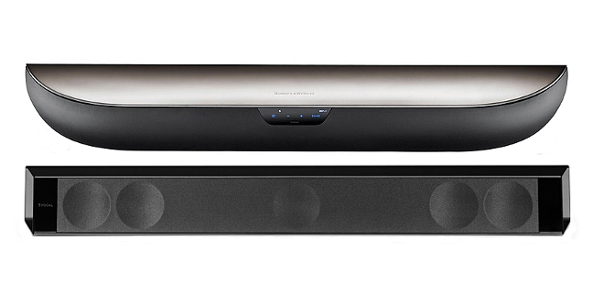 17. April 2015
To narrow down the field of compact equipment with a healthy degree of skepticism, there's no need for a degree in physics. While so much can be said for speaker design and the sound intervention from the with more sophisticated digital signal processors (DSP) but miniaturization has comes at a price. Knowing this, it seems almost megalomaniac for manufacturers to claim that their sound bars with their master both stereo and surround reproduction whilst trying to keep their regular hi-fi systems and surround systems in the picture. We're taking on the topic focusing the potential of the two top models: Bowers & Wilkins Panorama 2 and Focal dimension.

How It All Began

Compared to conventional speakers,  soundbars are still relatively young. Their beginning was marked by the launch of the ADA106 Altec Lansing in 1998, still the resoundingly named of “Voice Of The Digital Theatre”. From this sober technical description, surround-enabled directional speakers and DSP support already characteristics, the current soundbars are certainly distinguished. You can appreciate from today’s perspective as a pioneering work in this area, the innovative concept at that time remained unsuccessful and the “voice of the digital movie theater” silent now. Further tests of other manufacturers followed to establish the concept, however, sound bars were really interesting only in the late 2000s, as flat screens everywhere conquered the living room landscapes. Since then, several years have passed and now again the bulk of the speaker manufacturer with a corresponding candidate has at least in its product portfolio. It currently stand out in particular two products from a wide selection and it is hardly surprising that both developments go back to foregone HiFi professionals.

Released in 2012, the Panorama 2 instantly goes further than pure stereo reproduction here, actually hiding the suspicious-looking rounded corners with four midrange drivers which are controlled separately in accordance with available surround mix. The targeted involvement of room reflections should sound as though the sound is emitted in the first instance exclusively from the front, giving the impression of surround sound. The set-up is completed by two bass speakers that are responsible for the necessary bass foundation and the centre channel, which is equipped with two mid-range and a work based on the famous Nautilus tweeter technology. In addition, the low bass range is formed by two bass reflex enclosures, the so-called flow ports. Inspired by golfing, the surface of the two resonance channels is also dotted with small depressions which reduce the air resistance of the surface. If required, the bargain connection is an external subwoofer. Here Bowers & Wilkins PV1D offers itself as a good solution. In order to realize a successful spatial representation possible, Bowers & Wilkins is in addition to the orientation of the speakers in addition to the integrated DSP of Panorama 2, their influence on the frequency response and spatiality can be adjusted within limits to the individual listening situation. The setting of all parameters can thereby make using the finely designed touch panel, the main functions are also via the supplied infrared and the TV remote control (CEC protocol) are available. In addition to the usual suspects Stereo, Dolby Digital and DTS Dolby Pro Logic II codec is supported, decodes the surround sound information from a stereo signal. High-resolution formats like Dolby TrueHD or DTS–HD unfortunately remain on the sidelines. The integration possibilities into existing AV setup are due to their manifold connections (3x HDMI In, 1x HDMI-out, 1x analog / digital Aux input, 1x Sub–Out) to be called comfortable. While Bowers & Wilkins already able to draw on the experience gained from the development of the predecessor model at the Panorama 2, sends the French manufacturer Focal with the dimension of this year its first soundbar to the starting line. The concept differs in certain significant respects from the Panorama 2, there is still also in the dimension no less a claim to implement as stereo and surround sound at the highest level. The non-existent curves at the ends suggest that all speakers are frontally aligned and a look behind the fabric covering confirms this assumption. It appears also that respect treble, mid and bass range, only five chassis come in the dimension, unlike the Panorama 2 with its nine drivers and the classic division of labor used, the (almost) use all the entire frequency spectrum. To take over the four outer Broadband speaker, also supported by two bass reflex tubes, the picture of the low frequencies in community work, while the center speaker is only frequencies from about 200 Hz to favor speech intelligibility. In addition, all five drivers are also responsible for the midrange and treble reproduction of the respective channel, the latter being carried out by the integrated dome tweeter in Focal typical invert principle. In principle, the dimension can be combined with any subwoofer. Even more than in B & W, but the appropriate Focal imposes itself dimension Sub downright on, because it is installed as an additional element on the Soundbar and so both components merge into one. As the Focal Soundbar has no directional speakers, take care here produced exclusively via DSP Verzögerung- and phase effects in combination with wall reflections for the spatial representation of surround mixes. Also to shape the sound individually and apart from Dolby Pro Logic II support Dimension and Panorama 2, the same sound formats Accordingly, there are a number of ways. As regards the connections, there are some significant differences. The HDMI equipment is less plentiful (1x HDMI In, 1x HDMI-Out), but are more inputs and outputs for audio signals available (1x analogue Aux input, 1x digital Aux input, 1x Sub Line Out, 1x dimension Sub Out). Furthermore, it is possible thanks to the optional Bluetooth adapter to stream music directly to the soundbar. The operation is done in the dimension via touch panel on the front and rear selector switches. In addition, an infrared remote control includes at Focal supplied and the CEC protocol is also supported. First of all we would like to explicitly point out that both models are installed by us in different screening rooms and this fact influenced the respective performance of course. Moreover, our test material is of course only partially representative, and – Attention truism – Sound always a matter of taste. Nevertheless, certain basic trends in the tuning of both devices can be identified that are to be outlined here once. So our test run began with a recording of the first sentence of Benjamin Britten’s “Simple Symphony” that was valid both in a surround mix in stereo as well and was first played over the Focal dimension, including dimension Sub. Here, the sound turned in both variants to be extremely lively, precise, differentiated and calmly, with the surround version again sounded a little more relaxed in the heights and overall pleasant space without this effect would have seemed exaggerated. A few meters further had the differences can then hardly be greater. The Panorama 2 (without a subwoofer) hurls a surround version downright opposed and shall in significantly less subtle to the point than the opponent by Focal. Yes, this power is overwhelming and the room is definitely filled. But somehow that sounds after a bit too much of a good thing and the Panorama 2 trims the classical recording bit too much towards blockbuster soundtrack. In the Stereo Mix this impression into perspective partially, to the fundamental character of the Bowers & Wilkins sound bar that changed course, nothing.

As the 2014er remake of Godzilla then wandered in the same place in the drive, but any reservations in literally were blown away. The crystal-clear speech intelligibility that very present spatiality (also from rear left and right) as well as the hearty Play thunderous special effects without any loss of control impressed sustainably. The polynuclear basic tuning of Panorama 2 sounded absolutely right in this case and you suddenly found herself wanting to stick to just sit, to prevent a spontaneous movie marathon. After another change of settings (reluctantly) quickly confirmed the suspicion that the dimension which presumably so could not afford. Your rather dominated beings, coupled with the relatively discreet spatial representation was the ‘wow’ factor, which had recently set its closest competitor, does not reproduce. During the height display very precise and finely resolved looked like already in the music playback, the Focal Soundbar had despite the subwoofer with bass intensive noise and sound effects with regard to power and sophistication at a disadvantage and could, in the context of our test ultimately not the dense and engaging theater sound the Panorama 2 to produce.

Both models succeeds in fact to dispel the skepticism initially addressed in many ways and is recommended as a true alternative to the classic two- or 5.1-channel speaker set. While one gets the impression in the dimension due to numerous audio connectors, the streaming capability and the sonic tuning, the most natural and cultured (music) Play is a central concern of the developers have been, Bower & Wilkins seems the Panorama 2 the focus slightly to have more down towards the very large and dramatic cinema sound. As already indicated, a separate Direct is however strongly encouraged to align their own sound preferences, and personal media use with the different qualities of both devices. Certainly, it is presumptuous to assume that an arrant HiFi Enthusiast his beloved plant replaced with a soundbar and probably for the operator of a well-kept home theaters, the same applies, nevertheless make the presented sound bars astonishing amount correctly and thus come as a solution for a number of different scenarios in question.