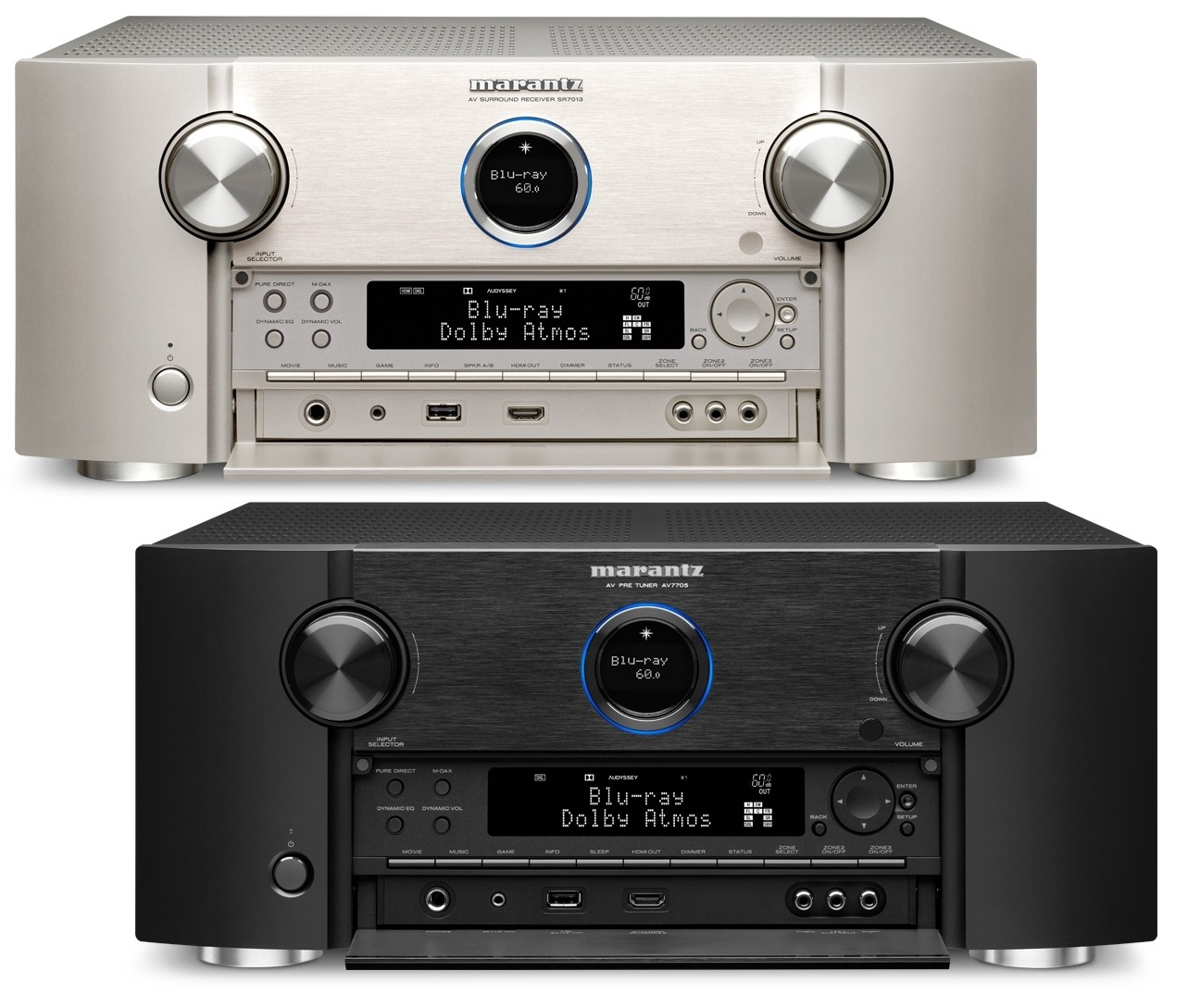 18. December 2018
With the SR7013 9.2-channel AV receiver and the AV7705 11.2-channel AV processor, Marantz has once again surpassed itself. Let's take a quick look at the two giants that expand the Japanese home theater series. They both excel with the latest audio and video technology and have some highlights.

First of all, it should be noted that the two new AV components from Marantz have many interfaces. Of course, they are state-of-the-art in terms of video technology: the 3D sound formats Dolby Atmos, DTS:X, Auro-3D decoding and upscaling to 4K are child’s play for them. As a bonus, a free update will be released at the beginning of next year, which will also guarantee IMAX Enhanced. This is a system that allows the impressive IMAX experiences to be enjoyed in the home cinema with DTS and HDR technologies. This promises first class audiovisual cinema entertainment!

In addition, the two Marantz models also offer the latest audio technology: Bluetooth, Apple AirPlay 2 and online streaming are part of the good sound. In addition to streaming, ultra-high-resolution audio files are played and Amazon Alexa and Siri have integrated ex-works. Spotify and Amazon Music can be played via the already implemented Heos module, which also includes multiroom compatibility. Also worth mentioning: Chromecast and Google Assistant are not supported.

Differences between the models

What about the differences between the two AV components? While the AV7705 multi-channel AV preamplifier is available in a black version, the SR7013 network AV receiver also comes with a silver-gold model.

With its nine integrated power amplifiers, the SR7013 becomes the fundamental component of a home entertainment system. The conversion from analog to HDMI and upscaling from SD/HD video sources to up to 4K are, as mentioned at the beginning, highlights of the high-performance video component. Since the receiver supports 11.2-channel processing, an external stereo amplifier can even be used for 11.2-channel setup. The eight HDMI inputs that support HDCP 2.2 should also be mentioned in this context, one of which is located on the front panel. The model also has three HDMI outputs with support for HDR, Dolby Vision, Hybrid Log Gamma (HLG), BT.2020, and more, allowing the connection of a large number of players. Streaming (Deezer, Spotify, Amazon Music, Tidal) and Internet radio are of course available, as well as the integrated WLAN, Bluetooth and a USB audio input on the front. The icing on the cake is the moving magnet phono input (MM), which also allows vinyl lovers* to enjoy the AV receiver to the full. This makes the receiver an all-rounder at the highest level.

The AV preamplifier AV7705, in turn, offers the functions of the SR7013, but without the amplification. It is, therefore, a combination of AV preamplifier and multi-channel power amplifier. Short signal paths guarantee an unadulterated sound – after all, a sound is the decisive feature of the model.

To convince yourself of their impressive functionality and class, both Marantz models are available for demonstration in our home cinema studios.