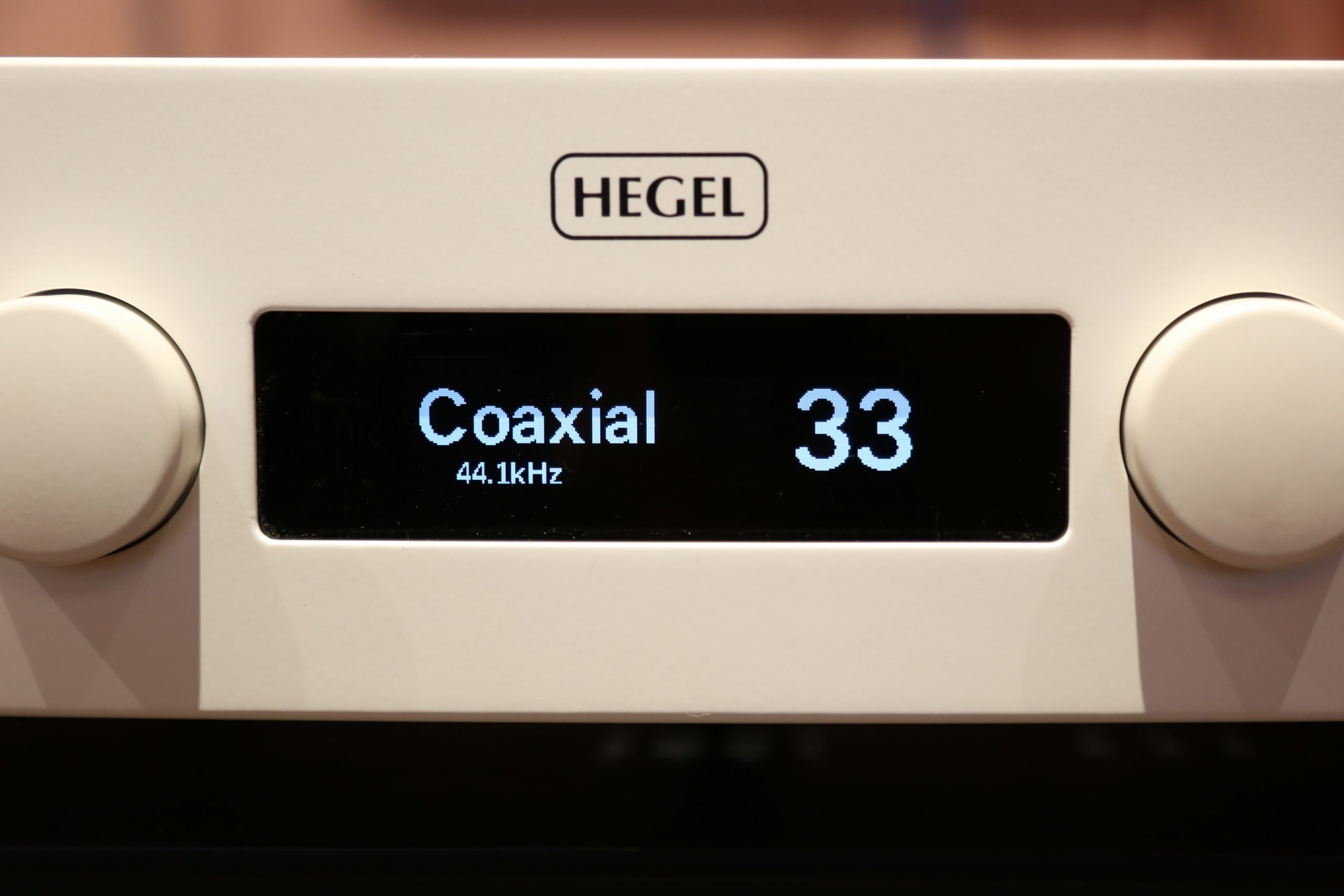 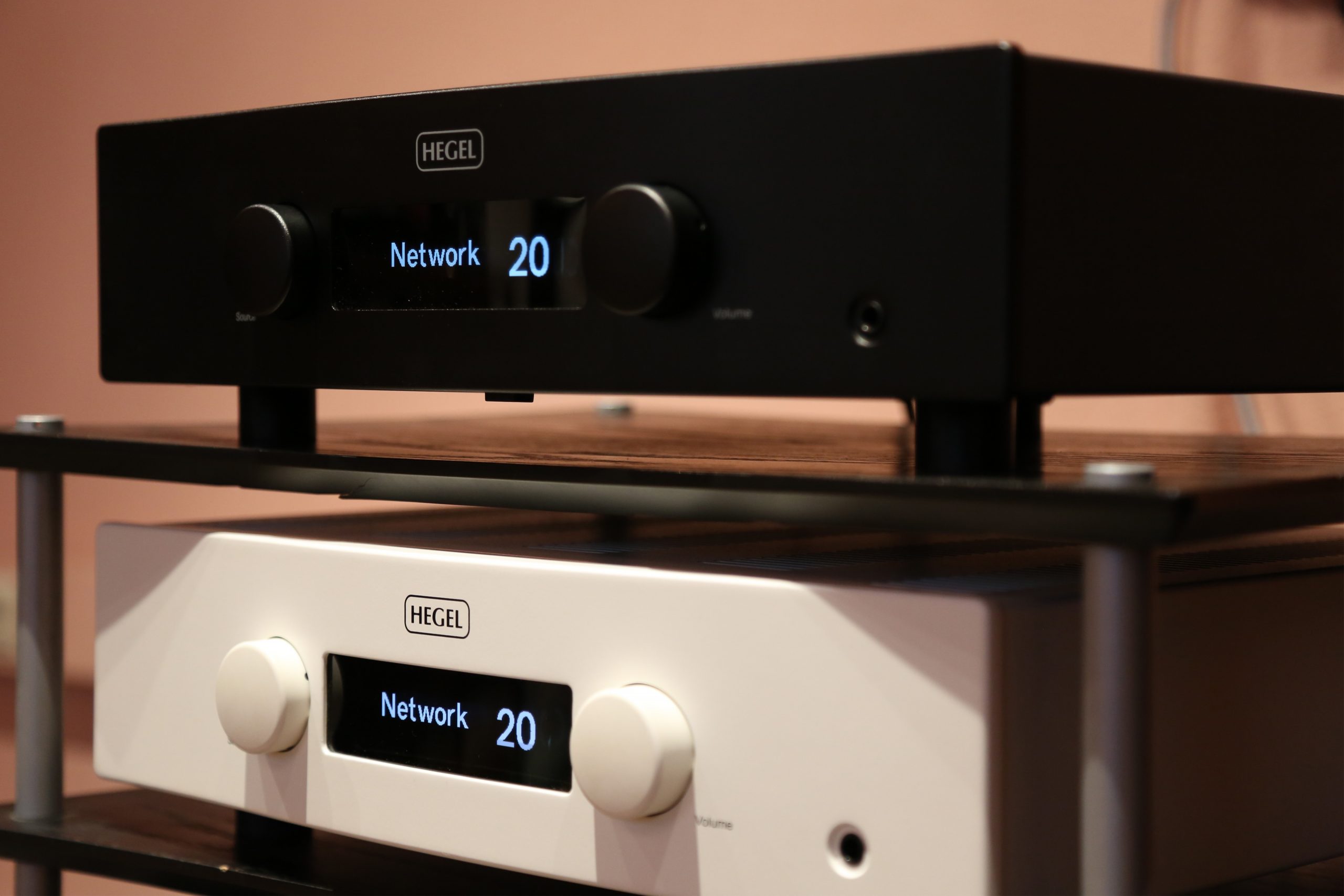 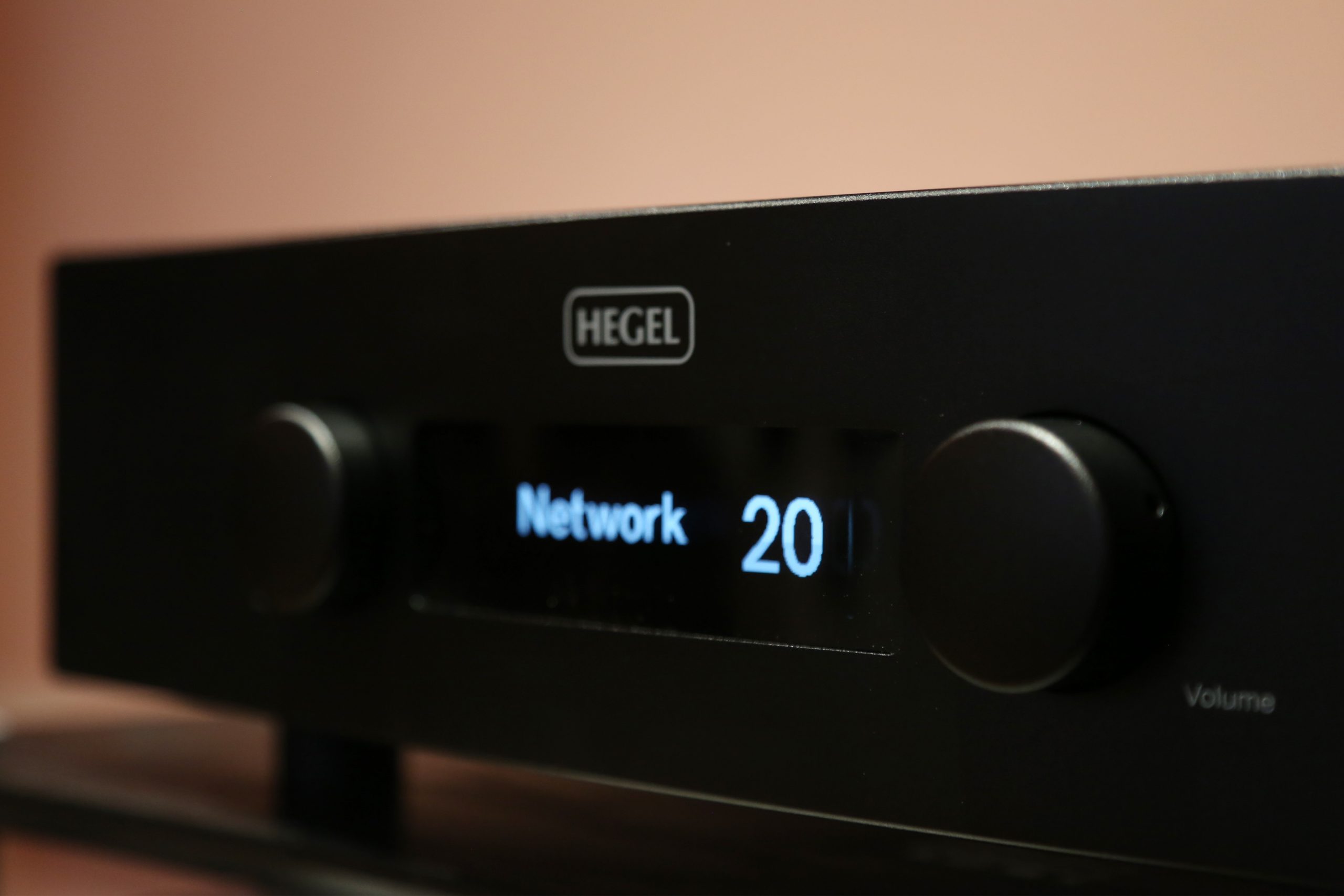 15. September 2020
We're delighted to welcome hi-fi legend Hegel to Kreuzberg. The Norwegian company established itself on the hi-fi market in the '90s as an innovative brand with groundbreaking ideas. In addition to the four streaming full amplifiers H95, H120, H190 and H390, we're also adding their high-end CD player Mohican and the D/A converter HD30 to our range.

Bent Holter, the founder of Hegel, refused to accept a signal being distorted by an amplifier electronics induced distortion. By breaking away from classical approaches, he developed a unique circuit technology, known today as SoundEngine technology, which can be found in all Hegel amplifiers. By combining the advantages of Class A with those of Class AB amplifiers, Hegel enables minimum distortion with maximum power. Mini-computers connected in parallel at each amplifier stage, check the signal for distortion. When a distortion threshold set by Hegel is reached, the sound engine generates an inverted phase signal and eliminates the distortion. This prevents the distortion from being increased in any further amplification process. Instead, a distortion-free signal is sent to the speaker output. Another noteworthy aspect of the Hegelian product line is DualAmp technology. Since the amplifier and voltage stage are treated separately, components more suitable for the purpose can be used. A strict division of labour can also be found in the power supply due to Hegel’s DualPower power supplies. The result of their efforts is clear, natural sound, without artefacts — in other words, it is possible to hear.

In keeping with Hegel’s holistic approach, their precision reproduction devices come in a Scandinavian simple and high-quality design. With their classic curved front, two large rotary controls and a high-resolution OLED display, they are guaranteed to make a good impression in any living room. Their design language, which is characterised by minimalism, follows the approach “less is more” and dispenses with everything that is not conducive to sound. As a result, their products stand on just three decoupling bases instead of four.

H95
Even with Hegel’s entry-level model, it borders on understatement to speak only of a mid-range integrated amplifier. Thanks to its Ethernet connection, it opens up the possibility of network streaming. In addition to uPnP/DLNA streaming, it also allows audio data to be played via Spotify Connect and Apple AirPlay.
In Hegel’s case, what other manufacturers have written directly on the cap would have been part of the company’s own modesty. Despite this, the H95 offers a 3.5 mm jack for headphones on the front, two high-level inputs and five digital interfaces (coaxial, three TosLink, and USB-B) on the rear, as well as a wide range of connection options. All of its inputs are fixed level configurable, making the H95 ideal for integration into a home cinema system. With a power output of 2x 60 watts into 8 ohms, combined with its superior damping factor, it is also capable of driving larger speakers. The new and improved SoundEngine 2 provides a low-distortion output signal, thus allowing a great listening experience at a fair price. 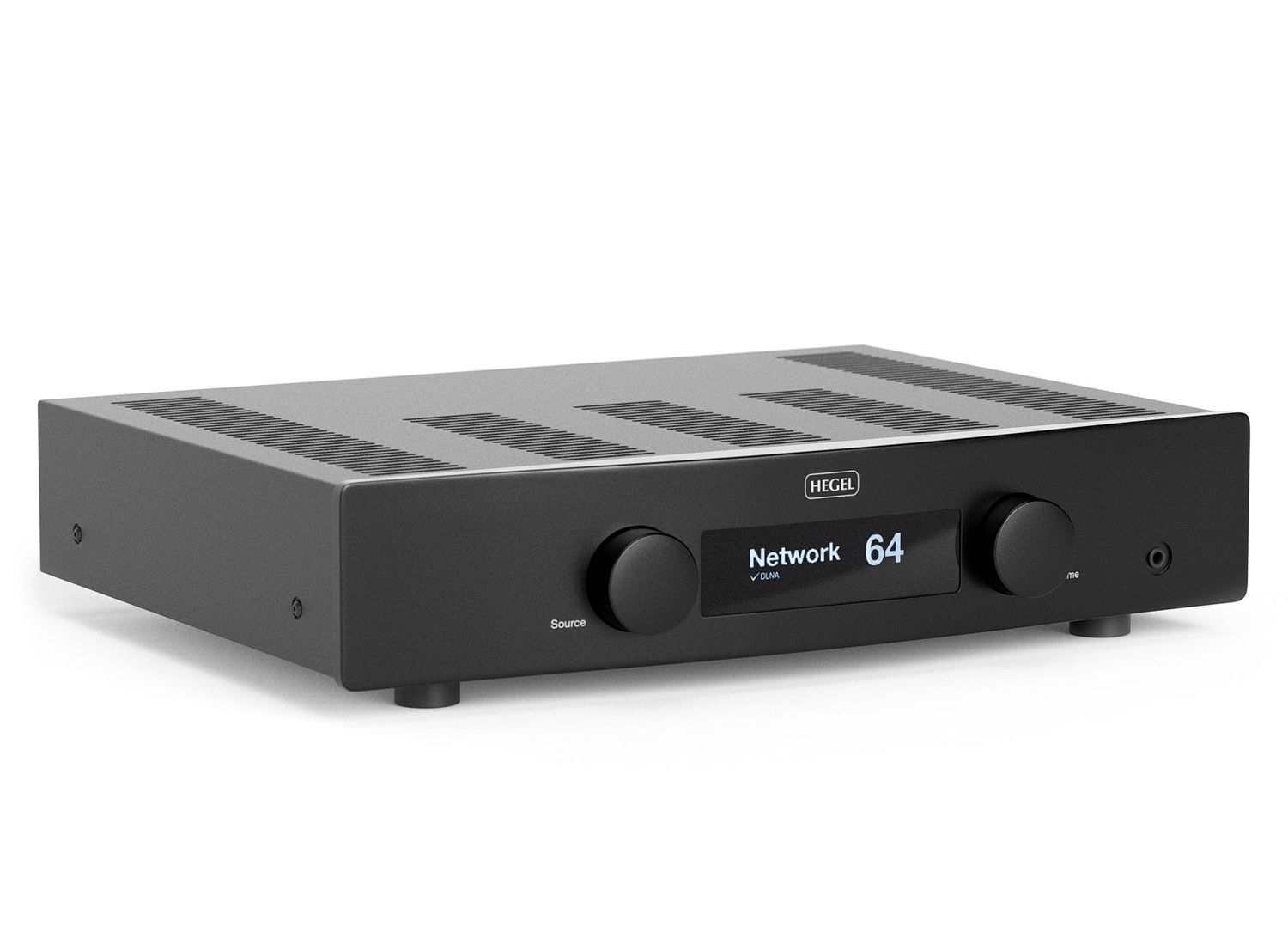 H120
In Hegel’s D/A converter modules, the master clock is located directly on the DAC board. This reduces jitter and errors in the digital-to-analogue conversion to a minimum. To avoid further quality losses, no data exchange takes place via radio, i.e. neither WLAN nor Bluetooth. Instead, the H120 has an Ethernet connection and can therefore also be used as a streamer. Via uPnP, data can be played back from the local NAS – for example, a USB stick in a DLNA-compatible router. The H120 Spotify Connect is also compatible with Apple AirPlay and can even be used as a Roon Endpoint after a scheduled update. It also features three analogue line-level inputs, two of which are RCA and one XLR, with levels that can be set for use as a pre-amplifier, for example. A coaxial S/PDIF input, a USB-B and the network connection form the digital section. As a bonus, there is a 6.3-millimetre headphone jack on the front panel, fed by its own pre-amplifier module. 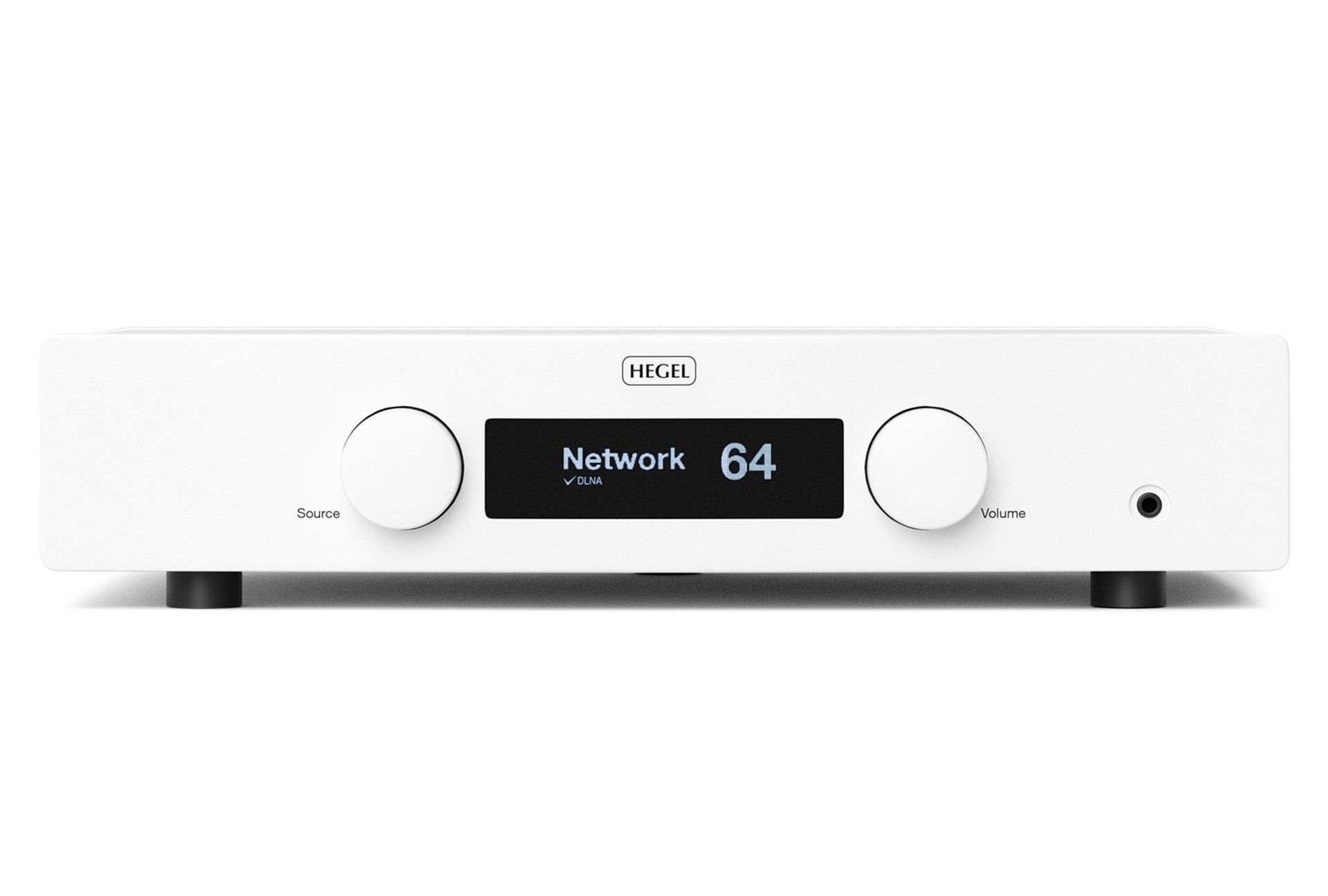 Just like the amplifiers described above, the H190 is not just one. Using apps such as Linn Kinsky (Apple) or Bubble-UPnP (Android), the H190 can also be used as a streamer and can be easily controlled via tablet or smartphone. Hegel refrained from developing his own app in order to put the full cost and effort into the product itself, and preferred to leave everything else to “the professionals”. This pays off, and the successor model to the H160, in typical Hegel fashion, impresses with its sonic precision. The H190 is not disappointing in terms of interface technology either – one balanced XLR and two unbalanced RCA inputs are matched by one coax and three optical Toslink interfaces. In addition, a USB-B and an Ethernet port allow direct connection to a laptop or network router. The H190 also supports popular streaming providers such as Spotify and Tidal. The amplifier is also AirPlay and soon Roon compatible. Two line outputs, one level-controlled and one fixed-out are complemented by the headphone jack on the front panel. The power amplifier delivers 2 x 150 watts into 8 ohms, which means that the H190 is even capable of getting quite a bit out of larger floorstanding speakers from 2 ohms upwards 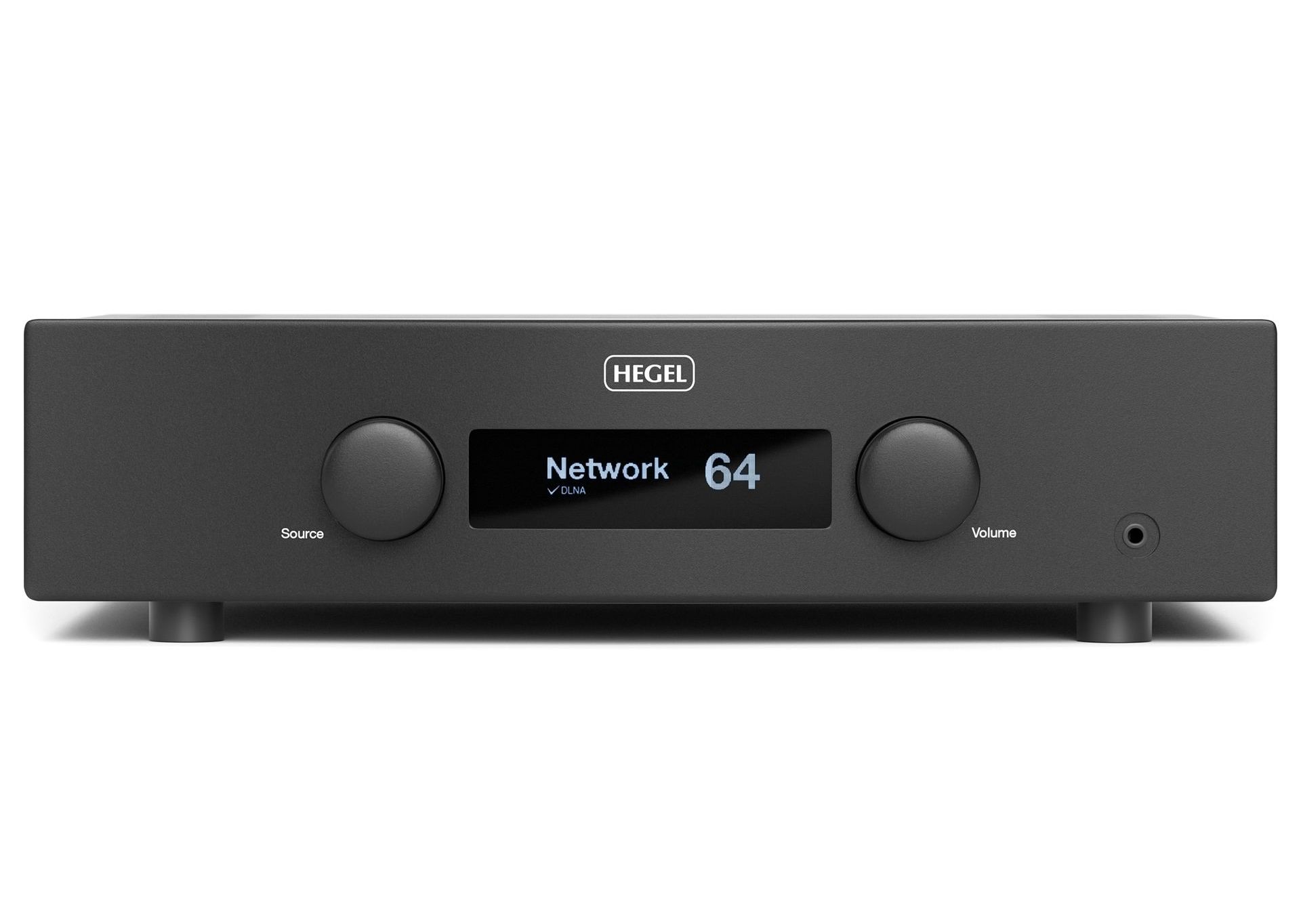 H390
The H390 is Hegel’s cheaper version of their reference integrated amplifier H590. With an impressive 2 x 250 watts into 8 ohms it offers excellent sound at a fair price. The built-in high-end D/A converter is capable of processing high-resolution audio formats such as PCM, DSD to DSD256, MQA and even MQA 8X. Furthermore, analogue XLR or RCA connectors are available, and the H390 also offers the option of using an external DAC via BNC-out. In addition, all relevant digital inputs are available with one coaxial, three optical Toslink and one USB-B interface. It also has an Ethernet port, which allows cable-based integration into the home network. Apple devices such as the iPhone or iPad can be used as control points via AirPlay. Of course, the integrated amplifier is also Spotify Connect compatible as well as “Roon ready”: the volume bypass function allows the amplifier to be integrated into a home cinema and the volume to be controlled separately via the respective receiver or player. In an appealing housing with an uncomplicated user interface on the front panel, it combines first-class design with unerringly clear sound. 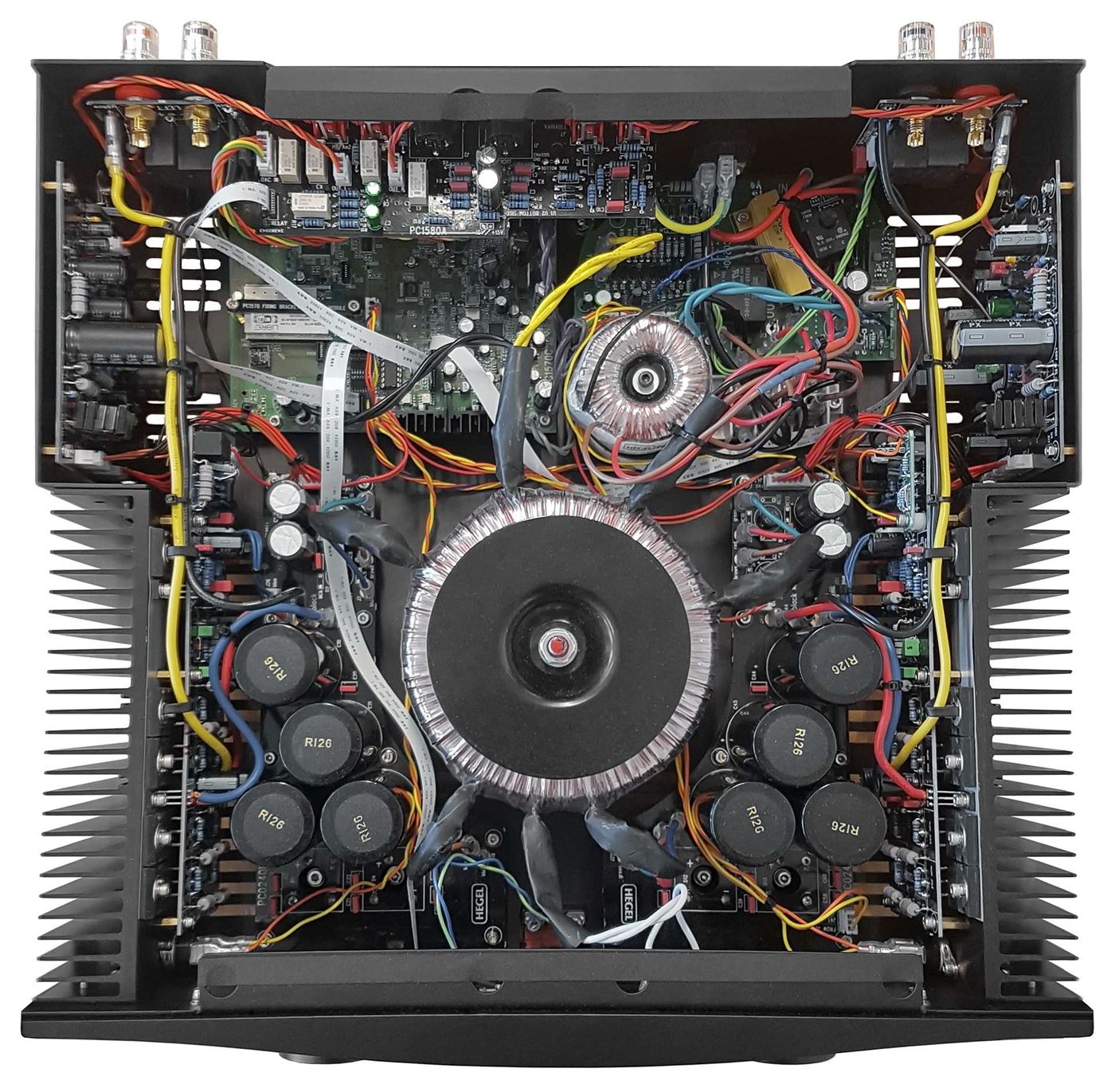 HD30
With a total of eight digital inputs and a choice of balanced (XLR) or unbalanced (RCA) output, the HD30 is the ultimate interface for enjoying digital music in the highest quality. Sophisticated power supplies and the separate power supply for the analogue and digital sections of the converter ensure exhilaratingly low-noise power supply. First, the supplied mains current passes through a filter stage to exclude external interference, after which the two 32-bit DAC chips installed are capable of converting digital audio signals at up to 192 kHz into an analogue signal. The HD30 is distinguished by its impressive tonal and dynamic spectrum. In addition, the volume of attenuation control allows direct connection to a power amplifier or active speaker pair. The SoundEngine is also used in the HD30, eliminating distortion, among other things. Thanks to the three optical inputs, it is also possible to connect a television, SAT receiver and Bluray player. The DSD-compatible USB port allows you to connect a laptop as well. The HD30’s Ethernet interface allows it to be used as a bridge itself, thanks to the built-in UPnP-compatible streaming module. It also supports streaming via AirPlay. 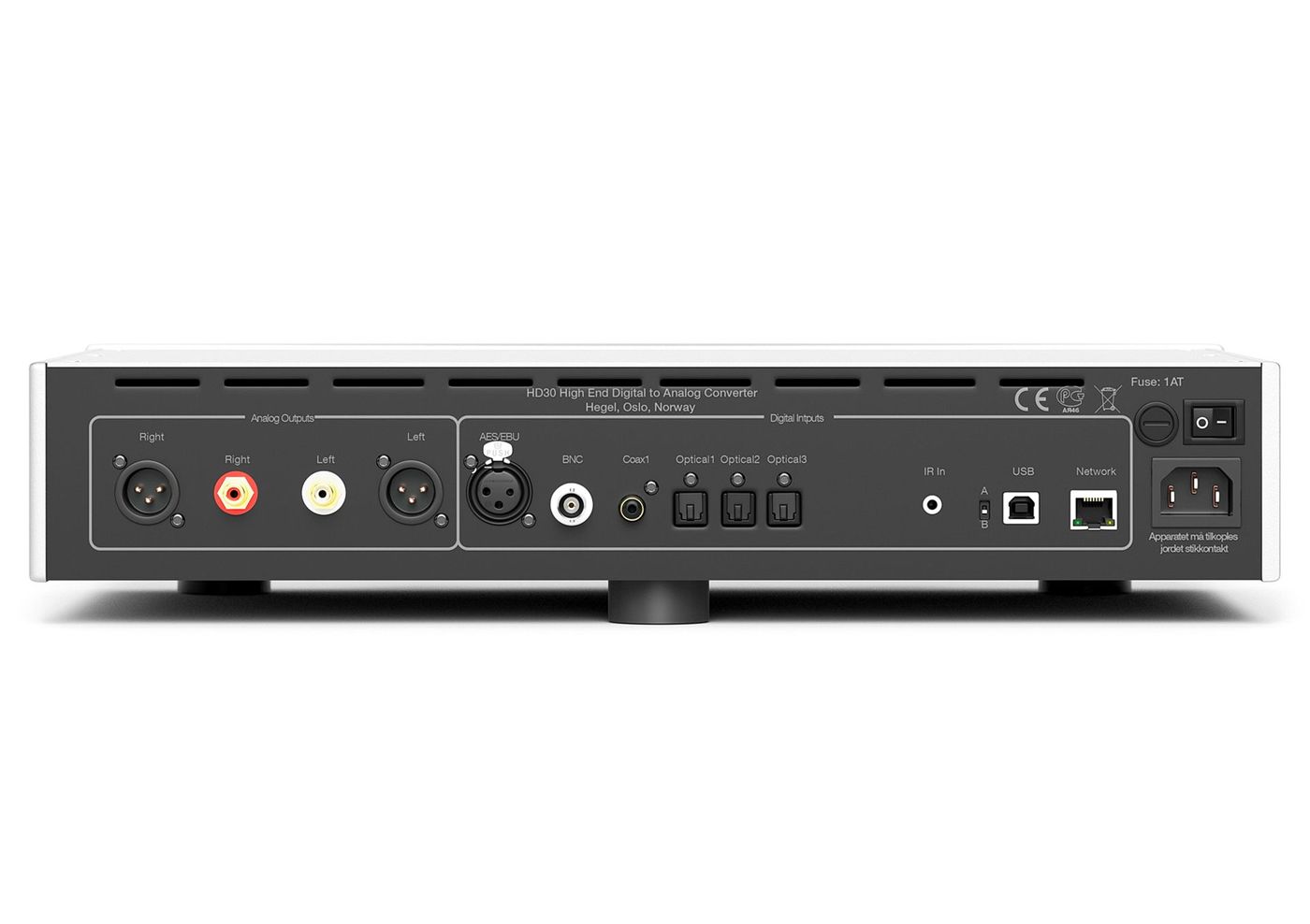 Mohican
Hegel is certain: The Mohican is the last of its kind. It is a CD player that specialises entirely in CDs – a rarity on today’s market, where all-rounders are in demand. A clear disadvantage of universal devices always remains that their multifunctionality is reflected either in price or quality. For this reason, in addition to its wide range of excellent HiFi pre-amplifiers and forward-looking integrated amplifiers, Hegel is launching a true hero of its trade on the market in the form of the Mohican. Even if it means that SACDs cannot be played back, the Mohican does what it is supposed to do at the highest level. Also impressive is Sanyo’s quiet and precise drive with servo control developed by Hegel himself. The signal processing works with “True 16 Bit/44.1 kHz” – which means that it has been optimised for the usual resolution of audio CDs alone, so there is no question of quality losses. A particularly outstanding D/A converter makes jitter-free playback possible and allows it to be connected directly to a pre-amplifier or integrated amplifier via an analogue path. The high-quality BNC output also allows the audio signal to be digitally forwarded. In addition, there is a choice of unbalanced RCA connectors or balanced XLR terminals. In the output stage, SoundEngine 2 ensures a distortion-free output signal. 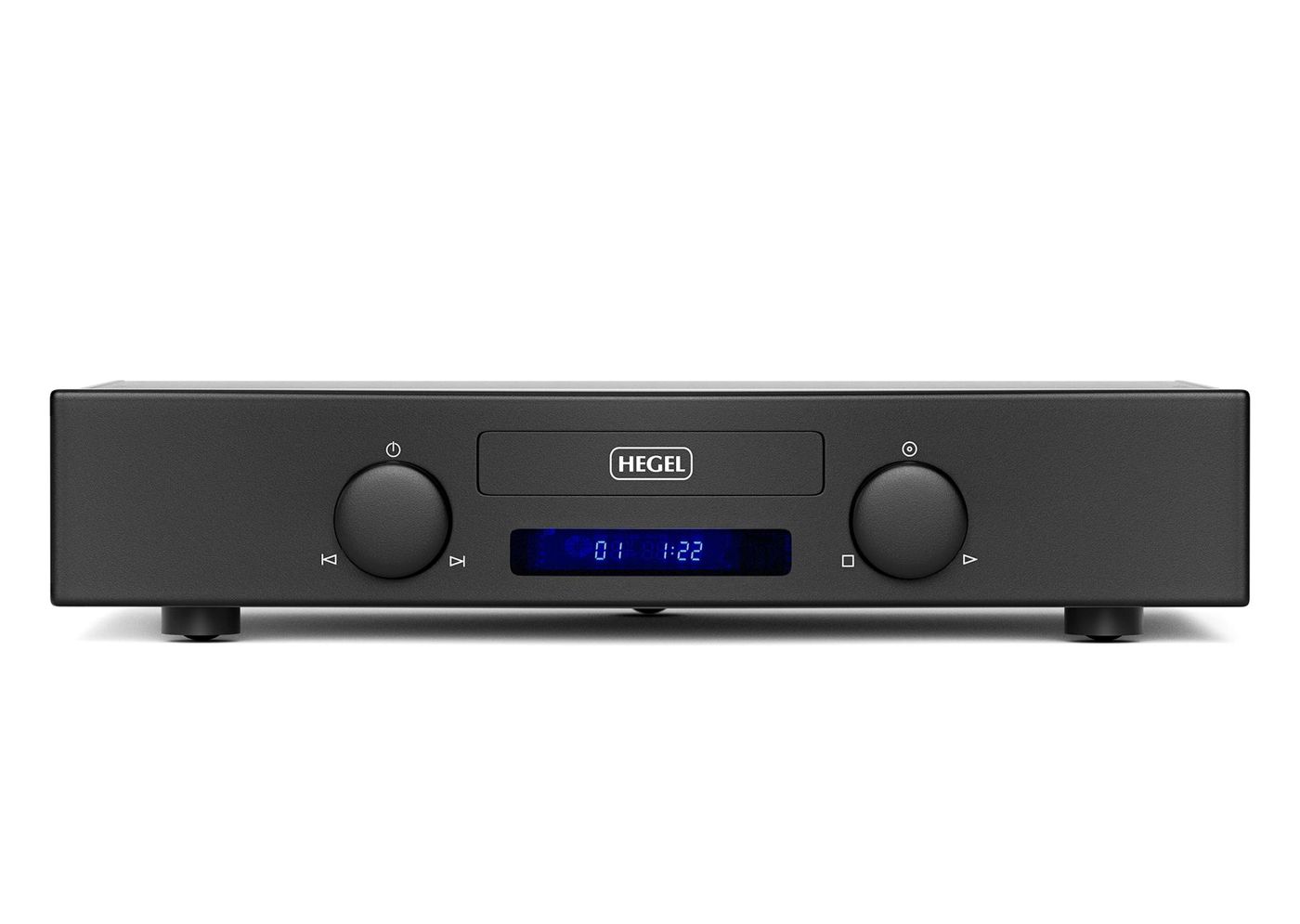 Final Thoughts:
Hegel’s amplifiers, DAC and the Mohican are characterised not only by their precise workmanship of high-quality components in an aesthetic appearance but also by their crystal-clear, undistorted sound. Hegel’s products are the best choice especially for music purists* who place a lot of emphasis on the details in the music. Anyone who would like to see Hegel’s unadulterated music reproduction for themselves is cordially invited to come and try it out in our shop.

The LG 75NANO Television: Anything But Small!