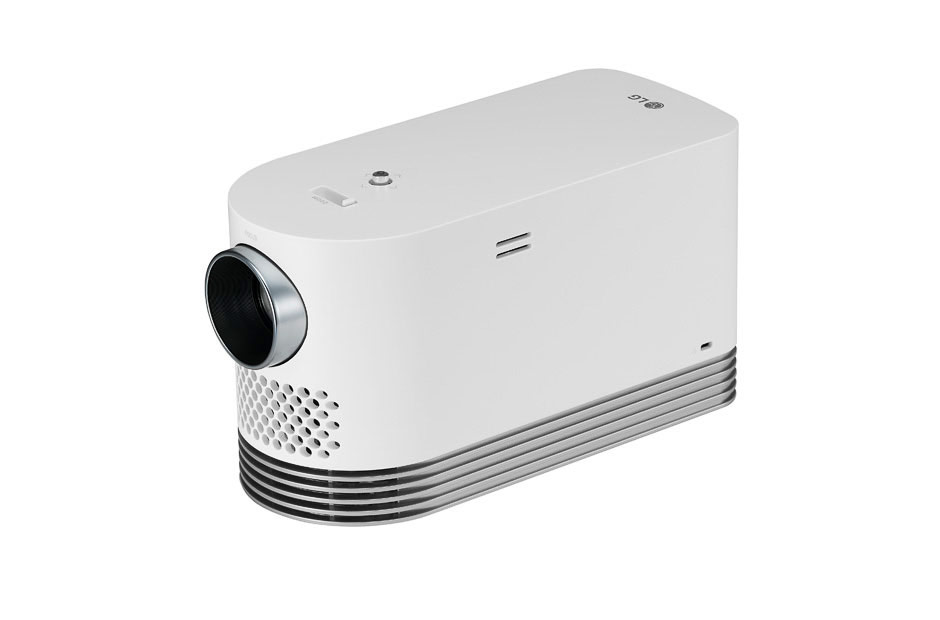 16. March 2017
LG has hit the nail on the heads with its compact projector solutions. Thanks to a modern projection unit and additional entertainment functions, the small projectors, which were originally less designed for the entertainment area, have become a real alternative for small soccer fans or spontaneous film adventures. The latest product from this series the LG Andante, has a laser light source for the first time, thus creating a much brighter picture.

The technology of the LG Andante works basically according to a well-known principle, it is a typical DLP projector. This projection technology – DLP stands for ‘Digital Light Processing’ – thus consists of three central elements: light source, colour wheel and Digital Micromirror Device (DMD). The latter is a chip on whose surface a large quantity of very small mirrors is attached. Each of these mirrors represents a pixel and is tiltable by an electrostatic pulse. There are only two tilting states between which switching is made, either the light is reflected or is not reflected. The regulation of the brightness of individual picture elements results from variations in the duration of the tipping intervals. Rare switching results in greater brightness, fast switching up to 5000 times per second results in correspondingly darker pixels. Before the light hits the mirror and is finally reflected on the screen, it passes the color wheel. The finished image impression finally results from the rotational speed of the wheel, the tilting of the mirrors and the inertia of the human eye. In contrast to the classic version – a conventional projector lamp – or the LED light sources used in the predecessors, the LG Andante now has a laser module. This allows LG to increase the brightness compared to the predecessor of 1400 lumens to a whopping 2000 lumens, while maintaining a high longevity and constant brightness. This extra light is, of course, invaluable, especially in less favorable light conditions. In conjunction with the various options for image adjustment and color calibration, including the customizable inter-image calculation “TruMotion”, a truly convincing image can be generated. The optical zoom (1.1x) and the 4-point trapezoid correction for eliminating distortion caused by the scene are also very useful functions to make the portable projector really flexible to use.

The LG Andante is also flexible with regard to the range of functions. The multitalent is equipped with the LG’s TV-devices webOS 3.0 operating system, which not only provides a comfortable configuration of the picture, but above all also numerous SmartTV functions. For example, Netflix, Amazon Video and Maxdome, Google Play Movies and Google Play Music can be accessed directly on the large streaming portals, a web browser and YouTube are also on board. Furthermore, the compatibility of the MiraCast standard with the compatibility of smartphones and tablets can be synchronized, as are the DLNA protocol and the LGs TV Plus app. It is controlled by the LG Magic Remote, which is included in the scope of delivery.

On the rear of the LG Andante there are numerous interfaces, some of which directly reflect the additional functions. This includes, for example, the Ethernet socket (a WLAN module is also integrated), the USB inputs for connecting external mass storage devices as well as the digital (TOSLINK) audio output and the headphone connection. There is even the possibility to transmit audio signals via Bluetooth to an external sound system, but in the event of an emergency, a small stereo loudspeaker has also been integrated. Much more common are the HDMI inputs, whereby the main input thanks to MHL (Mobile High Definition Link) content can also be transferred directly from the smartphone or tablet. Anyone who like the concept need not look further than the Andante. The clearly increased brightness and versatile possibilities without lots of technology to project films and series are good arguments for the compact projector from LG. We are expecting LG Andante to arrive to our showrooms in the middle of April.

Coming soon: The Blu-ray Recorder for Satellite And Cable From Panasonic