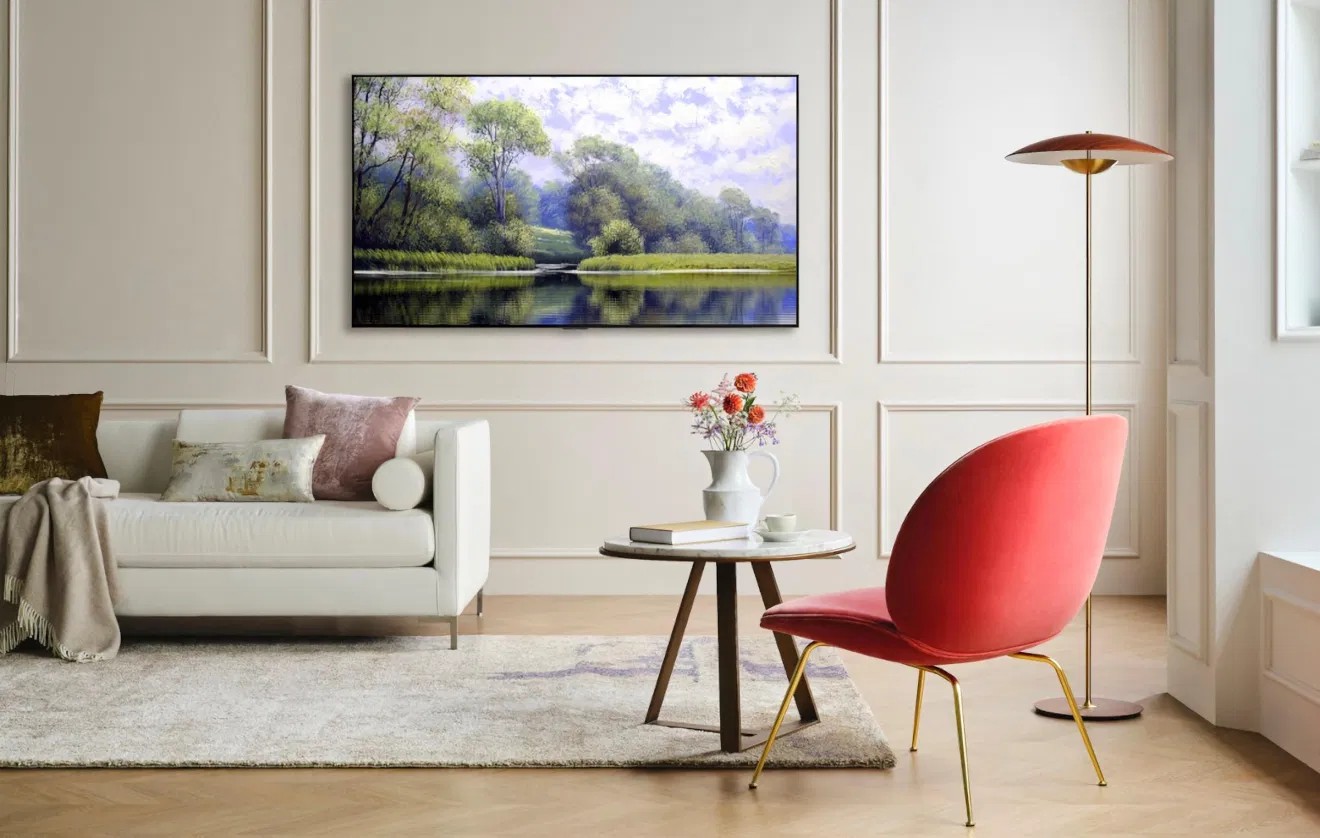 13. December 2021
The Korean company LG presented its new G1 OLED evo TVs at the CES. They were the first to be equipped with the new evo panels and are supposed to shine with more brightness thanks to them. We will take a look at the truth in the following.

The new evolutionary stage in OLED is introduced by LG with the Evo models. They promise more brightness and higher-contrast pictures thanks to higher luminous intensity. Exactly what you want from your TV these days. This comes across particularly well visually because the TV can be hung almost flat on the wall (an optional stand can be used), which lives up to the name. The G stands for Gallery, which refers to the picture-in-a-frame design of the TV and replaces the old Wallpaper series. The metal frame is so thin that not even the LG logo is displayed on it. By the way, the suspension is possible by leading the connection cables downwards in grooves in the TV’s back.

And what exactly are the Evo OLEDs all about? A new light element has been added to the OLED panel. In combination with the new Gen4 processor, this creates a brighter, sharper and more powerful picture. The most important HDMI 2.1 features are supported on all four HDMI inputs, including Dolby Vision IQ, of course. That’s what you can expect from LG. Ultra HD picture quality, 4K signal processing capabilities, and AI technology are also present. A powerful 4.2 channel system including Dolby Atmos was further integrated.

The WebOS interface has been redesigned and is now even more user-friendly. This includes a bar with recommended content based on what has already been watched. In this context, the remote control (Magic Remote) has also been revised. It is thinner and fits better in the hand than its predecessors. It has a microphone for voice control of the TV and a Trackpoint. There are also buttons for Google Assistant and Amazon Alex, Netflix, Amazon Prime Video, Disney+, and LG Channels. Another new feature is the integration of the Twitch app, which is interesting for gamers, among others. They were also considered when developing the new TV because the OLED needs switching times of one millisecond for gaming and promises low input lag. Gaming is supposed to be possible in 8K/60 hertz with enabled G-Sync and RayTracing.

Finally, it can be said about the picture looks exceptionally three-dimensional and is razor-sharp. The shades of white and black are convincing, the colors look smooth. The improved dynamic tone mapping algorithm delivers contrast enhancement. The sound on the other hand seems clear and direct, although the speakers are virtually invisible. Dolby Atmos effectively delivers width and height, and a tonal balance is clearly audible. The G1-Evo models are available in 55-inch, 65-inch, 77-inch as well as 83-inch sizes.