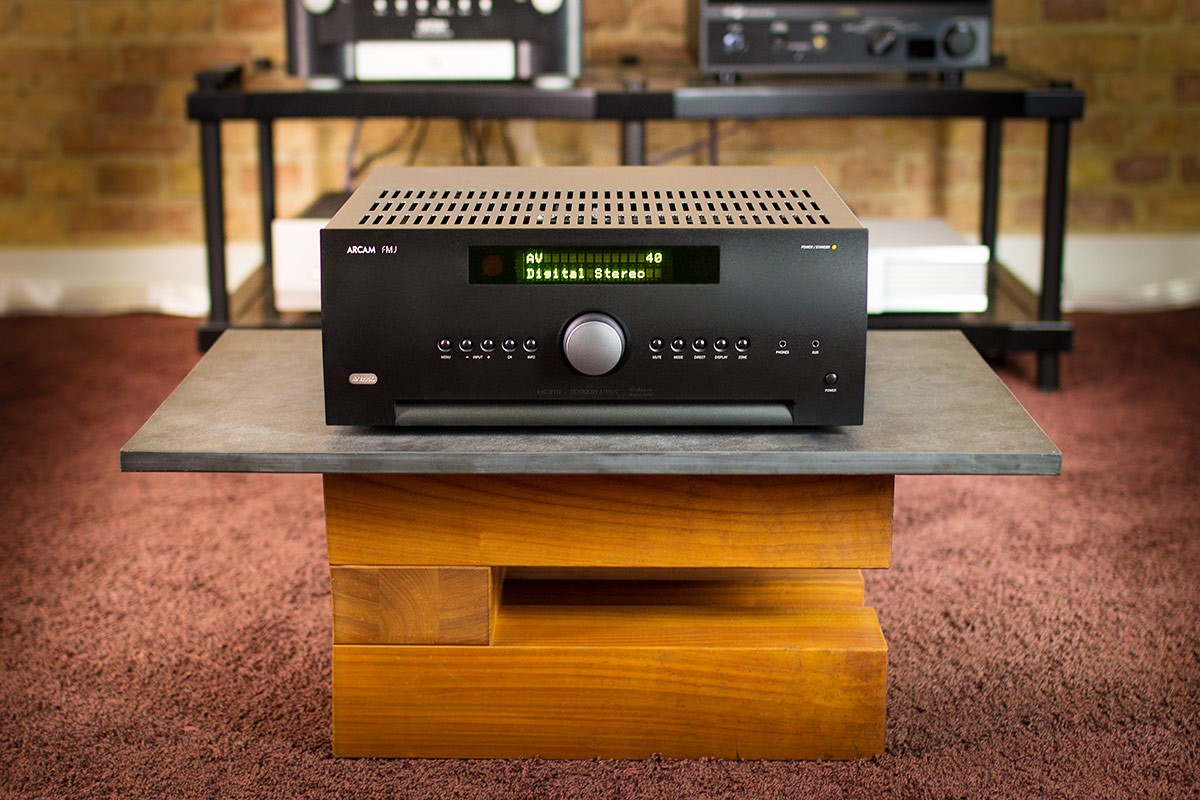 19. December 2016
In view of the company's 40-year history, one wouldn't really say that the manufacturer Arcam are exactly an industry secret and although there are probably some AV-interested people who have still not come across the British company. And with the recently introduced high-end AVR860 is just a good reason to take a closer look at the current AV program from Arcam. As a photo model, we had an AVR550 available for this post.

The company Arcam – actually Amplification and Recording Cambridge – was founded in 1976 by John Dawson near Cambridge, England, after he had already gained some experience with the construction of music reproduction systems as part of his studies. The first official serial product of the young company, the A60, was a real success and in the coming years a total of 30,000 copies left production. Well, a decade later it was the Arcam team, which built the first separate DAC for the CD player with the “Delta Black Box”, thus establishing a new device category, which is probably as relevant as never before. In the course of time, various AV systems were joined to the HiFi components, although the original audiophile requirements were never thrown overboard during these developments. Nothing has changed to this day, so it is no wonder that Arcam’s AV technology is always praised for her sonic qualities.

First, we would like to focus on the current AV receivers from Arcam. We are mainly based on the AVR850, as the two smaller versions – the AVR550 appeared simultaneously with the top model last year, the smaller AVR390 followed in 2016 – as well as the preamp AVR860 on the large Arcam receiver. The relevant differences between the devices will deal with us in the end.

First of all, it should be noted that the Arcam AVR850 makes a good impression visually and haptically. The metal front emphasizes the apparently valuable processing of the receiver, the proud weight of 16.3 kg promises solid and high-quality components. The design is reduced to the essentials and kept simple – a rejection of unnecessary frills. Interesting is, of course, the AVer receivers also the back of the device, since here the offered range of functions can already be roughly estimated:

With a total of seven HDMI 2.0a inputs including HDCP 2.2 as well as three outputs (including ARC and a 2-zone option), there should be more than enough connection options for all conventional setups. The input names “GAME”, “BD”, etc. are expressly only as orientation offer – the HDMI inputs of the installed video board are all identical. In addition, there are six digital audio interfaces (4 x coaxial, 2 x TOSLINK), a USB input for connecting mass storage devices (USB stick, hard drive) and an Ethernet socket to connect the AVR850 to the local network Module has not been integrated. Of course the Arcam receiver can also be fed in analogue way with audio signals. For this there are six RCA inputs, plus an FM / DAB antenna socket.

On the output side, we have a total of seven loudspeaker terminals, which represent, as it were, seven integrated power amplifiers – these operate according to the so-called Class G principle. Arcam is a self-developed technology that can flexibly switch between Class A and Class AB operation, depending on the power requirement. What is hidden behind these terms in detail has already been discussed in detail elsewhere. Here is just so much: The Arcam circuit offers a very good compromise between the highest sound quality and – if necessary – efficient and powerful playback. In addition, the AVR850 has various preamp-outs in the cinch format to integrate external power amplifiers or active loudspeakers. In this case, the already mentioned surround channels are doubled, two subwoofers and a maximum of four treble speakers – Arcam supports the two most important 3D surround formats Dolby Atmos and DTS: X – with signals. In addition, a stereo pre-out is available for the second zone. In this way, we would have already begun with the possible application scenarios of the Arcam Receiver. First, of course, a classic 5.1 or 7.1 setup can be realized, if necessary, a second subwoofer can be added. If only five channels provide surround sound, the two remaining amplifier stages can control either a pair of stereo speakers in a second zone or treble loudspeakers. If all seven amplifiers of the Arcam AVR850 are already used for the area, Preamp-Outs Height 1 & 2 are still available to operate a maximum of four ceiling speakers via separate amplifiers. Furthermore, thanks to the preamp-out section it is theoretically also possible to completely bypass the output stages.

In direct comparison with some competitors, you may feel that they offer even more flexibility – for example, more power amplifiers, additional zone options, analog video inputs and outputs or Bluetooth / Wi-Fi functionality. The same applies to the comparatively rudimentary streaming integration, as well as the fact that the Arcam receiver can easily handle high resolution home theater sound in the usual formats, but can also be used when playing quite normal stereo files at 48 kHz / 24 bit. On the other hand, the AV core functions are implemented in absolutely impressive quality, so that the Arcam receiver in this respect can place a large part of the competition on the seats. Here it is easy to weigh.

Keyword “impressive quality”: It goes without saying that this applies to the Dirac Live measuring system, which clearly falls into the category of high-end. The software offers a complex and precise measurement and therefore promotes very good results. At the same time, the way to get there is somewhat harder than with the competition: for example, a Windows or Mac computer is essential, since the Dirac Live software requires external computing power to perform the complex correction calculations of frequency response, runtime and phase shift. Receiver and computer must be in the same network for data exchange. A clear advantage of this method is the better overview on the computer. You get a good and structured overview of the results of the automatic measurement and can then perform manual fine tuning.

The differences between the three models AVR390, AVR550 and AVR850 concern in particular the installed power amplifier technology. The above-mentioned Class G circuit is only reserved for the top model, the two smaller models work in Class AB operation and have lower power reserves. One does not change this: according to their price class, the models still sound first class. In addition, Arcam has renounced luxurious extras such as the gold plated speaker terminals of the AVR850 and instead installed solid standard products. Overall, it is only changes of the technical architecture, the range of functions and also the measuring system Arcam happily not touched. Let’s finally take a look at the brand new Arcam AV preamp AVR860. Similar to the AV receivers, the range of functions is basically the same, but the renouncement of the power amp section and the equipment with high-quality, balanced XLR sockets opens up a new horizon: The option of compiling a home theater setup with separate power amp solutions Is not only much more flexible, but also enables powerful systems that go far beyond the potential of a fully integrated AV receiver.

The AV program from Arcam is based on the other priorities of the major manufacturers. The rather uncompromising focus on sound quality is particularly noteworthy (and audible), the implementation of the Dirac Live calibration software underscores this claim. These qualities, however, are not completely without compromises, a few equipment features you have to do without. The Arcam devices are just less an all-rounder with deep app integration and infinite streaming options, but rather real home cinema workhorses.