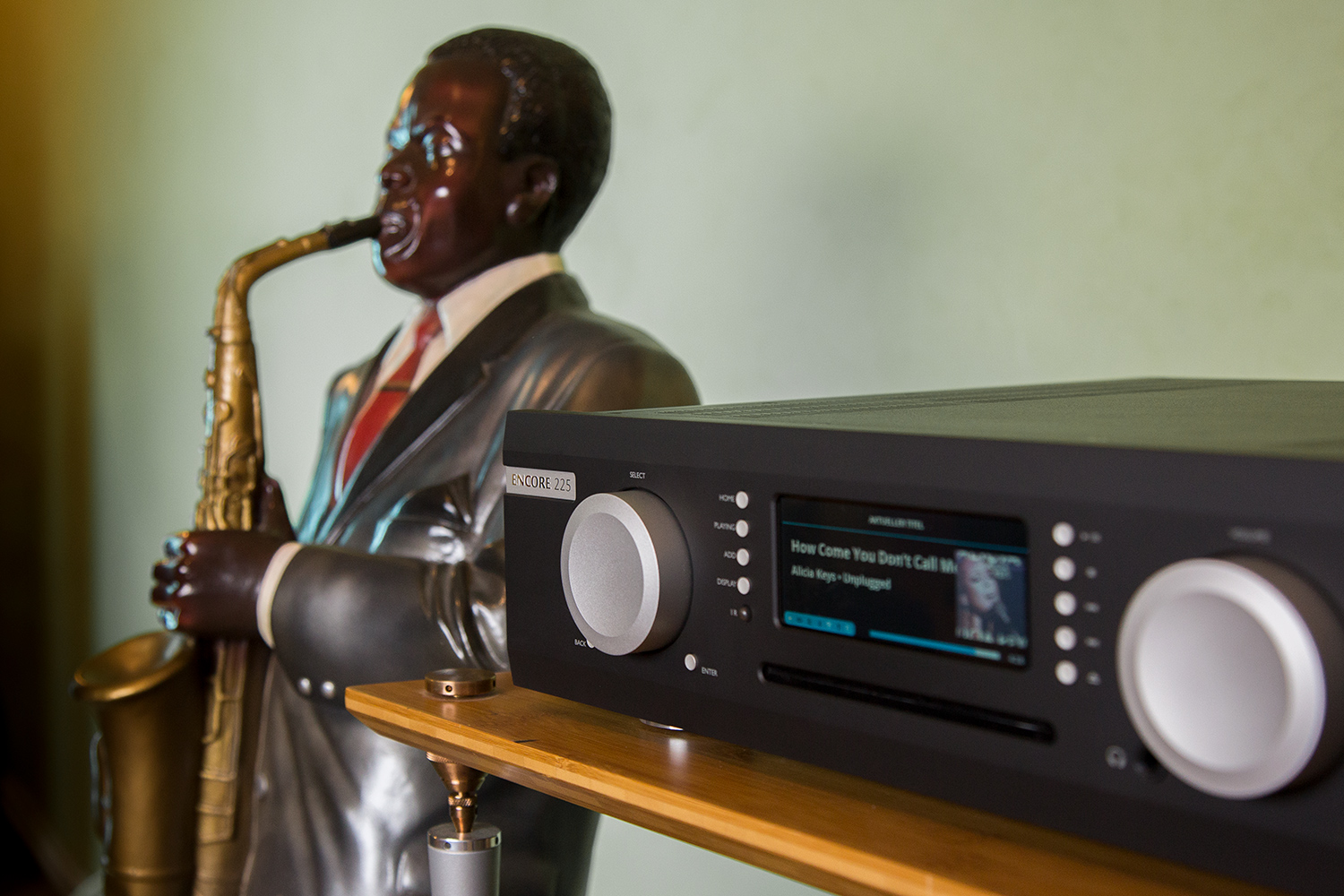 11. October 2016
Since the announcement at the beginning of the year, the all-in-one system of the British hi-fi manufacturer Musical Fidelity has been spoken for, as the complete system was met with great approval and perfectly compliments every hi-fi system. The M6 Encore models are two modern multi-format music streamers with a CD player/ripper and a wide range of connectivity options. The M6 Encore 225 has a power amplifier integrated and the M6 Encore Connect can be connected to an existing power amplifier.

For more than 30 years now, Musical Fidelity has been designing and producing hi-fi electronics and has developed over the years into a well-known company in this sector. In this article, we have presented the manufacturers in more detail.

The focus of Musical Fidelity has always been the quality of the devices. With the M6 Encore streaming systems, two great all-in-one HiFi devices have been designed, which are excellently processed and have much to offer. We recommend sourcing such equipment from your specialist dealer so that the models can be used without problems.

Front and Back Panel

Even the aesthetics of both M6 Encore models is strikingly beautiful, as they have a symmetrical, clear design, which gives a clear, tidy impression. On the right side of the front are the volume control as well as a headphone input and a USB slot. Currently USB devices can be recharged at the slot, and a software update will also allow the playback of music from a telephone.
On the left is the Select wheel. With this and the Enter and Back buttons, you can navigate through your music library and fully operate the device.
In the middle is a large high-definition color display, on which you can browse your own music collection comfortably. The individual features of the system are selected with the control buttons attached to the left and right of it in two rows. Finally, the CD drive is under the display.

If you look at the back, you can quickly see that the M6 Encore All-In-One system has many connections and, for the sake of clarity, the symmetry has been tried. The two loudspeaker terminals are located to the left or right. Underneath the left is the 1 TB hard disk stowed, which is fortunately even removed and can be upgraded if necessary. Under the right terminal is the input for the power plug.

The network input must of course be connected to the router so that you can use all the functions of the device. This port updates the firmware automatically, which is useful as new features are added. So you do not need to worry about whether you need to update the software because it’s automatic and the Encore is always up-to-date. The customer benefits from all further developments. In addition, the device downloads the metadata and the cover from the Internet when you rip a CD.
In addition, there is a USB 3.0 (which is the latest USB standard) and two USB 2.0 inputs. These are used, for example, to expand the all-in-one system with an external hard drive, play music from a memory stick, or connect a Bluetooth or wireless adapter.
There are also three analog AUX inputs that can be used to expand the playback capabilities of the Encore 255, for example with a cassette player or a phono preamp, to which you can connect a vinyl record player. There are also digital inputs, two COAX S / PDIF and Optical S / PDIF, for example a Smart TV or a game console The M6 Encore is equipped with two sets of analog line and pre-outputs. The pre-output is variable, so it is affected by the volume control, while the line output is fixed and is therefore unaffected by the volume control.
In addition, there is a COAX and an optical S / PDIF output, among other things, to expand the system with a further D / A converter. Incidentally, the already installed, high-quality D/A converter processes signals up to 32 bits / 384kHz. It is based on the MX-DAC, which we have already presented in detail in this article.

Finally, both Encore models are compatible with many network speakers. For example, a Sonos system can be connected, which can be controlled via the app.

On the technical side

The M6 Encore is Linux-based and works in part as a computer. The device is lowered; There is no classic on / off switch.

It is remarkable how many functions of Musical Fidelity have been integrated into this device. A highlight of the M6 Encore is that it can stream radio from the Internet.
At the same time, you can transfer your entire music collection to the 1 terabyte-sized, integrated hard disk. Incidentally, there is a special version for Germany in which the integrated hard disk is 2 TB.

It is up to you whether you can rip the tracks from a CD directly onto the hard disk or populate the hard disk via the web interface.
The ribbing is particularly comfortable because the CD is automatically extracted to the hard disk as soon as you insert it. If you select the corresponding menu item, the CD drive is of course also to be used as a simple CD player.
However, you can access the web interface of the Encore using your computer’s Internet browser. This will allow you to access the hard drive to fill the database with your music. Unfortunately, the Encore is not recognized as an external hard drive. It is also possible to install plug-ins from third-party vendors via this web interface. For example, you can play Spotify, Tidal, or the playlist you created on iTunes on the Encore.
In addition, there is an app, with which the M6 Encore is operable.

The amplifier unit at the Encore 225 has end-stage transistors and is available over 225 watts per channel power amplifier. This is based on the circuit of the Musical Fidelity M6si. This amplifier technology speaks for the high quality requirements, as the M6 series meets upscale, audiophile requirements. The M6 Encore 225 with all its functions has the potential to replace classic hi-fi electronics.
The Encore Connect, on the other hand, does not have a built-in power amplifier, but can be amplifiers for existing amplifiers with its fixed output, or power amplifier and active speaker with its preamp output. It is connected to existing plants and completes them. The core point of the M6 Encore 255 is the ability to access all your music centrally. This allows you to play the tracks that you want to listen directly without much effort – a great solution to combine all the functions of a modern hi-fi system in one device.
With the M6 Encore 225 or the M6 Encore Connect you are offered numerous inputs and outputs as well as a headphone output. It is a device that is intuitive and easy to use. Apart from the small hurdle of playing the music via Internetbrowser, this has definitely succeeded.
Of course, the sound should not be missed. In addition to the versatile components, the models are high-end devices with outstanding sound. Once again, Musical Fidelity fulfilled its reputation. Recommended highly recommended!